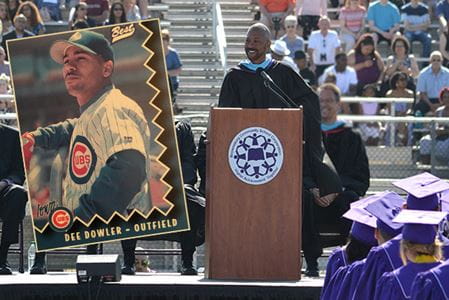 Demetrius “Dee” Dowler was 31 years old when he was diagnosed with thymoma, a rare cancer of the thymus gland. There is no good time to be diagnosed with cancer but 2001 was a particularly busy time for Dowler, a time when his life was full with a young family and a new career.

Dowler, who graduated from Ben Davis High School and Indiana State University, spent his 20s playing professional baseball. He was drafted out of college by the Chicago Cubs and played for its farm team for five years before joining the Reno Blackjacks, an independent league team that played June, July, and early August. That allowed Dowler to begin his career as a math teacher at Ben Davis High School, his alma mater. That was in 1997. Less than five years later – with a young wife and an 8-year-old daughter – Dowler found himself undergoing the toughest battle of his life.

He thought he had bronchitis because he had a cough that wouldn’t go away. His doctor recommended a chest X-ray and that revealed a mass in his chest. He was told to return in a few weeks for a second X-ray, which revealed minimal growth of the mass. His doctor said the tumor would be monitored and if the mass continued to grow, treatment would begin.

In March of 2002, his condition had worsened. That became apparent in the classroom. “I was teaching one day and my face started drooping, my eye started drooping and my voice got slurry.” His primary care doctor referred him to a neurologist who diagnosed him with myasthenia gravis – a neuromuscular disorder frequently associated with thymoma.

The surgery that followed included splitting his breast bone to remove the mass on his thymus, as well as parts of his lung and the sack encasing his heart, where the cancer had spread. Recovery from the surgery took several months, Dowler said. He also had three months of chemotherapy and radiation, treatments that lasted until the school year began in mid-August.

“I remember that I was still undergoing chemotherapy for about the first two weeks of the school year because, in spite of that, I was able to have perfect attendance that year,” Dowler said. A jock at heart, physical workouts were part of his recovery plan and he persisted until he got back in shape.

Eleven years passed with routine checkups on his chest that showed no cancer. Then, in 2013, the thymoma returned in the form of a tumor in his stomach. The mass was removed surgically and that’s when Dowler decided he needed to connect with an oncologist who specialized in his disease.

“After my second surgery in 2013, it was recommended that I see Dr. Patrick Loehrer because he specializes in thymomas. Since the first time we met, I can tell he loves what he does and that his patients are very important to him,” said Dowler. Loehrer, who is the director of the IU Simon Cancer Center, an IU Distinguished Professor, H.H. Gregg Professor of Oncology, and associate dean for cancer research at IU School of Medicine, is a thymoma expert.

“My prognosis was that I still had cancer because the margins (from my second surgery) were not clear. We knew the cancer was going to come back,” Dowler said.

In October 2016, there was evidence the cancer had returned. That’s when Loehrer recommended a clinical trial for Dowler.

“The trial was based on work done years ago in the laboratory at the IU Simon Cancer Center that demonstrated by blocking a specific molecular pathway thymoma cells died,” Loehrer said. “Unfortunately, no drug was available for human consumption, but we later stumbled upon an agent in early drug development that blocked this STAT3 pathway. This demonstrates the importance of bench to bedside research. Demetrius was enrolled onto the trial, with excellent results.”

“From October to February, I participated in the clinical study,” Dowler explained. “I took standard chemotherapy for thymoma and a pill, which was what was being studied to see if it enhanced the standard treatment. I continued working, but that was a challenge. It was tough because I was fatigued and students would come up and ask me if I was okay. I had no facial hair, no eyebrows, no head hair and I’d lost weight.”

Since that time, all has been good. He undergoes a CT scan every six months and there is no evidence of the cancer returning.

“Dr. Loehrer has a good eye on it,” he said. “I especially would recommend clinical research because you never know if it’s going to be an actual cure for cancer.”

Dowler’s little 8-year-old daughter (Hunter) is now 26, and he and his wife (Holly) were blessed with a second child, a son named Jacoby, age 7. Dowler spent 17 years teaching business math, geometry, algebra and pre-calculus at Ben Davis, then he went to Brownsburg High School, where he now is in his fifth year as an assistant principal.