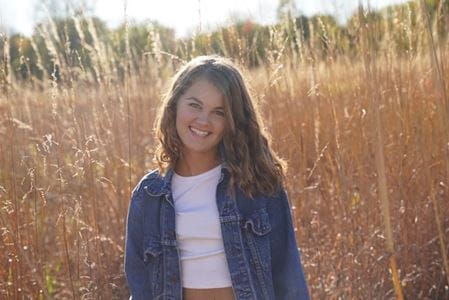 When Tatum Parker was about to turn 6, she woke up in the night with terrible pain in her leg. Her parents took her to the emergency department, but rather than a broken leg or injury, Tatum had a large tumor on her right femur. Her pediatrician immediately recommended Riley Hospital for Children at IU Health. A few days later, Tatum had a biopsy at Riley Hospital, and doctors diagnosed her with Ewing sarcoma.

“It was definitely scary, especially as a young kid,” Tatum remembers. “You don’t know why they’re sticking all these needles in you. You don’t understand why you have to have all these surgeries and lose your hair and be different from everybody.”

A year of chemotherapy and major surgery followed Tatum’s diagnosis. Six inches of her femur was removed and replaced with a steel plate. She spent weeks in the hospital recovering, but a backpack she received when she was first diagnosed kept her entertained.

“It was full to the top with games and toys, and I had a pink Gameboy, which was huge,” she remembers. “I took the bag with me every day I went to the hospital.”

While she was in and out of Riley Hospital, Tatum noticed that there were some kids in the hospital who didn’t have many visitors or enough to play with.

“I would share my things with them,” she says. “After I finished treatment, my family and I wanted to give back somehow. So we started making our own backpacks for every kid diagnosed with cancer at Riley.”

When they started the project in 2008, Tatum had been cancer free for a year and half. At 8 years old, Tatum was again diagnosed with Ewing sarcoma, this time in her right lung. As she went through treatment for the second time, she also visited other kids in the hospital to give them their new backpack.

“I was able to meet so many kids I was giving these bags to, and I got to see the impact I was making,” she remembers. Today, the Tatum Parker Project makes a backpack for every child diagnosed with cancer in Indiana. Tatum and her family fill each one with hundreds of dollars’ worth of games, toys, books, electronics and gift cards.

Tatum has been cancer free for ten years this month. She is currently winding down her last summer before college. Soon she will move to Bloomington to attend Indiana University and study to be a pediatric oncology nurse. 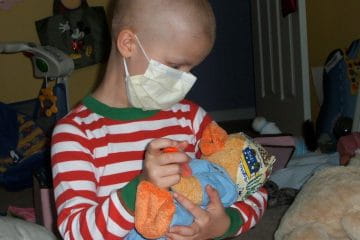 “I want so desperately to work with kids who are going through the same thing,” Tatum says. “I can totally put myself in their shoes. I know how to make them feel better because of the things my favorite nurses did for me. I want to be that person for other people.” She’s kept in touch with some of her nurses from Riley Hospital, who have already volunteered to help her study.

“I know too many people who have passed away from cancers where there wasn’t enough research to know what to do to treat them,” she says. “If there was more money, we could save so many lives.”

Tatum is even planning to participate in research as a cancer survivor. Recently at her survivor clinic she was asked if she’d be interested in joining a study to help understand how cancer treatment can effect people years or even decades later.

Whether it’s through acts of service, fundraising for pediatric cancer research, participating in research or her future as a nurse, for Tatum, it all comes down to giving back. “I told myself, I want to do something where I can help people. As long as you have a profession where you’re doing something to give back to people, it makes everything worth it.”

Alyssa joined the Office of Strategic Communications in 2019 as the digital content manager. She recently moved back to Indiana after 8 years in Utah, where she told stories about research, education and clinical care at Huntsman Cancer Institute and the University of Utah.