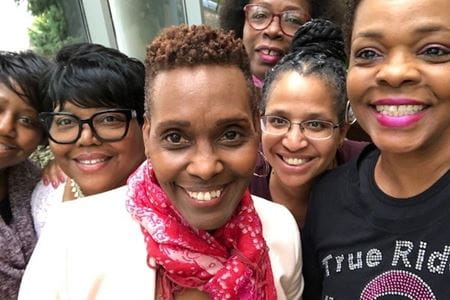 Some friends have questioned why she can’t just have a birthday dinner, but Cheatham, a community advocate with Pink-4-Ever Ending Disparities, wants to help them understand how vital it is for Black women to be involved in breast cancer research.

“I tell them we’re doing this to help our families—the next generation—so if they’re diagnosed, they won’t have to suffer, or maybe there will be a cure. This is our contribution,” she said.

These disparities were once thought to be caused by socioeconomic factors, but medical scientists have discovered genetics are also at play. Researchers at Indiana University School of Medicine are studying how treatments can be tailored for people of different ethnicities to fight breast cancer more effectively and with fewer side effects.

“The outcome in women of African ancestry is far worse than women of European ancestry—even if they have the same cancer type and even if they get the same access to care. My lab is very interested in finding out why,” said Harikrishna Nakshatri, PhD, the Marian J. Morrison Professor of Breast Cancer Research at IU School of Medicine and co-leader of the breast cancer working group at the Vera Bradley Foundation Center for Breast Cancer Research at the IU Simon Comprehensive Cancer Center.

Nakshatri is leading a project to map the breast at the single-cell level as part of the Human Cell Atlas initiative. In the more than 5,000 samples of normal breast tissue that have been donated to the Susan G. Komen Tissue Bank at the IU Simon Comprehensive Cancer Center, differences have been discovered based on the genetic ancestries of donors, Nakshatri noted. 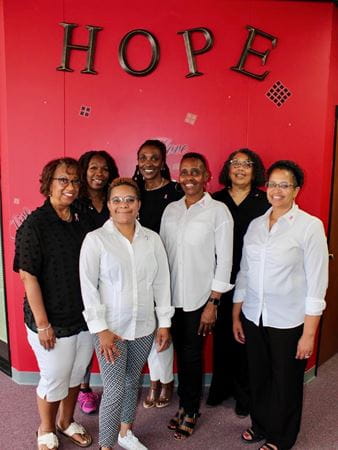 This is why Cheatham and other community advocates are partnering with IU School of Medicine to spread the word about the importance of including Black women in clinical research for breast cancer.

“If you don’t have high enough participation from Black women, we’re kind of left out of the research, and they don’t know how different cancer drugs affect us,” said Lisa Hayes, executive director of Pink-4-Ever Ending Disparities, an Indianapolis organization with the mission to eliminate breast cancer disparities for Black women through advocacy, education, research and empowerment.

In 2007, she and board president Nadia E. Miller were both diagnosed with triple negative breast cancer (TNBC)—an often deadly form of breast cancer that is not responsive to hormone therapies and is resistant to chemotherapy. Only recently have medical scientists discovered that African American women are more likely to carry a gene mutation which makes them at higher risk for developing TNBC—and having it recur.

“The solution to being able to eradicate disparities is to substantially focus our efforts on understanding why there are differences and then attacking the cancer more effectively,” said Bryan Schneider, MD, the Vera Bradley Professor of Oncology at IU School of Medicine. 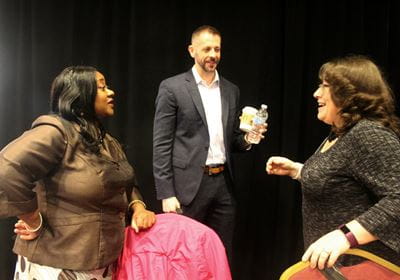 He discovered another issue contributing to the higher mortality rate for Black breast cancer patients. Peripheral neuropathy—a common side effect of some chemotherapy drugs—causes numbness or pain in the hands, feet or limbs and disproportionately affects African American patients.

“We found, because this toxicity is so significant in our Black patient population, that it has resulted in physicians needing to reduce the dose of this curative chemotherapy, and this is one of the reasons Black patients have inferior outcomes for breast cancer—so it’s a very significant side effect to study,” Schneider said.

Saysha Wright was one of the early participants in the trial. A mother of two toddlers, Wright was diagnosed with Stage 2 breast cancer in July 2019. She agreed to participate in the research on neuropathy because, “Why not try to help somebody in the future?”

Wright had an acquaintance whose neuropathy became so severe that she couldn’t walk.

“I knew it could get bad,” Wright said. Thankfully, her own experiences with neuropathy were not severe, but they still impacted her everyday life.

“It was kind of hard to button up stuff and do my daughter’s hair because I lost feeling in my fingertips,” she said. “My hope is that a woman doesn’t have to experience it at all in the future. I really hope they find a cure.”


A ‘renaissance’ in breast cancer discoveries

Back in 2007, Hayes and Miller were not invited to participate in any clinical trials.

“If you look back 10-15 years ago, our advances were sluggish—we were comparing ‘chemotherapy A versus chemotherapy B’ and identifying really incremental and small benefits for a broad population,” Schneider said. “As we’re better able to embrace our own genetic diversity and its impact on the way we tolerate drugs—and how we stimulate our own immune system to attacking the tumor—these major advances in our understanding are moving us into what I think to be a renaissance period of growth in terms of cancer therapy development.”

In 2017, IU School of Medicine launched a TNBC study, led by Schneider, with the goal of discovering blood-based biomarkers to predict which patients were likely to have a recurrence of the disease. It was important to recruit Black patients to participate.

“We had marketing images with Black women in them, but they weren’t performing well on social media,” said Casey Bales, MPH, program manager for the Triple Negative Breast Cancer Precision Health Initiative and Vera Bradley Monogrammed Medicine. “We realized we needed more help.” 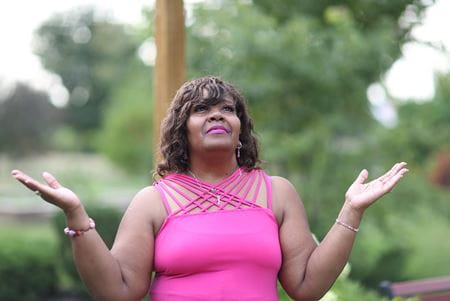 Schneider’s team reached out to Hayes and Miller for advice. They took a look at the existing imagery used in recruitment materials and gave their frank opinions: the pictures looked unwelcoming and “scary.”

“It was an eye-opening experience for our entire group. We sat back and tried to learn from their amazing guidance,” Schneider said.

Hayes and Miller connected the IU team with a local Black photographer, Natasha Cannon, and helped recruit breast cancer survivors to be featured in an image library that conveyed hope and courage and connected with the Black community’s values of faith and family.

As a result of this collaborative effort, 30 percent of the BRE12-158 study participants were Black—a number that is significantly higher than the national average of 5 percent participation from Black patients in clinical trials, Bales noted.

“Our partnership gave us an opportunity to create and brand materials that yielded great results. And we got new friends—it was a true collaboration,” Miller said of the relationship developed with IU School of Medicine.

“The message is about how their participation can really help—how important it is particularly for Black women to donate breast tissue,” Hayes said. “It’s a small sacrifice for something that can have a large impact in the future for their families.”

Now a new Phase 2 clinical trial is launching called PERSEVERE. It aims to enroll 200 participants who are at high risk for a recurrence of TNBC to study the effectiveness of personalized cancer treatment combinations based on patients’ unique genetic data. Participation from Black patients will, again, be vital.

With rapid advances in precision medicine, the medical community is figuring out what treatments work best for which people—and why. Breast cancer research is no longer a sluggish field but an energizing one, Schneider said.

“You’re going to really see massive advances as we begin to learn at a really rapid pace, and our ability to personalize medicine will be markedly better,” he said. “The drugs that are designed to attack these genetic vulnerabilities will be much sharper, much more effective, and have fewer side effects. I think we’re going to improve the cure rates for many patients.”
The views expressed in this content represent the perspective and opinions of the author and may or may not represent the position of Indiana University School of Medicine.