Bone Healing in Space – What’s Next? 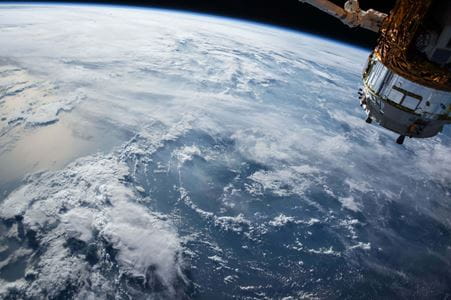 Orthopaedic research is no longer limited to the confinement of a traditional lab setting – it is now a part of a select group of prominent research experiments conducted 250 miles above the Earth’s surface.

Melissa Kacena, PhD, associate professor of orthopaedic surgery at Indiana University School of Medicine, has taken bone-healing research to the outer limits and aboard the International Space Station (ISS). In partnership with NASA and the United States Department of Defense (DOD), Dr. Kacena and her team of researchers are working tirelessly to translate new discoveries in bone regeneration for osteoporosis, fracture healing and other bone disorders through the Rodent Research-IV mission.

On Feb. 19, 2017, Rodent Research-IV successfully launched on the SpaceX CRS 10 spacecraft from the Kennedy Space Center in Florida. After arrival to the ISS, the astronauts then took over the care of the mice and completed studies to determine the effectiveness of a new drug, developed by Dr. Kacena, designed to enhance bone regeneration.

On Earth, bone formation typically occurs without any sort of stimulation due thanks, in large part, to gravity. Bone cells called osteoclasts are continuously breaking down the bone tissue in skeletal systems as a second group of bone cells, osteoblasts, simultaneously work to create new bone. On average, individuals “grow” a new skeleton every seven years, helping us to endure the conventional forces of Earth.

“An astronaut’s body thinks it no longer needs a strong support structure because they are not bearing weight during spaceflight,” said Dr. Kacena. “Essentially, their bodies begin to rid themselves of bone without signaling osteoblasts to create more.”

While the way bone cells respond in the two separate environments couldn’t be more different, some similarities exist. Indeed, the weightlessness of spaceflight mimics the lack of weight bearing that would occur when a doctor prescribes crutches or bedrest. This would typically be prescribed to those with severely injured limbs due to a car accident or soldiers sustaining blast injuries. This connects the dots for the importance that the efficacy of the new drug be tested in the weightlessness of space, especially in light of the fact that unlike humans, animals bear weight on their surgical limb immediately after they recover from anesthetic.

Previous lab tests indicate that Dr. Kacena’s new drug therapy has the potential to enhance bone growth, regardless of environment. It is now time for Dr. Kacena to further prove these findings.

On March 27, Dr. Kacena and her research team, as well as researchers with the U.S. Army, received the experimental specimens to begin analyzing the data collected through the research conducted aboard the ISS. This analysis includes the dissection of bone tissues, beginning with the most important and sensitive tissues, and moving forward. It is estimated that the data analysis phase of Rodent Research-IV will take approximately one year to complete.

“I am hopeful that once we are through with this analysis, we will have strong evidence to support the effectiveness of this new drug,” she says. “It’ll be an exciting new therapy that can be used both here on Earth and in space, benefitting diverse population groups.”

In addition to the intense data analysis for Rodent Research-IV, another hurdle for Kacena and her team is funding for the continuation of this research. If you would like to be a part of the longevity of this mission through the contribution of a gift, please contact Elizabeth Elkas, associate dean for development at IU School of Medicine, at 314-274-5262 or eelkas@iu.edu.