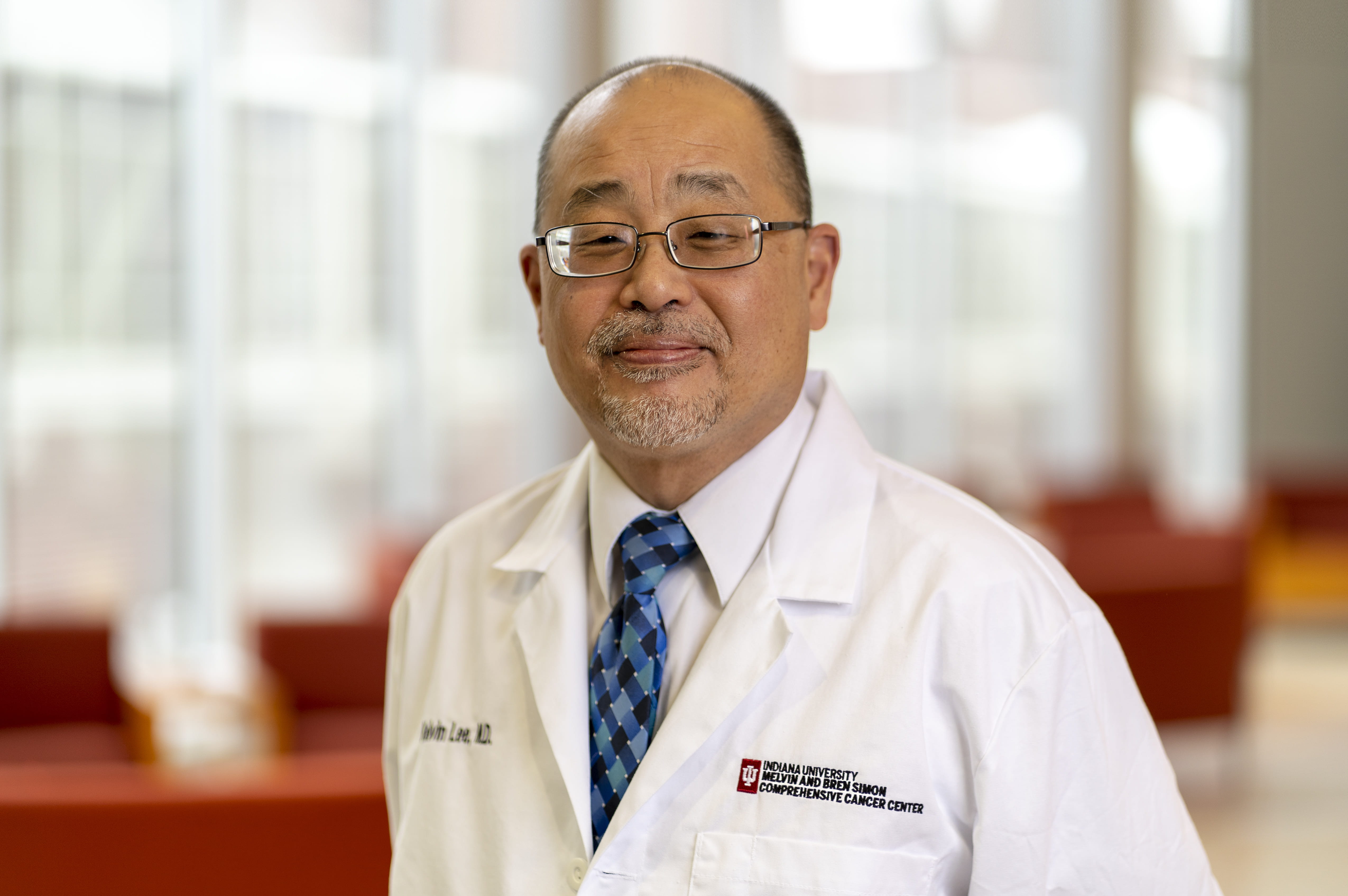 FOR YEARS, beating cancer could be described as one size fits all. Not anymore. Increasingly, we understand that every patient is unique–from the genetic gears giving rise to their disease to the therapies that halt it.

We also know that methods we use to cure the disease can come with a lingering toll.

At the Indiana University Melvin and Bren Simon Comprehensive Cancer Center, 276 researchers study a wide variety of cancers at every stage along the way: prevention, diagnoses, treatment and survivorship. Some work in laboratories, focusing on disease at the cellular level. Others carry out clinical trials that translate those findings into better treatments.

Your steady support empowers the groundbreaking work unfolding each day at Indiana University School of Medicine. Here’s a glimpse at the progress we’re making—together.

Ending breast cancer requires understanding the disease–from its origins to its final fragments. Researchers at our Vera Bradley Foundation Center for Breast Cancer Research have the depth and diversity of expertise to make this possible.

Using sophisticated technology, Hari Nakshatri, PhD, pinpointed cell types that give rise to most breast cancers. With those insights, we can focus on disrupting the disease early on and come up with focused treatments.

Sometimes, a single gene plays an outsized role. Jaeyeon Kim, PhD, and Olga Kim, PhD, identified a mutation in the BRCA1 gene that can influence whether a woman develops breast cancer. They also found that blocking a hormone might stop the onset of triple-negative disease.

Tarah Ballinger, MD, is doing just that. She oversees a study where women take an antiprogesterone drug before and after a mastectomy. Their tissue samples are compared to see whether it’s effective in altering cancer’s path.

It’s just one way IU scientists try to thwart triple-negative breast cancer—creativity needed against a form of the disease that’s most difficult to treat. For example, Nakshatri uncovered a genetic factor that helps those cancer cells become immortal. It’s currently the basis of a clinical trial.

Meanwhile, Kathy Miller, MD, oversees multiple large-scale studies in search of solutions. In one national trial, a drug aims for a target on the surface of triple-negative breast cancer cells and delivers chemotherapy right to the disease. In another, patients will receive a pair of drugs—one pointed at a genetic driver and another at a gene that helps cancer survive.

He’s using that insight while he leads a large-scale study focusing on women at greatest risk. Those taking part receive therapy matching their tumors’ DNA profile—a tailored approach to keep cancer at bay.

For our clinical scientists, tackling lung cancer means taking on tough questions. For example, when should a patient get immunotherapy? When does it improve outcomes? How long should they receive it? And can we trim that time?

Their work aspires to use immunotherapy effectively but spares patients from unnecessary side effects. Using a combination of drugs, Greg Durm, MD, pared the treatment time down to six months, and results showed it was more effective than a single drug over a longer period. Meanwhile, Nikhil Shukla, MD, reported that combining immunotherapy and chemo maintains control of the disease.

Durm is also leading multiple studies exploring immunotherapy as a tool to treat early-stage disease. One study taking place through the Big Ten Cancer Research Consortium will give a group of patients the drug Keytruda, while the other undergoes standard observation after surgery.

Like their colleagues studying breast cancer, those in lung cancer also utilize circulating tumor DNA as a tool. In collaboration with Stanford University, our clinicians measure how long these faint traces persist in the blood. When they’re gone, it could mean it’s time to end treatment.

IU’s work also goes beyond therapy. Our scientists are focused on the well-being of patients before and after they undergo treatment. Shobha Shahani, MD, is studying whether immunotherapy slowly causes microvascular changes in the brain that affect thinking memory and concentration.

It’s also essential patients keep up a healthy lifestyle. Plenty of sleep, a nutritious diet, regular exercise, and a loving support system are crucial. Knowing whether that happens, however, is complex. Laura Vater, MD, is developing a tool to gauge whether that’s occurring. Ideally, a patient would only need to answer yes or no questions. She is testing whether the assessment prompts a change in habits.

Thanks to IU’s development of a pioneering chemotherapy regimen, testis cancer is no longer the death sentence it was 40 years ago. Though the cure rate is now almost 95 percent, Larry Einhorn, MD, and his colleagues are not satisfied.

They remain concerned about the long-term side effects that often follow treatments that cure the cancer. While the pairing of cisplatin and two other drugs most often eradicates the disease, it can also cause long-term ringing in the ears or painful numbness in limbs. For some men, the effects are modest. Reducing these effects is a key focus.

There’s also a need for treatments for the men whose cancer returns—and for a biomarker that could help us find the tiniest traces of the disease. All of it amounts to better care for 8,000 men across the United States diagnosed each year with testicular cancer, many of whom make their way to IU School of Medicine.

Lois Travis, MD, SCD, an international expert in survivorship, oversees The Platinum Study, a global consortium trying to understand cisplatin’s toll. The group is looking for factors that might predict whether a patient will face long-term issues. With those insights, oncologists might know who is at risk.

And while 80 percent of men with metastatic disease are cured, some see their cancer relapse. In addition, studies show that the standard treatment only works 60 percent of the time. Nabil Adra, MD, is hunting for a better way.

He’s conducting a clinical trial comparing the long-standing approach with high-dose chemotherapy followed by a chemo drug in pill form as maintenance. The goal: see whether maintenance therapy improves the cure rate.

Even then, there is still a group of men whose disease persists in the face of intense therapy. So, IU researchers conducted genetic testing and found many overexpress a protein that drives their cancer. They also looked for a way to block it.

Adra launched a clinical trial for a drug he hopes will do just that. Unlike chemo, it’s also a targeted therapy, which should spare patients from the draining physical toll.

The survival rate for pancreatic cancer has improved–but only modestly. The fact remains just 10 percent of patients are alive five years after their diagnoses. The solution is accelerating research that can save lives. Today, IU is ready to lead that push.

Over the past three years, 20 faculty members have come together in a working group that strives to do more than shrink tumors. Its members focus on the whole patient.

It starts with understanding how tumors form, slowly hijacking the organ as they grow. Melissa Fishel, PhD, and her team are poised to reveal those mechanics using a 3-D model that produces microtumors and allows scientists to study the environment inside. That nuance matters in the search for therapies.

Those tumors also develop a dense fibrotic layer that serves as a protective shell, making it hard for drugs to reach cells. Yet Janaiah Kota, PhD, and Evan Fogel, PhD, may have found a way through.

A molecule prevents that tissue build-up–one absent from the disease. This year, the researchers demonstrated it could work in animals, and the next step is to find a way to deliver it to the pancreas in humans.

Pancreatic cancer is wily in another way, too. Chemotherapy puts tumors under stress by cutting off oxygen. When this happens, a protein inside cancer cells flips on, activating genes to help it survive.

Fishel and Mark Kelly, PhD, are hunting for compounds to block this process. So far, they’ve found 13 options and will select three or four for advanced analysis. Fishel is also working with Teresa Zimmers, PhD, and Millie Georgiadis, PhD, to find other inhibitors.

And for many patients, it’s not cancer that takes their life. Instead, the rapid loss of muscle and fat tissue—cachexia—is the fatal culprit. At IU, Zimmers leads a team focused on the condition, and they’ve found that a protein is overactivated, leading to fat wasting. When that process occurs, lipids get released and travel to muscle and cause it to break down. Currently, Zimmers is working with Leonidas Koniaris, MD, Yunlong Liu, PhD, and Sha Cao, PhD, to study how they can halt this chain of events.

A Word of Thanks

Scientists at the IU Melvin and Bren Simon Comprehensive Cancer Center are engaged in research that saves lives, reduces suffering, and improves a patient’s long-term quality of life. Your support is vital to making that possible.

Help IU School of Medicine bring us closer to a cure for cancer.