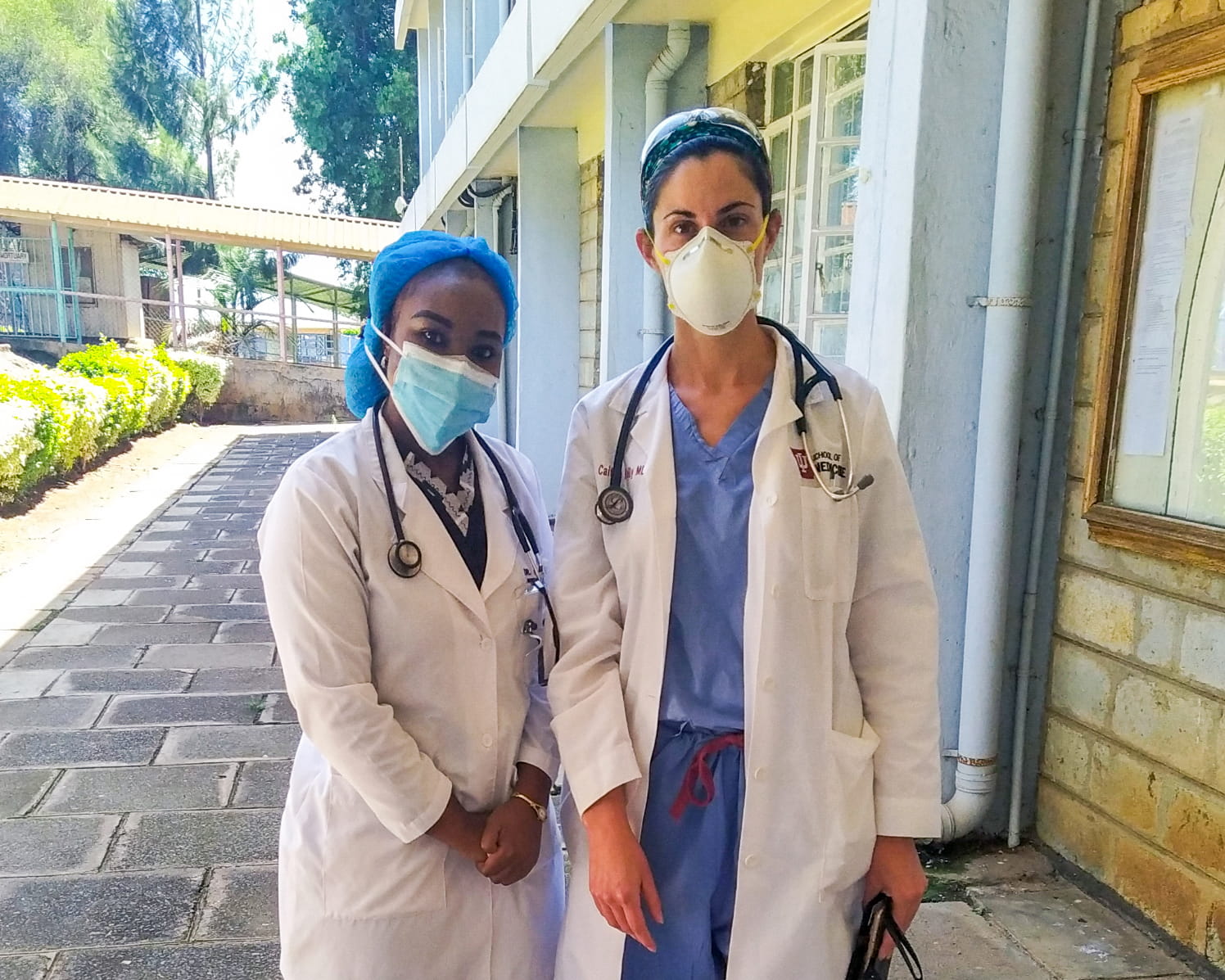 WHEN COVID-19 forced a worldwide travel alert last March, AMPATH’s North American personnel in Kenya, including those from Indiana, were recalled back to the U.S., but they launched a determined remote working experiment. The task was critical: use the lessons learned and relationships forged fighting the HIV epidemic to help a country’s health system withstand the current pandemic.

For much of the last year, Indiana University School of Medicine personnel have been working tirelessly to support their colleagues from afar—in Zoom meetings, in WhatsApp threads, and e-mail exchanges. They helped repurpose labs for testing and tracked down protective equipment. They provided guidance to Moi University and Moi Teaching and Referral Hospital, IU’s longtime partners in Kenya, as they increased ICU space, rearranged wards to create space for isolation of infected individuals and brought trainees back to campus.

The swiftly unfolding threat created uncertainty. Kenya has seen more than 168,000 confirmed cases, with at least 3,000 COVID deaths. In reality, the numbers are likely much higher.

Yet the AMPATH partnership spent three decades building up the health system in western Kenya. And your support of IU’s work helped prepare and equip it for the challenge of a new pandemic.

Since 1992, AMPATH partners have worked together in Kenya to tackle the HIV epidemic and take steps to address factors influencing health—food security, poverty and social determinants. IU faculty helped create residency programs and train the physicians who now lead this durable health system. Over time, the work stockpiled reserves of an essential asset in a crisis: trust.

“The personal relationships that have been developed lend themselves to this kind of consultation,” said Adrian Gardner, MD, MPH, executive director of the AMPATH Consortium and director of the Indiana University Center for Global Health. “That doesn’t just happen. You don’t call up a random stranger and say, ‘How are you doing over there?’ It needs to be someone you trust.”

Compared to the rest of the world, the coronavirus was late arriving in Kenya. The lag allowed government and health officials time to take crucial steps. Early on, they limited travel and put public health measures in place.

Stopping the spread was always going to be difficult in Kenya. Living quarters can be small and crowded. In many parts of Kenya, access to clean water, even for handwashing, is limited. In large cities, a morning commute to work entails crowding into a packed mini-bus.

Confirming cases and encouraging isolation and quarantine were pivotal. It was where several decades of investment gave AMPATH the infrastructure to make it happen. The country prepared to get a testing program off the ground.

During the earlier HIV crisis, the U.S. government funded the creation of eight regional HIV laboratories which were quickly retooled for the COVID testing program. The lab platform for performing PCR testing for HIV can be utilized for coronavirus PCR testing with the appropriate reagents. When the labs were ready, AMPATH tapped into philanthropic funds to purchase some of the needed supplies.

“Lab capacity and testing,” Gardner said, “are actually success stories—though the capacity was never enough to test everyone.”

Assessing the level of community spread proved difficult. There were only enough reagents to test symptomatic patients, meaning 40 percent to 50 percent of cases have never been identified. “You wonder how much death we’re missing,” Gardner added. “It’s hard to know.”

Treating patients who show up at Moi Teaching and Referral Hospital is also tricky.

Like most hospitals in Kenya, it lacks private rooms, much less enough dedicated critical care units. Infection control can be problematic. Necessities, such as oxygen, are in short supply. AMPATH’s center for adolescent HIV patients underwent a rapid conversion, including adding piping for oxygen. Going forward, it will likely remain an ICU.

When there was a shortage of personal protective equipment, the IU Center for Global Health helped its Kenyan colleagues find adequate sources.

And as the pandemic unfolded, physicians didn’t have access to therapeutic drugs, such as remdesivir, to treat the most critically ill patients. In some instances, they didn’t have enough medications essential for patients who develop blood clots that can travel to the lungs.

Then there were the physicians themselves. When some fell ill, private medical insurers in Kenya invoked clauses that excluded COVID from coverage. Their colleagues and students, under stress themselves, worked to cover the medical bills through crowdfunding.

“My IU colleagues and I feel very connected there,” Gardner said. “Those are our friends and colleagues, and to see them suffering is hard.”

North American-based faculty convened a dozen virtual lectures in recent months on topics suggested by Kenyan colleagues—on protocols for using ventilators, care for pregnant women with COVID, and managing treatment for the critically ill. Even without all the supplies on hand, Kenyan staff members wanted the latest CDC guidance and local treatment protocols for therapeutics and care.

AMPATH’s experience with HIV remains instructive. Today, it still supports more than 170,000 people living with the disease, using a community-based approach. This experience informed the response to COVID.

A Kenyan physician who created the original model tweaked it to help the hospital fashion a home-based COVID care program. AMPATH supporters enabled the IU Center for Global Health to send 100 pulse oximeters that were distributed to patients in home-based care. Health care workers also offered advice and guidance on proper quarantining.

AMPATH is also responding to the pandemic’s indirect impacts—delays in tuberculosis treatment, a halt in the distribution of bed nets, and canceled cancer screenings. Then there are the devastating socioeconomic consequences. Roughly 60 percent of Kenyans face food insecurity. That means buying food—and paying rent—have been a higher priority than paying off microloans. That put hyperlocal lending groups organized by AMPATH in jeopardy.

To help individuals pay loans and ease the strain, AMPATH made cash transfers. Similar transfers were also made to some of the most vulnerable people living with HIV, who are at particular risk during an economic downturn.

By October 2020, IU faculty started to return to their Kenyan homes and short-term visitors and limited medical resident rotations are in the works.

Vaccines will help change the situation on the ground. Kenyan health officials began a nationwide rollout of the AstraZeneca vaccine in early March and healthcare workers were among the first in line.

With a catchment area of 20 million people, Moi Teaching and Referral Hospital is among the centers tasked with delivering and administering vaccines. “If we’re asked, there’s an opportunity for AMPATH to use our network and our brand to deliver the vaccine and messaging around vaccine hesitancy,” Gardner said.

As in the past, IU aims to provide support while Kenyans take the lead.

Make a gift to empower AMPATH’s mission in Kenya.