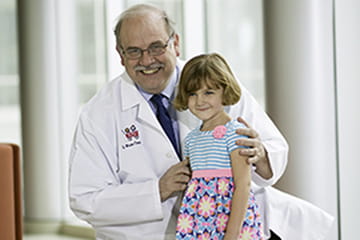 As a college student, Wade Clapp, MD worked at a summer camp for children with ADHD, autism and other conditions often associated with academic struggles. “We did a lot of kids a lot of good at that program,” he said. “Kids would go back and improve in school.”

That ability to help change the trajectory of a child’s life sparked his interest in medicine—specifically pediatrics. Today, Clapp is the chairman of the Department of Pediatrics at IU School of Medicine, physician-in-chief at Riley Hospital for Children at IU Health, and a nationally recognized researcher focused on NF1, a common and often devastating genetic disorder.

Clapp holds the Richard L. Schreiner Chair in Pediatrics. Funding from that endowment and others is vital because it allows him to recruit faculty and support innovators who are asking new scientific questions. Under his leadership, the department has grown into a research powerhouse, and it trains roughly 165 future pediatricians each year through its highly respected residency and fellowship programs.

In his role at IU School of Medicine, Clapp is influencing the lives of children throughout Indiana, but his basic goals remain similar to those he held as a camp counselor decades ago: “We want to empower children to be prepared for a life of success and good health.”