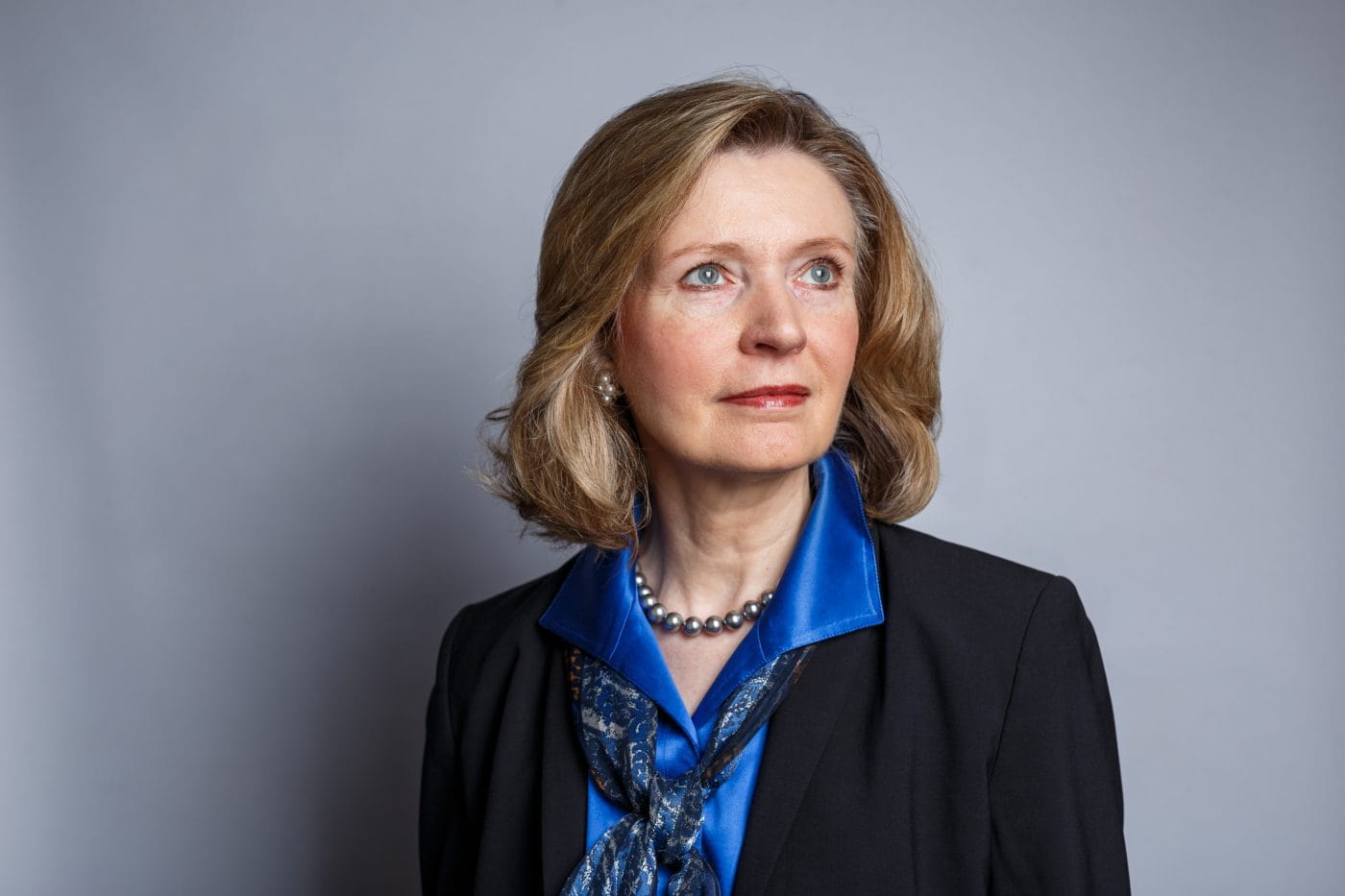 THE PAIN pulsing in James Mikesh’s lower back was so bad it shook him from his sleep.

When it hit, Mikesh—then a senior at the University of Minnesota—would trudge into his bathroom, turn on the knobs in his bathtub and slip into warm water, searching for relief. For a while, that was enough. Then the pain spread to his groin, and Mikesh sought help.

It took little time for an oncologist to diagnose the problem: Testicular cancer, stage 3.

At 22, Mikesh had little grasp of what he faced. Before ever consulting his parents, he consented to surgery and got scheduled for chemotherapy. When he shared his secret over Easter break, his parents were flabbergasted. “I can’t repeat what they said,” Mikesh said. “They weren’t happy.”

Their frantic calls to cancer specialists around the country led to Craig Nichols, MD, the physician who initially treated cyclist Lance Armstrong. Nichols gave Mikesh and his family some advice thousands of other men have heard: Go see Dr. Larry Einhorn at Indiana University School of Medicine.

“We were on a plane to Indianapolis on Easter Sunday,” James said.

NEARLY TWO decades later, Mikesh, 42, lives a full life. He’s married and has two children. Because of a revolutionary therapy developed by Einhorn and his colleagues at IU School of Medicine, Mikesh is part of a legion of survivors of a disease that once killed 95 percent of patients. Now, 95 percent of patients are cured.

Yet, like many patients whose lives were spared, the combination of cisplatin and two other drugs that were part of his therapy left Mikesh with lingering side effects. His ears ring constantly. His left leg has nerve damage that means it can’t produce sweat.

For Mikesh and other survivors, the symptoms rarely disrupt a day. These men still build careers. They still have the capacity for sexual intimacy. They still play with their children. 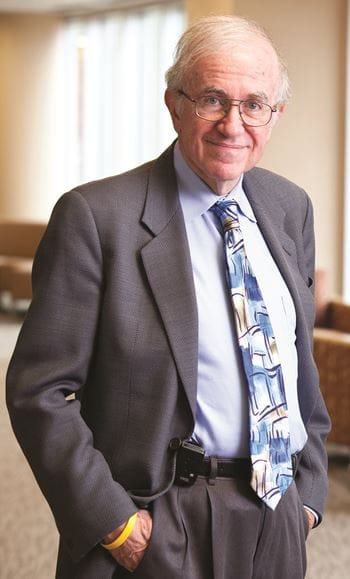 Tinnitus, hearing loss and neuropathy have almost become the price of a cure—the cost of admission to the fraternity of survivors. “What’s the other tradeoff?” James asks.

Cisplatin therapy is sometimes referred to as a “marvel.” The American Society of Clinical Oncologists rates it among its top five cancer research breakthroughs. But Einhorn is still not content. He thinks the side-effect tradeoff is unacceptable. Left to Einhorn, a phrase sometimes used to describe life after surviving cancer—the “new normal”—would be stricken from the medical lexicon.

To that end, Einhorn launched the Cancer Survivorship Research Program in 2014. One of its aims is to reduce the toxic side effects from the treatment Einhorn pioneered.

For all his intellect, Einhorn knew the task required a skill set he did not possess—the ability to analyze a patient’s genetic risk for side effects and minimize it with clinical care. What he needed was a researcher capable of melding diverse fields into this emerging area of survivorship. Fortunately, Einhorn had just the right person in mind.


LOIS TRAVIS, MD, has spent her career studying cancer survivors and organizing investigations that brought together scientists from across disciplines and from around the world. Her broad-based background in medicine, pathology and epidemiology was unique.

In the 1980s, Travis was looking to earn her doctorate in epidemiology at Harvard University’s School of Public Health. She proposed exploring whether patients with non-Hodgkin lymphoma—treated at the National Institutes of Health where she worked—were at risk for a second cancer later in life. Her committee wanted her to think bigger. Soon, she began an international study.

It was largely untilled scientific ground.

By the early 1990s, other scientists were beginning to ask if platinum, the key ingredient in cisplatin, was a carcinogen. In international studies, Travis began tracking data on ovarian and testicular cancer survivors treated with the drug—and later diagnosed with leukemia. Over the next decade, Travis and her colleagues published a pair of landmark studies. By 2000, they could report that, yes, cisplatin was a human carcinogen.

Patients will live, she realized, but their cure comes at a cost.

TRAVIS AND Einhorn first met in 2009. Travis was organizing an international study of adult-onset cancer survivors, utilizing translational genomics. By studying genes, she reasoned, it might be possible to discover the genetic alterations or mechanisms that lead to hearing loss, nerve damage and other side effects. In convening the initial workshop, in Rochester, New York, Travis centered it around Einhorn. She invited a range of people from experts in trace metals to cardiologists.

It led to an alliance of scientists, now known as The Platinum Study, working to reduce side effects. For their work, researchers needed a disease where most patients were cured, lived many years after treatment and were otherwise healthy. Testicular cancer—with men who are cured young—fit the bill.

At their first meeting, Einhorn lectured to a packed room. When he concluded, he met scientists from around the world. But the one he was most interested in getting a better sense of was Lois Travis. He knew she could fill a niche at IU School of Medicine. “We didn’t have anyone of her skill and ability here who did the type of work she was doing,” he said. Follow-up meetings underscored why Travis was a tailored fit.

IU wasn’t alone in pursuing Travis, yet she was drawn here by the resources and critical infrastructure, including the biobank. But that wasn’t the biggest pull. “I wanted to work more closely with Dr. Einhorn,” she said. “He really cares about his patients. He tries to help and mentor everyone around him. He really is just a remarkable human being.” She also realized that, when it came to the use of platinum in medicine, Einhorn knew everything there was to know.

So, in 2015, Travis came to IU and took over the survivorship research program Einhorn established. Today, they work in adjacent offices on the fourth floor of the IU Simon Cancer Center.

Travis continues to mastermind The Platinum Study group, which enrolls patients from several of the top cancer centers in the United States and the United Kingdom and that has forged alliances with investigators at several leading universities. Since her arrival at IU, the group has also produced a steady stream of important discoveries, including that:

The studies continue. Better understanding of the processes—and who might be at greater risk for aftereffects—is vital. The group has collected and banked scores of blood samples for each patient.  Oncologists won’t stop using cisplatin, the only proven cure for testicular cancer, but Einhorn said it could be possible to determine which patients are more adversely affected by it—and take steps, such as adjusting dosages or duration of treatment, to mitigate damage.

PLENTY OF work remains. The Platinum Study was the first to perform extensive hearing tests on a large number of adult-onset survivors. The next step is to repeat it, measuring whether survivors lose their hearing more rapidly than the rest of the population as they age and what other factors might affect the trajectory. Travis will be studying testicular cancer survivors—whose median age is 37—for the rest of their lives.

Many of the men have given time and blood, literally, to take part in the study—acts that Travis says demand a similar commitment from her and her colleagues.

“You’re beholden to those patients,” she said. “You follow them for the rest of their lives and do what you can to help them.”

As Einhorn pioneered the cure, Travis is seeking to minimize the tradeoffs for surviving testicular cancer—to create a better “new normal.”

“I’m completely committed to the study of cancer survivors, including this unique group of patients,” Travis said. “What we learn will help millions of patients around the world.”