Rafat Abonour, MD, and his IU School of Medicine colleagues can see the day coming when there’s a cure for multiple myeloma, a cancer of the blood that originates in bone marrow. Where patients once had a grim prognosis, many now live with the disease for decades. New treatments are coming. Abonour, and IU, lead the charge.

But to understand what drives Abonour’s search for a cure, it helps to understand how Abonour responds when he loses a patient to the disease.

A few years back, when one of his patients died, Abonour drove 100 miles to deliver a graveside eulogy. He wrote it by hand. Five pages. He said the man should have a front-row seat in heaven.

More recently, Abonour spent several hours over two days at the bedside of another longtime patient near death. He swapped stories with the family—ones that make you laugh, others that make you cry. There was also a moment when Abonour leaned in and told his patient—his friend—how much he admired him, and how much he loved him.

Myeloma tends to strike people over 60—folks who have done some living and have a deep well of experiences. Because research is already extending lives—with Abonour’s help—he has years to hear their stories and to understand the dreams they have left.

"They never stop wanting to do the next thing—to go on vacation, to go see a grandson,” he said. “Life is about that journey. And when you see somebody who has been able to accomplish that, it’s just an amazing reward.”

And then there is the unusual ritual Abonour performs each year that binds him further to his patients—a bicycle ride of 150 miles or so that’s, ostensibly, a fundraiser. To Abonour, it’s more. In that graveside eulogy, he described it as “a long journey of suffering and companionship.” 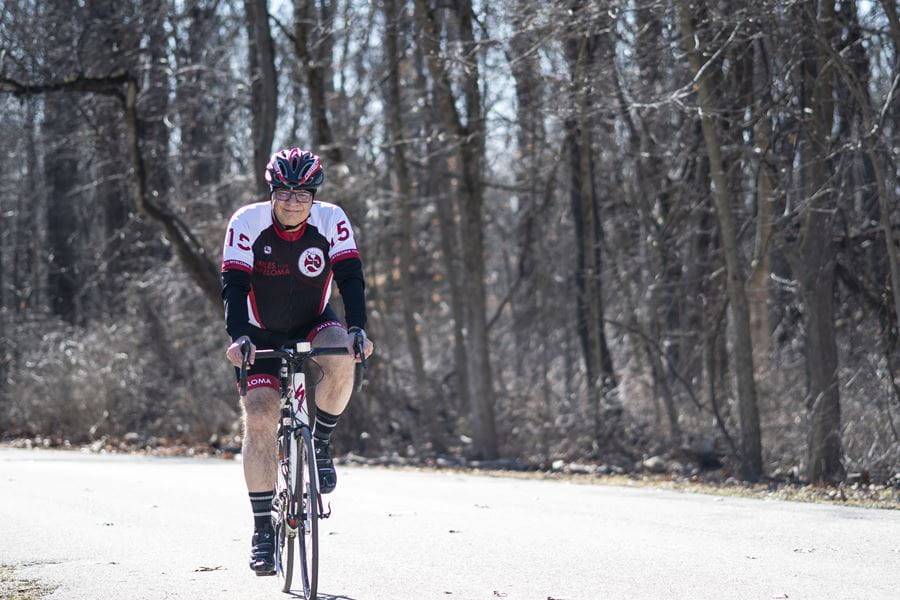 The more Abonour gets to know his patients, the more he loathes myeloma.

Even today, patients break bones or suffer kidney damage before multiple myeloma gets diagnosed. And while some go into long-term remission—a functional cure, he calls it—others suddenly relapse and begin a steep decline. “I just hate this disease. It is a horrible disease,” Abonour said. “I know that everybody will eventually pass away—I’m not going to change destiny. But I want them to live the life that they dreamt of.”

Today, Abonour, the Harry and Edith Gladstein Professor of Cancer Research, and his colleagues at the Indiana University Melvin and Bren Simon Cancer Center are currently treating more than 1,000 myeloma patients. The center was the first in Indiana, and one of the few in the country, to introduce CAR T-cell therapy, a new form of immunotherapy, to multiple myeloma patients. And IU is advancing research on several fronts. And Abonour has helped standardize the practice of multiple myeloma care.

Back in 2005, grant funding for multiple myeloma research was scarce. Abonour knew philanthropy—with its ability to fund new ideas and produce data that can prompt grants—was crucial to his cause.  So, he began talking with his patients about how to generate more money for myeloma research. His patients were coming to see him from all over Indiana.

So, he reasoned, why shouldn’t he go see them? With the patient he would later eulogize at the graveside, Abonour began a cycling event known as Miles for Myeloma. Since its inception, Abonour and friends have covered more than 2,600 miles on their bikes and raised more than $6 million.

For Abonour, no distance is too far to go for his patients.