The laboratory led by Yan Xu, PhD primarily focuses on understanding the mechanisms responsible for the development of ovarian cancer at the molecular level. The lab has pioneered research in the role of lipid signaling molecules in ovarian cancer and has identified the first lipid growth factor in ovarian cancer cells. The team has shown that lysophosphatidic acid (LPA) stimulates cell adhesion, proliferation, migration, and invasion of epithelial ovarian cancer (EOC) cells in vitro and tumor metastasis in vivo. In-depth signaling and mechanistic studies have been conducted and are ongoing. Both immune-competent (for mouse cells) and -compromised (for human cells) EOC mouse models have been routinely used in these studies.

View a complete list of published work by the Xu Laboratory.

The lab is focused on two very critical areas of cancer research: tumor metastasis and tumor-stroma interaction/tumor microenvironment. More recently, through genetic, cell biological and biochemical analyses, the team has obtained first line evidence that ZIP4 has both metal-transporter functions and non-transporter functions. Through genetic, cell biological and biochemical analyses, the lab identified several ZIP4-related regulatory and functional processes not previously known to involve ZIP4. Specifically, the team has shown that ZIP4, along with SOX9, was upregulated by LPA via PPAR? in epithelial ovarian cancer cells.

ZIP4 is required for LPA-induced upregulation of the EOC side population cells, which are an enriched source of cancer stem cells (CSC) and progenitor cells. Using CRISPR-mediated knockout (KO) cell lines for ZIP4, SOX9, and PPAR?, the lab has shown that ZIP4 is functionally involved in CSC-related cellular activities including proliferation, anoikis-resistance, colony-formation, spheroid-formation, drug-resistance, and the EOC side population (SP) in human high-grade serous ovarian cancer (HGSOC) cells. Three new findings were particularly noteworthy. 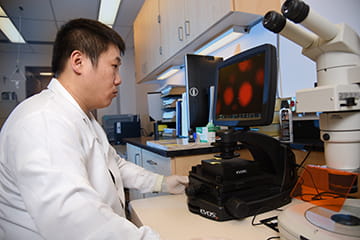 The Xu Laboratory’s early and seminal contributions to the cancer field were the discovery that a small lipid factor lysophosphatidic acid (LPA) is functionally involved in epithelial ovarian cancer (EOC). We have pioneered research in the role of lipid-signaling molecules in ovarian and other cancers and identified the first lipid growth factor in EOC ascites. We have shown that LPA stimulates proliferation of EOC cells, and are among the first group of investigators to show LPA’s activity in cell migration and invasion of EOC cells in vitro and tumor metastasis in vivo. Lipids had been mainly considered as cell membrane building blocks. The important cell signaling roles of lysophospholipids, including LPA, have only been significantly recognized in recent decades. However, prior to the lab’s work (published in 1995), the roles and signaling pathways of LPA were mainly studied in model systems, such as NIH3T3 cells. To date, more than 1000 papers have been published on LPA’s roles and/or signaling in various cancers and LPA has been considered as an oncolipid in EOC and other cancers. 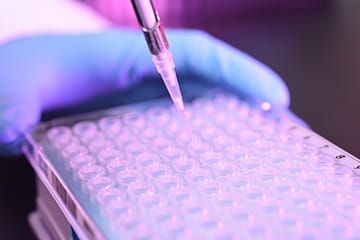 The lab was the first to demonstrate that LPA is a potential marker for the early detection of ovarian cancer and lysophosphatidylcholine (LPC) is a useful marker for colorectal and other cancers. EOC is the most deadly gynecologic disease, mainly due to the lack of highly sensitive and specific methods for early detection and effective treatments for late-stage and recurrent diseases.

In addition, the lab has demonstrated that the enzymatic activities of several phospholipase A2s, critical enzymes regulating the levels of LPC and LPA, are markers for colorectal cancer (CRC), lung, bladder, and pancreatic cancers. The development of early detection markers for EOC and other cancers has the potential to save many lives. Our findings have been confirmed by independent and blinded studies internationally. The group has also developed highly effective electrospray ionization mass spectrometry (ESI-MS)-based lipid analysis and simplified lipid extraction methods to analyze lysophospholipid levels in biological fluids (such as blood, ascites, peritoneal washings, urine, cells, and cell supernatants). These methods are highly sensitive, quantitative and reproducible.

The lab has significantly contributed to the lipidomic field and has published many individual and collaborative papers using this cutting-edge technology. More than 10 papers published around the world have confirmed that blood LPA is a marker for EOC, including PMID: 19051824 and two very recent papers published: a large-scale study including 980 OC patients, 872 benign controls and 668 healthy controls (PMID26174150), and a comparative study showing that LPA shows greater value in the diagnosis of ovarian cancer compared to CA-125 and may be employed as a biological index to diagnose ovarian cancer (PMID:26148603). 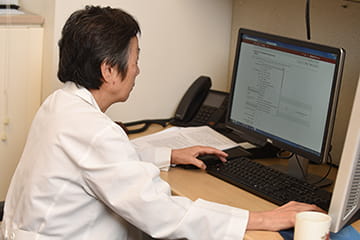 The lab has identified several novel signaling pathways, mechanisms, and targets of bioactive lipids in EOC and other cancers. These lipids include LPA, sphingosine-1-phosphate (S1P), LPC, and sphinosylphosphorylchoine (SPC). 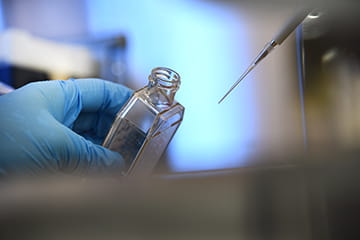 The lab has also contributed significantly to tumor metastasis and the tumor microenvironment field, including testing the gene functions in both tumor and host cells and demonstrating co-targeting efficacies both in vitro and in vivo. 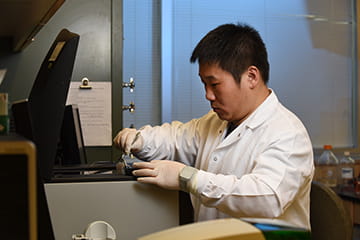 Recently, the lab has been focusing on delineating the genes involved in cancer aggressiveness, drug-resistance, and CSC. Identification of driver genes/proteins in EOC tumorigenic processes is critical to increasing the cure rate for EOC, which has not been improved for several decades. While the TCAG data generated from large-scale integrated genomic analyses have set the genetic landscape of EOC, the driver genes, functional players, and critical regulators for each step of EOC development are still largely unknown and need to be functionally determined. In addition, although many in vitro studies have been conducted to identify functional genes involved in EOC, in vivo approaches are more clinically relevant, due to the pivotal contributions of the host system (tumor microenvironment).

With these rationales in mind, the lab has developed a highly aggressive EOC cell line (ID8-P1 or P1) from ID8-P0 (without in vivo passage, or P0) through in vivo passage in C57BL6 mice. ID8 syngeneic mouse EOC line was obtained through spontaneous transformation of normal ovarian surface epithelial cells from C57BL6 mice by repetitive passage in vitro. The time to tumor/ascites formation and mouse morbidity was reduced from ~90 days for ID8-P0 cells to ~ 30 days in P1 cells. The lab has shown that the human EOC cell line shares functional and signaling similarities to those in the ID8-P0 and –P1 pair (refs. see below). In addition, the group has generated a pair of in vivo-passaged human EOC cells from the serous EOC cell line Caov3, which share many similarities to the ID8-P0 and –P1 pair (unpublished data).

The lab has taken advantage of the development of high-throughput sequencing technologies and innovative bioinformatics analyses in recent years to obtain more complete and systematic data on mRNA expression changes, splicing pattern changes, and alteration in non-coding RNAs in the pair of ID8-P0 and -P1 cells (to be published elsewhere). The duplicates displayed highly consistent results. The lab has confirmed the results using RT-qPCR, Western blot analyses, and/or ELISA assays in ID8 and human EOC cells for more than 40 genes identified to be up-regulated in P1 vs. P0 cells in the RNAseq data (to be published elsewhere).