The research lab of Mark H. Kaplan, PhD studies transcription factors that are involved in the development of T helper cell subsets and how those cells contribute to inflammation in allergic and autoimmune diseases.

The overall focus of the Kaplan laboratory over the last 20 years has been on understanding the transcriptional regulation of T helper cells as they regulate inflammatory immunity. The early years of the laboratory’s work focused on the characterization of STAT4 and STAT6 function, working at multiple levels, from examining gene regulatory mechanisms and chromatin modifications, to defining how factors control cellular function and inflammatory disease in mouse model system, to finally trying to take observations to using human and patient samples to demonstrate the link between basic research and human immune-mediated health and disease.

The laboratory’s multi-level approach, performing hard-core studies on transcription factor-dependent gene regulation, defining transcription factor-mediated changes in cell function in vitro and in vivo, and ultimately showing conservation in human samples and where possible, linkage to human disease, continues to be a strength in its studies.

A large portion of work in the lab focuses on understanding how STAT proteins regulate the development of T helper cell differentiation programs. Over the last 20 years of the program, the lab has defined STAT4 target genes during Th1 differentiation, determined mechanisms of STAT4-dependent gene activation including examining chromatin modifying enzymes and DNA methyltransferases, defined in vivo functions of STAT4-dependent responses in inflammatory disease and pathogen immunity. The lab has characterized STAT4 isoform function in vivo, and has recently demonstrated altered expression of STAT4 isoforms in patients with inflammatory bowel disease. The lab has defined how STAT4 integrates with other transcription factors that promote the development of Th1 cells. Among downstream targets of STAT4, we have recently characterized Twist1 and Etv5 as downstream effectors of both STAT4 and STAT3-dependent immunity. We are now expanding our studies into an understanding of STAT4 function in myeloid cells during immune-mediated disease.

The Kaplan Lab identified an unexpected role for STAT3 in Th2 and now further explores how the STAT3 signal is integrated in various Th subsets. They identified several interesting aspects of STAT3 signaling in Th2 cells including a balance with activation of other STAT proteins, and the induction of genes that may identify a novel functional subset of Th cells.

This latter point links to another interest of the laboratory, allergic skin inflammation. Over a decade ago the lab developed a mouse model transgenic for a constitutively active STAT6 in T cells. These mice are predisposed towards spontaneous allergic inflammation, particularly in the skin. The lab has characterized the pathogenesis of skin inflammation in this strain focusing in two areas. The first uses this mouse model to test the interactions between the hyperactive Th2 immune response and dysfunction in the barrier function of the skin. The second approach in this area is to define how Th2 cytokines, specifically IL-4, impact keratinocyte gene expression and differentiation. We are using RNA-seq and ChIP-seq approaches to define how the IL-4/STAT6 pathway function in non-immune cells. 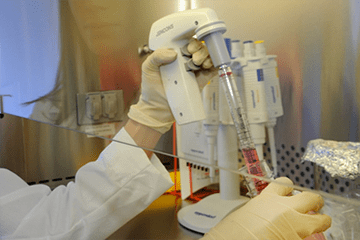 Among the most recent subsets of T cells described, Th cells that are primed for production of IL-9 are still very poorly understood. We have made significant progress in understanding the development and function of Th9 cells. We have demonstrated that PU.1 is a major transcription factor in the development of IL-9-secreting T cells, and that PU.1-expressing T cells are important for the development of allergic lung inflammation in several mouse models. This project has focused on PU.1 and over the past ten years the lab has demonstrated the ability of PU.1 to function as a switch factor, both repressing Th2 development as it increases Th9 development. More recently we have published microarray studies of Th9 cells and found several genes that suggest unique functions of Th9 cells. The lab is expanding work in this area to examine other PU.1-related ETS factors in the development of Th9 cells, and to examine other transcription factors including BATF and their contribution to IL-9 production and Th9 function.

Investigators here are also interested in understanding the biology of IL-9 during allergic inflammation and other types of immune responses. The lab recently identified TSLP as an important co-factor in promoting IL-9 production from human and mouse cells and are developing further projects to expand from that observation. Among other important questions in this area the lab is defining the relevant IL-9-responding populations during the development of inflammatory disease, and tracking the IL-9-secreting cells in vivo during initiation of inflammation and during allergen challenge. Th9 cells have roles in autoimmunity and tumor immunity that are still largely unexplored.

A final area of interest is allergic disease and there are ongoing studies in several areas. First, the lab has collaborated with physician-scientists at IU to examine immune and lung function in infants and toddlers with atopic dermatitis. Planned studies focus on testing the ability of food allergen elimination to affect lung function. The lab also has interest in understanding regulation of the IgE response in vivo, from the standpoint of examining the relative roles of Th2 and Tfh cells in generating low and high affinity IgE antibodies. Finally, the lab is collaborating with a biochemical engineer at University of Notre Dame who has developed novel reagents for both testing mast cell activation in the context of heterovalent allergens, and also developed reagents that inhibit allergen-stimulated IgE responses. This collaboration will refine the molecular development, and also perform more in vivo and molecular studies to assess the efficacy of this approach in an allergen model.