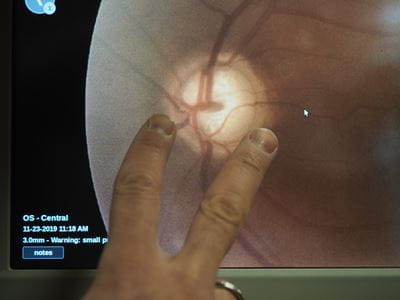 Glaucoma is the leading cause of blindness and vision loss in the United States, with the number of cases expected to rise to 6.3 million by 2050, according to the National Eye Institute.

This age-related condition occurs when fluid builds up within the eye, causing high pressure and irreversible damage to the optic nerve. The disease progresses slowly, so many patients don’t notice the earliest signs. Unfortunately, vision loss caused by glaucoma can’t be undone.

January is National Glaucoma Awareness Month. Indiana University School of Medicine Department of Ophthalmology specializes in glaucoma research, treatment and prevention. Get to know the faculty members leading these efforts:

Louis B. Cantor, MD
Louis B. Cantor, MD, is the Jay C. and Lucile L. Kahn Emeritus Professor of Ophthalmology at IU School of Medicine. He completed his undergraduate and graduate medical education at Indiana University and was an ophthalmology resident at Indiana University, graduating in 1984. In 1985, he completed his glaucoma fellowship at Wills Eye Hospital in Philadelphia before joining the Department of Ophthalmology as director of the Glaucoma Service. From 1986 through 1989, Cantor served as chief of Ophthalmology at Eskenazi. From 1996 until 2006, he served as director of the Ophthalmology Residency Program for the department. In 1999, he attained the rank of Professor of Ophthalmology. Cantor also served as chair for the department from 2009 to 2017. Cantor is a frequent invited lecturer and has presented several named lectureships. He is the recipient of multiple grants and has published more than 100 abstracts and 80 peer reviewed publications.

John T. Lind, MD
John T. Lind, MD, is a 2004 graduate of IU School of Medicine and holds bachelor’s and master’s degrees in biology, as well as a certificate in Business Foundations. He completed his transitional internship at St. Vincent Hospital in Indianapolis in 2005; a three-year residency in ophthalmology at Saint Louis University Eye Institute in Missouri in 2008; and a fellowship in glaucoma at the Bascom Palmer Eye Institute at the University of Miami Miller School of Medicine in 2009. He was named the chief resident in 2017. Lind was an Assistant Professor of Ophthalmology at Saint Louis University and became an Associate Professor at Washington University in Saint Louis before joining the faculty at IU School of Medicine in 2019 as an Associate Professor of Ophthalmology and Assistant Director of Medical Student Education. His research interests include glaucoma surgical devices, complications of glaucoma surgery and medical education. He has published articles concerning cornea, ocular microbiology and glaucoma.

Elizabeth Martin, MD
Elizabeth Martin, MD, joined the Indiana University School of Medicine Department of Ophthalmology in 2018 as an assistant professor of clinical ophthalmology with a focus in glaucoma. She is the associate residency program director. Martin began her eye-care career working as an ophthalmic technician for a glaucoma practice in her home state of Washington. That work inspired her to go to medical school. Martin attended medical school at the University of Washington in Seattle. She completed her residency at Cook County Hospital in Chicago and a glaucoma fellowship at the Moran Eye Center at the University of Utah in Salt Lake City. Treating glaucoma means treating the same patient four or five times a year, sometimes for decades. This means doctors and patients can build strong and meaningful relationships. And for Martin, that’s what makes practicing in this area of health care so special.

Richard M. Schroeder, MD
Richard Schroeder, MD, earned his medical degree at the University of Chicago Pritzker School of Medicine after attending the University of Notre Dame as an undergrad. He completed his internship at St. Mary's Hospital in St. Louis, and residency and fellowship at Washington University. At first, Schroeder planned to practice comprehensive ophthalmology; but as his training continued, his interest in the glaucoma service grew. Influenced in part by several close mentors who worked as glaucoma specialists, he ultimately decided to pursue the never-ending goal of lowering pressure and preventing vision loss in a field that is continuously improving and innovating. Additional clinical interests include cataract and anterior segment surgery.

Weiming Mao, PhD, MB, BS
Research in the Mao Lab focuses on glaucoma and retinal ganglion cells patients lose that transmit visual signals from the eye to the brain. The research team found that cell signaling changes elevate high eye pressure, which kills retinal ganglion cells and causes glaucoma. Currently, the lab is working on understanding the role of the Wnt signaling pathway in the trabecular meshwork tissue.

Padmanabhan Pattabiraman, PhD
The Pattabiraman Lab is studying the molecular mechanisms involved in achieving a normalcy in intraocular pressure as a cure for glaucoma and understanding what goes wrong to cause increased ocular pressure that causes glaucoma. Researchers also study the racial disparity in the preponderance of glaucoma in African Americans compared to Caucasian population.

Tasneem P. Sharma, PhD
The Sharma lab focuses on intraocular and intracranial pressure associated pathogenesis, generation of patient specific neuronal cells, disease modeling of central nervous system diseases, and neuroprotection/regeneration therapeutics. The current aim is developing a range of new glaucoma therapeutics for neuroprotection and pharmacological manipulations of degenerative pathways in glaucoma. Studies identify pathways or molecules that can best be treated with drugs that are beyond intraocular pressure suppression and instead focus on survival of retinal ganglion cells. The lab also works with the Translaminar Autonomous System.