Jordan Saunders, a second-year medical student at Indiana University School of Medicine, had posted a message offering to pay it forward by mentoring students underrepresented in medicine with the application process to medical school. Students at IU School of Medicine and around the country had been pulled out of their clinical rotations to ensure their safety due to the COVID-19 pandemic, and many wanted to find ways to use their time to help others.

The response to the April 20, 2020 tweet was overwhelming, garnering 69 retweets, 300 likes, and over 40 direct messages. A few days later, Aaron Gilani, a third-year IU School of Medicine student, reached out to Saunders, “I think we can start something here,” he said. 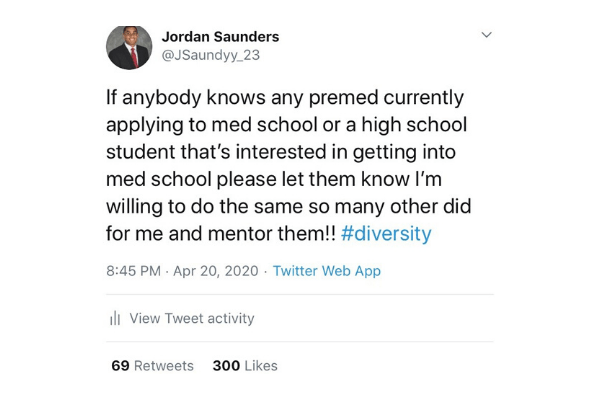 Within 24 hours, Gilani drafted an entire website, outlining a national mentoring program. Over the next month, he rapidly scaled the idea and spearheaded the creation of a new nonprofit, Prescribe It Forward, alongside Saunders, and other IU School of Medicine students, Alexandra Jostes, and Eric Galante.

The mission of Prescribe It Forward is to provide free mentorship for medical school applicants who struggle to find guidance as they embark on their journey to becoming medical students. Their primary focus is to serve students who are underrepresented in medicine, including underrepresented minorities (URM), first-generation, LGBTQIA+, or otherwise disadvantaged applicants.

Over the course of two months, they have recruited 515 mentors across 39 states and connected them with over 575 students, indicating the high need for this service.

Alexa Howser, an incoming senior at IU Bloomington is one of the first 575 students to receive mentoring, “My experience has been great,” said Howser. “My mentor even remembered the date I took my MCAT exam and made sure to give me some last minute words of encouragement. There are so many important hidden tips that students should know about the application process, and they might not know them without guidance from a mentor.”

The process of applying to medical school has many barriers. Costs can soar to as high as $10,000 or more, when accounting for application fees, tutoring, MCAT prep and testing. One of the most important facets of Prescribe it Forward’s mission is that it is free. 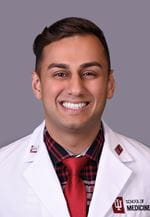 “There are so many things you don’t know until you get through the process like how to apply and how to interview. When you come out on the other side, you have a much clearer idea and can share with others,” said Gilani, who now serves as executive director of the organization.

“Medical school is always changing and it may look very different than what a current or older physician has experienced,” said Galante, who serves as associate director of mentor relations. “Having someone mentor you who is living it now is valuable because they are closest to what the process looks like.”

“My first mentor was a black medical student,” said Saunders, who now leads the Matching Committee. “It was such an eye-opening experience. He told me, ‘I think you can get in,’ and that gave me a lot of confidence.”

In addition, students often don’t have many friends or people around them who are pursuing the same goal.

“I didn’t have a ton of support and didn’t know where to find it. I’ve learned a lot from my mistakes and have grown to love mentoring. It’s something I want to continue doing,” said Jostes, a first-generation medical student who leads mentor relations.

Prescribe it Forward has quickly mobilized and recruited student leaders from around the country to serve on the executive board, including from Duke University School of Medicine, Albert Einstein College of Medicine, University of Virginia Medical School, and others. Students are now in the process of recruiting members to serve on the board of directors.

Carlos, a first-generation medical doctor, joined the board because he sees the value in Prescribe It Forward’s mission.

“By engaging and equipping pre-medical students, we can take their passion for medicine and turn it into a successful pursuit culminating in an acceptance letter to medical school,” said Carlos.

Mehta first had a chance to work with Gilani during a hematology-cardiovascular medicine course and was impressed by his commitment to help the future generation of physicians.

“I believe Prescribe it Forward has developed a nationwide network of mentors that will provide the invaluable knowledge, support and encouragement to help those pre-medical students who do not have the financial benefit or the well-established network that favors their ability to get into medical school,” said Mehta. “The field of medicine is better when we have a more diverse population of providers.”

The leadership team envisions scaling the organization to maybe one day serve residents or students in other health care fields, such as dentistry.

“We are trying to change the culture behind medical school admissions and create a culture of inclusivity that doesn’t focus on quantitative metrics. Our vision is to provide a one-stop-shop for mentorship in medicine that is free forever.” Gilani said.

How You Can Get Involved

Are you a current medical school in the United States? Sign up to become a mentor.

Are you a high school or college student and interested in pursuing medical school, but don’t know where to get started? Sign up to get a mentor.

Interested in what IU offers? The Masters in Science in Medical Science Program at IU School of Medicine allows students from especially disadvantaged backgrounds to work at the graduate level to gain experience and prepare for medical school.