History of Medicine Book of the Week: The Medical Department in the World War: Volume 11—Surgery (1927) 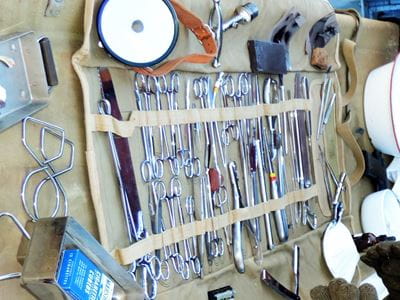 Expanding the Frontier of Battlefield Medicine in The Great War

(right) The Operating Case Small, Model 1917, as used by frontline surgeons of the US Army Medical Corps during the First World War.[i]

Officially recognized as the eleventh volume in the series The Medical Department in the World War, this technical manual simply titled Surgery, is more than just a historical account of surgery in the Great War.[ii] Within its pages can be found all the uncertainty, destruction, improvisation, heroism, innovation, and determination that frontline medical personal faced in one of the greatest conflicts the world has ever seen. So much of World War I was different from anything experienced before, both in terms of scale and technology, and it quickly became clear that the average surgeon was dealing with things he had never been trained for or told to expect. In fact, there were to be more contributions made to military medical science during the course of the war than there had been in the entire course of the previous century.[iii] The greatest scientific innovations and industrial breakthroughs are usually the products, or rather reactions to, some of the most destructive conflicts in history, and the field of medicine is no exception.[iv]

With each and every casualty a case study in the art of modern battlefield medicine, the men and women of the US Medical Department struggled to, quite literally, put the world back together again. It was also the Medical Department’s first official debut. Although it had technically existed since 1776, it was only shortly before the World War I that the department was officially created and vastly expanded, professionalized, and reorganized into specific entities. These included the Army Nurse Corps, the Sanitation Corps, the Medical Corps for general surgeons, the Dental and Veterinary Corps etc., each responsible for a specific respective function in the field.[v] Yet, much of this new-found knowledge and administrative procedure might have been lost to history had it not been for the foresight equally exhibited by the Medical Department after the war. In the post war period, the Army began to collect various amounts of data, information, statistics, field reports, etc., and compile them all in manuals like these. This was done not only to historically record all the medical lessons of the Great War, but to pass them on.

Beginning in 1923, the first of these fourteen volumes were released, with volume eleven arriving in 1927, a copy of which can be found at the Leo J. McCarthy, MD, History of Medicine Room and Collection at the Ruth Lilly Medical Library here at IUPUI. In total, the entire project would take over nine years and there would be no less than twenty-nine people listed as being responsible for compiling volume eleven alone. Each of these editors appear to have then been furnished with further staff to help with the research, all of which was overseen by the Surgeon General himself acting as Editor-in-Chief, a job which fell to General Merriate Weber Ireland. Ireland had been a field surgeon in the war and went on to command the entire overseas medical contingent of the American Expeditionary Force in France; thus, he possessed both the practical experience and the administrative knowledge necessary to complete a project of this type.[vi]

However, this did not change the fact that there had been hundreds of thousands of American soldiers wounded in France and therefore thousands of reports, statistics, cases, and patient files to pore over and review. Not only did the editing team have to track all of these down, but they then had to make sense of them all and put them together to create a statistical analysis of the total number of casualties and their treatment. Additionally, the Medical Department was also tasked with matters of diet, sanitation, disease prevention, and conducting yearly physical reports, during the war. There was to be a volume written about each of these subjects as well, not just about field surgery, so the process of dedicating resources to each of these was immensely time consuming.[vii] In short, the war may have provided the best testing ground for new methods of surgery and medical care, but it also produced a giant stack of paperwork that had to be carefully consulted and examined before beginning to use it to train future surgeons.

One of the fundamental changes in casualties of war, as noted between wars of the previous century and that of WWI, was the degree to which artillery made up a greater portion of the total wounded.[viii] It is perhaps no surprise then that the book begins with an examination of the artillery and small arms used by each country, with respect to the types of wounds they were seen to have produced in the field and then goes on to with their express treatments. For every few normal cases though, there was at least one irregular one, one that didn’t fit the “checklist” or standards which surgeons had been prepared for.[ix] For example, one the primary things the first section examines in detail is small arms fire, particularly what a bullet can be expected do when it strikes a human body. Will it remain intact or deform itself and mushroom? Did it hit a vital organ or blood vessel? Will it create a clean entry and exit wound, or will it tumble and become lodged in an unexpected place, travelling a great distance after striking? These are just some of the questions which every surgeon had to answer before even beginning the treatment process.

This was only type of wound produced by one type of weapon and there were of course different wounds which were created by bayonets, clubs, artillery shrapnel, poisonous gas, and countless other weapons.[x] Each one had to be identified so that the surgeon could know what to expect in terms of its recommended treatment and possible irregular conditions or extenuating circumstances. This is not vastly different from the job of a civilian trauma surgeon, except there were hundreds of thousands of cases and only a short amount of time to allocate to each patient, making speed, efficiency, and honed skills crucial to success and survival.[xi]

Volume Eleven, Surgery, explores all this and more, being principally divided into two main sections. The first deals with some general casualty statistics, wound production and identification, general surgery, the evacuation process, as well as a number of topics relating to the general care of the sick and wounded within this context. The second section is more specialized however, dealing with specific procedures and types of surgery, such as neurosurgery, empyema, maxillofacial surgery, ophthalmology, and otolaryngology, as each of these required more care and attention devoted to their highly specialized nature.[xii]

In summation, this book is not only a medical guide based on practical experience learned through the hardships and challenges of medical care in the First World War, but it also a window to history. This manual laid the groundwork for the training of future surgeons who would go on to serve in World War II, the Korean and Vietnam Wars, and beyond. Therefore, this book is not just a historical account of military medicine to be read and enjoyed, but is also a way to physically connect with the past, as you get to read and touch every page, just as someone once did almost 90 years ago. It is impossible to say how many hands have touched this book over the years, how many eyes have pored over its many pages, or how many great minds have been inspired by its contents. The only question is, will yours be next?

[i] Photo provided courtesy of the author, taken of an extant example held in his private collection.

[x] Thompson, “The Medical Department of the United States Army in the World War.”

[xii] Thompson, “The Medical Department of the United States Army in the World War.”