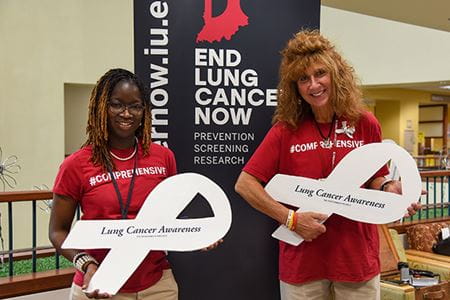 Lung cancer has an image problem, and Nasser Hanna, MD, wants to change that.

Nearly everyone in America could tell you what the pink ribbon stands for when it pops up on store displays, product packaging and social media feeds during the month of October. But how many people know that November is Lung Cancer Awareness Month or that the white ribbon represents ending the stigma surrounding the No. 1 cancer killer?

He is spearheading an awareness and advocacy initiative called End Lung Cancer Now.

According to the National Cancer Institute, an estimated 235,760 new cases of lung cancer and 131,880 deaths are projected in the United States this year. In Indiana—as well as nationally and globally—lung cancer is the leading cause of cancer deaths in both men and women. 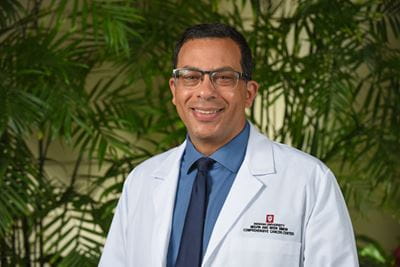 “Lung cancer is the big elephant in the room,” Hanna said. “It takes the lives every year of more people than breast cancer, colon cancer and prostate cancer combined.”

Indiana ranks a dismal fifth out of all 50 states for the most new cases of lung cancer in 2020. The Hoosier state has three big problems when it comes to eradicating lung cancer—a high number of smokers, low number of eligible people who get lung cancer screenings, and low participation in clinical trials for lung cancer.

With improvement in these three areas, most lung cancers could be prevented or successfully treated—now, Hanna said.

“We don’t have to discover anything new—we just need to implement what we know works,” he said.

When thinking of lung cancer, most people wouldn’t picture a vibrant, Black woman in her 40s who has never smoked—a registered nurse who practices a healthy lifestyle and leads her daughters’ Girl Scout troops.

“Lung cancer doesn’t discriminate. If you have lungs, you can get lung cancer,” said Alesha Arnold, RN, BSN, CCRP, a clinical research nurse in breast oncology at the IU Simon Comprehensive Cancer Center who has Stage 4 lung cancer. 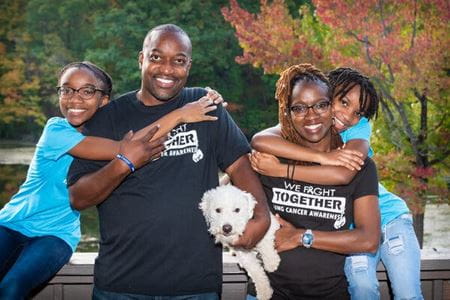 About 20 percent of women and 7 percent of men who develop lung cancer have never smoked.

For Arnold, breast cancer—not lung cancer—had long been of personal concern. Not only is she a breast cancer research nurse, but her mother died of breast cancer at age 51. Arnold knew the importance of doing breast self-exams and getting screening mammograms.

She was shocked by her diagnosis with advanced lung cancer in 2019 at age 44.

For several years, Arnold had a persistent cough. She and her primary care physician had been down the path of ruling out allergies and acid reflux. Then she developed back pain. A new doctor ordered some tests including a CT scan. It came back with an abnormality that turned out to be lung cancer.

Arnold knew her grandfather had died of lung cancer, but he was much older and had been a smoker. After her diagnosis, she learned other relatives had also been diagnosed with lung cancer.

“I discovered I had a genetic mutation that was germline which predisposed me to getting lung cancer,” Arnold said.

When people find out Arnold has lung cancer, their typical response is, “But you didn’t smoke, did you?”

Arnold is fighting the stigma and growing lung cancer awareness as an advocate with End Lung Cancer Now and a grassroots movement called the White Ribbon Project, which involves making and distributing large, wooden ribbons. These white ribbons are used to build a sense of community, promote awareness, tackle misconceptions about lung cancer, and promote messages of support, hope and empowerment. “We have brought the white ribbon project to Indianapolis and want people to be able to identify the lung cancer ribbon and know some of the statistics—that lung cancer is prevalent and anyone can get it,” Arnold said.

Elyse Turula has joined the effort, using the tools left behind in her garage by her master carpenter husband, Harry, who died of lung cancer in 2017. To date, Turula has cut and sanded more than 100 ribbons, often using a shiny, metal Craftsman jigsaw that’s been in Harry’s family for about 60 years.

“I hear his voice when I’m working: ‘Measure twice, cut once. Always know where your cord is—and where your fingers are!’” she said.

As Turula was out in her garage in October painting her ribbons white, her neighbor’s mother stopped by to see what she was doing and asked, “Are you priming those to paint them pink?” 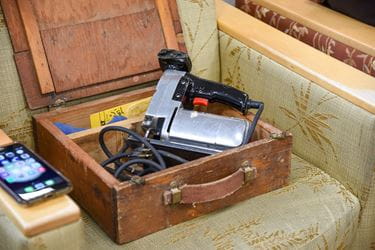 “No,” Turula explained as she began to talk about her loyal, fun-loving, hardworking husband of 27 years who died shortly after his 62nd birthday. The white ribbons would go to lung cancer patients, survivors and advocates.

Turula placed several ribbons in front of her own home on Halloween—the fourth anniversary of Harry’s passing. As trick-or-treating hours began, a man parked in front of her house and lit up a cigarette. Turula took the opportunity to compassionately strike up a conversation about lung cancer, asking him if he’d had a CT screening and directing him to resources on smoking cessation.

“It’s about changing the conversation,” Turula said. “If you want to stop smoking, there are people and programs to help you. Don’t let guilt stand in the way. Just move forward—and get a CT scan.”


Eliminating tobacco use in Indiana

Anyone over the age of 50 has lived through an era when smoking was so ingrained into American culture that it was allowed everywhere—restaurants, hotels, schools, even in hospitals and on airplanes.

Today in Indiana, about one out of every five adults smokes, ranking the state 10th in the nation for smoking. That’s not a Top 10 list anyone wants to be on. 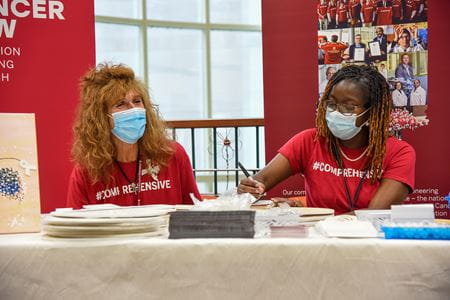 “We have to drive down smoking rates, and we know that will result in less suffering and death from cancer, cardiovascular disease, strokes and COPD,” Hanna said. “We have to put gasoline on existing evidence-based programs we know work for smoking cessation. That will have a marked effect on lung cancer.”

The Indiana Tobacco Quitline is a free resource available to all Hoosiers by calling 1-800-Quit-Now; more resources are available on the Quit Now Indiana website.

Community advocates are vital to getting the word out, especially in rural and low-income areas of the state, Hanna said.

“Rural Indiana has higher rates of smoking, higher rates of cancer, lower socioeconomic status and less access to high-quality health care and prevention services,” he said. “This is where we must go.”

Along with educating the public, End Lung Cancer Now aims to educate primary care providers about the importance of recommending screening CTs to patients who meet risk criteria. The organization also hopes to partner with radiologists throughout the state to bring mobile CT scanners into rural communities.

“Research shows some primary care physicians are poorly educated on the importance of getting lung screening scans—they are grossly underordered,” Hanna said. 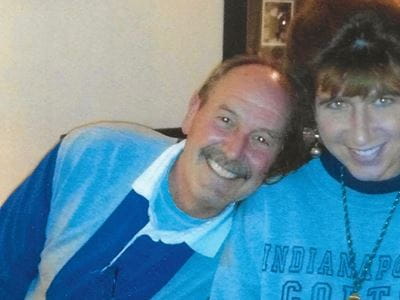 When Harry Turula developed a pain in his upper lung in 2015, his physician ordered an X-ray and said everything looked good—but failed to order a CT scan. It would be another year before a pulmonologist would order the screening, despite Harry’s family history of lung cancer and his personal smoking history.

Fewer than 10 percent of people eligible for CT lung scans get them, Hanna said. By contrast, more than 70 percent of eligible people schedule their colonoscopies and mammograms.

According to the National Cancer Institute, 57 percent of lung cancer is diagnosed at Stage 4.

“Screening scans by themselves would reduce lung cancer mortality by at least 20 percent,” Hanna said.

The U.S. Preventive Services Task Force recommends annual lung cancer screening for anyone ages 50 to 80 who has a 20 pack-year smoking history and currently smokes or has quit smoking within the past 15 years. As part of the Affordable Care Act, lung cancer screening is free for eligible patients.

The last piece of the puzzle is increasing participation in clinical research trials for lung cancer—admittedly the most challenging component, Hanna said.

Even when caught early—at Stage 1—lung cancer has a cure rate of less than 70 percent. Comparatively, Stage 1 breast and prostate cancers have close to 100 percent 10-year survival rates, Hanna said.

Yet there has been progress in treating lung cancer. Many patients diagnosed with Stage 4 lung cancer now live two years or longer—up from an average of six to 12 months just five years ago, Hanna said.

Advances are only made through clinical research to develop better therapies.

“Less than 5 percent of Hoosiers with cancer participate in a clinical trial, which means 95 percent of people with advanced cancers are not getting the better therapies of tomorrow,” Hanna said. “Every advance in cancer that you will read and hear about in the next five years is available today, but you have to participate in the clinical trial.”

In her role as a clinical research nurse, Arnold walks patients through the process of participating in clinical trials every day. Now her work seems even more vital—and personal.

“For me, advocacy and research are really what I’m about,” Arnold said. “I’m about the advancement of finding a cure for this disease and allowing patients to live longer and healthier lives. We need to do what we can to create more options for patients, and that’s the importance of research.” 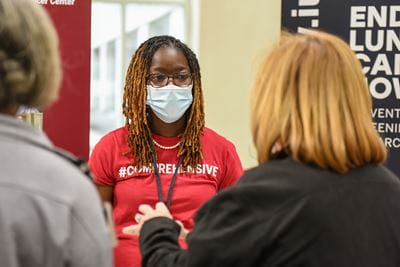 With the large number of people affected by lung cancer, Arnold sees huge potential for advocacy and fundraising. There’s no reason lung cancer couldn’t achieve the same level of support as generated by the well-known organizations dedicated to ending breast cancer, she said.

“I would love to see that same type of energy and magnitude of patients and their family members who feel like they are supported,” Arnold said. “They need to know there is a community out there for them.”