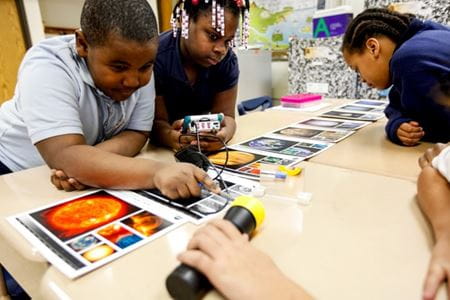 Students at IPS’ Joyce Kilmer Academy School 69 and James Russell Lowell School 51 have been exploring the science of the environment since last fall. Among experiments they have conducted: using flashlights and mirrors to demonstrate that light is energy; testing their predictions on how bright the flashlights must be to shine “through” a book; and running experiments on the effect of light on plants.

The students’ excitement with science has been encouraged by the joint efforts of Indiana University-Purdue University Indianapolis’ Discovering the Science of the Environment program and the Felege Hiywot Center, which serves Indianapolis children by teaching gardening, science, engineering and environmental stewardship. The teams have partnered with the principals, teachers and students at the school to deliver hands-on inquiry-based science.

Discovering the Science of the Environment’s work with IPS schools has been developed with generous programmatic investment in STEM from Dow AgroSciences. Additional funding for undergraduate internships is provided by the IUPUI Solution Center, with funding for technology upgrades provided by NASA.

The IUPUI program is offered by the Center for Earth and Environmental Science in the School of Science. The Felege Hiywot Center is run by IUPUI alumna and former Lilly chemist Aster Bekele. Joyce Kilmer Academy School 69 is led by Principal Kris Walker-Guess, who has been an enthusiastic partner.

The IUPUI team includes environmental science experts who are recent IUPUI graduates and current IUPUI undergraduates. They began working with third- through sixth-graders at the IPS schools in the fall, just as the Felege Hiywot Center’s programming was ready to expand and the school’s new laboratory was ready for action.

Bekele had been running an in-school classroom science club for several years at Joyce Kilmer, pulling small groups of students who were eager to learn science from their normal classroom activities each week. But the demand for her programming was growing, and the school renovated a room as a science laboratory — perfect timing for teaming up with IUPUI.

As the program started in the fall, the teams planned to meet with all of the students in Grades 3 to 6 for an hour every other week.

“But it turned out that the kids loved it and asked their teachers to have the science activities every week, and that’s what we did,” said Pam Martin, associate professor in the School of Science and the School of Liberal Arts at IUPUI. “The program has worked at the school because of the great partnership with Felege Hiywot Center, the support and interest of the teachers and principals at Joyce Kilmer, and the enthusiasm of our IUPUI undergraduates.

“These students go in like an army to deliver hands-on science. We try to have one IUPUI student for every five IPS students,” said Martin, who is also director of the Center for Earth and Environmental Science. “Tapping into the undergraduates in this way brings additional resources to the IPS schools while giving undergraduates a chance to put into action what they have been learning in the classroom.”

Elizabeth Johnson, who recently graduated from IUPUI with a degree in earth sciences and is coordinating the education programming, sees the program from both sides.

“To me, the really exciting part of this program is the simultaneous learning that is occurring at both the elementary and the collegiate level,” she said. “Joyce Kilmer students are being exposed to valuable, foundational science concepts, and IUPUI students are gaining confidence in presenting their scientific knowledge.”

The program has been offered during the school day at Joyce Kilmer Academy School 69 and after school as “science club” at James Russell Lowell School 51. The IPS science club programs were started by Felege Hiywot’s affiliation as a 4-H site.

As warmer weather approaches, the focus is shifting outdoors, to gardens dubbed “STEM in the garden.” The gardens are connected to after-school science clubs at School 69, School 51, SENSE and Brookside Park. Environmental science programs similar to those delivered to students in the classroom will be provided to students in the clubs but with time for longer-running experiments.

“The elementary students are naturally scientists; they just don’t always start off knowing it,” Bekele said. ”But when they see all the connections to the world around them, they open up to it and even start bringing their own examples to us. The kids come back from the weekend running up wanting to share a connection they made to science on their own.”

The Discovering the Science of the Environment program also will deploy its mobile resource trailer — which contains interactive technology tools, Web interface and GIS mapping capabilities — to the after-school science clubs. The trailer kicks off its spring programming on Earth Day, Apri8l 22, with students beginning a campus tree survey at Joyce Kilmer Academy.