‘We Have to Generate New Knowledge’

Anantha Shekhar, MD, PhD, began wondering how the human brain works as a teenager – when he saw how a tumor changed the personality and eventually took the life of a close friend. Shekhar would graduate from medical school in India before coming to IU School of Medicine in the late 1980s for his residency in psychiatry and a PhD in neuroscience. He joined the faculty in 1989. Today he oversees all research activities at IU School of Medicine. His […] 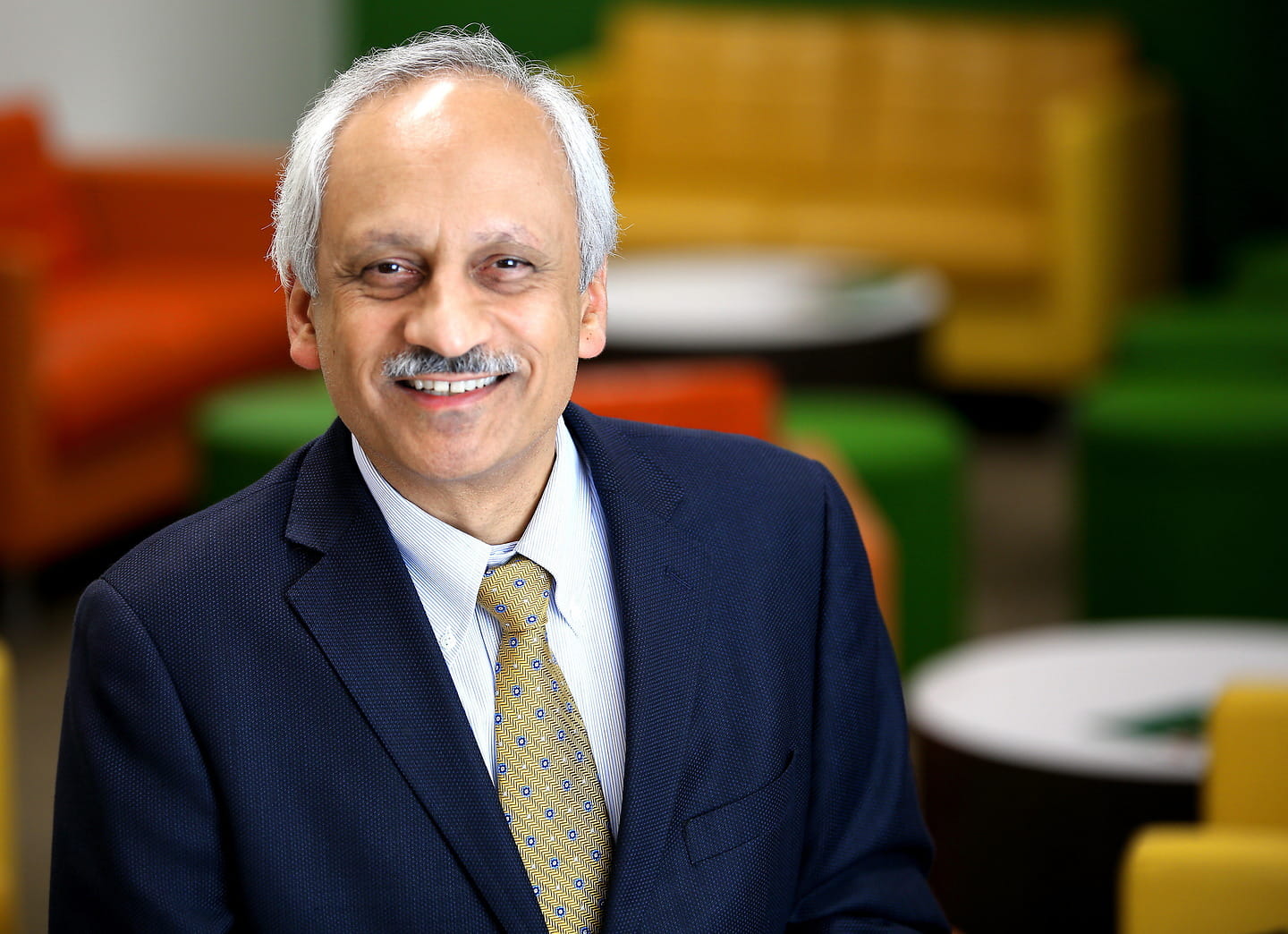 Anantha Shekhar, MD, PhD, began wondering how the human brain works as a teenager – when he saw how a tumor changed the personality and eventually took the life of a close friend. Shekhar would graduate from medical school in India before coming to IU School of Medicine in the late 1980s for his residency in psychiatry and a PhD in neuroscience. He joined the faculty in 1989. Today he oversees all research activities at IU School of Medicine. His conversation with Bobby King has been edited for space.

What does your job mean on a day to day basis?

First is really making sure we have the resources and support for the scientific activity of a large group of innovators and researchers. That’s one of my big jobs – to make sure that I have the pulse of these 600 plus people. Second is we have something like 450,000 to 500,000 square feet of research space across multiple buildings. Obviously, there is maintenance and different types of challenges, but for me, the main thing is how do we keep that space state of the art for doing research and remain most productive in terms of dollars per square foot of funding generated out of it. Then, ultimately for us as a knowledge company, if you want to call us that, we want to generate and publish new knowledge to make impacts.

IU School of Medicine is known for curing testis cancer. Are we close to another monumental breakthrough like that?

That’s a tall order. Some of these kinds of big breakthroughs require some level of luck. Obviously, there’s got to be incredible, talented researchers… But also it is where you are and what time you are doing certain things. Last year, our faculty cured two childhood genetic diseases – X-linked rickets and hereditary amyloidosis.  I think with Precision Health Initiatives we have some potential to make a similar kind of impact as in testis cancer… My sense is that the next one would be something like children’s sarcomas. I think another area where we’re going to have a big impact nationally is in Alzheimer’s disease. We are investing a lot in these areas.

Most of us grew up with the idea someone might come up with “a” cure for cancer. But, with initiatives such as Precision Health, is that notion outdated?

One of the things that we have learned – cancer is an example but this is true for other diseases like diabetes and Alzheimer’s – is that these are not single diseases. Most cancers have multiple mutations. For example, in breast cancer, there are maybe potentially 400 different mutations and they can all potentially cause cancer. That is what we’re beginning to realize, and why the traditional way of treating all breast cancer patients with the same kind of regimen is no longer acceptable and soon will be completely discarded. We’re just beginning to learn the same thing with Alzheimer’s. Precision Health, really at the basic level, is how do you understand a person’s disease in the most precise way to tailor treatments for them.

Your own research has touched on anxiety, schizophrenia, depression. Do we understand those areas better now than when you started 30 years ago?

I don’t think we have actually figured out exactly what is going on – the actual answers. But I think we are getting different levels of information now telling us how complex the brain is. More than half of the genes in our body are dedicated to the brain. Here is one organ that takes half of the information in our genetic code to actually build it. So it is a very, very complex organ. It is an organ that learns all the time. If you are 25 years old, it represents 25 years of re-engineered circuits … So the way your brain is wired is very different than mine. And of course, there are a lot of different diseases that affect this process as well. I think we are now understanding the complexity better. But that is just the beginning of finding solutions.

One of Indiana’s grand challenges is dealing with addictions. How do we make a dent in that?

It’s a very complex problem rooted in a lot of medical and psychosocial determinants of health. It starts with an addiction. But an addiction is just the latest manifestation of a series of problems. It’s a combination of people with genetic susceptibilities and chronic illnesses that have no good treatments. It is the behavior of providers that have not been very thoughtful of long-term consequences. We have sort of created a culture where pain medicines were given freely and for relatively long periods of time without risk-to-benefit ratio kinds of thought. That’s the second part. And the third part is just the economic aspects of it. There are people accepting this as a way of life. They don’t have a lot of other ways of getting out of the cycle of poverty, addiction and other sorts of social problems that they are trapped in. And there is a small element of pushers, drug companies and others who have sold drugs aggressively.

What can we all do better to manage our stress?