Even if a person survives a heart attack, its effects set the stage for future trauma. Rohan Dharmakumar outlines those risks—discoveries that could allow the Krannert Cardiovascular Research Institute to limit damage and prevent tragedy. 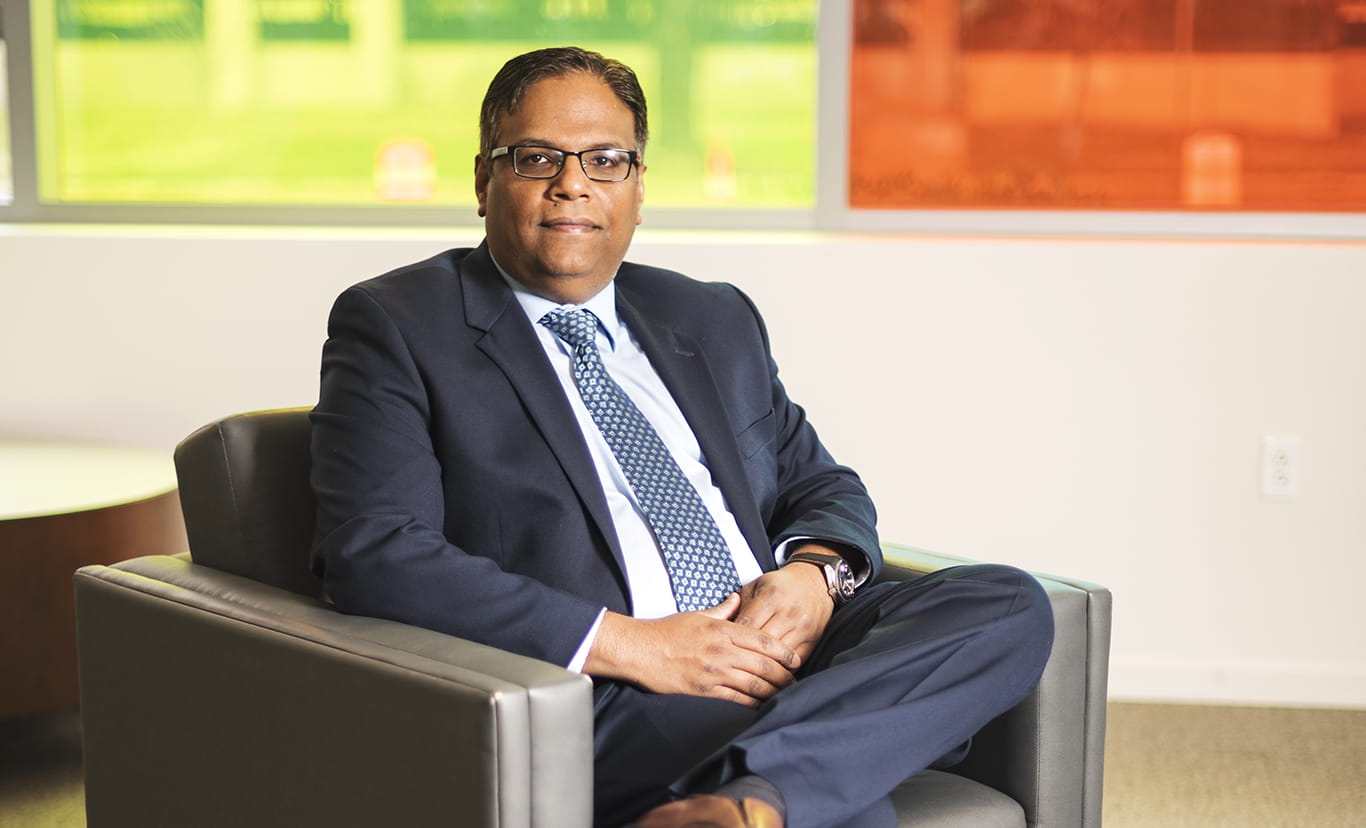 ROHAN DHARMAKUMAR SEES his 20 years of cardiovascular research in terms of a story—a story still unfolding, a story of the human heart.

Trained in subjects like non-linear physics, his story isn’t one of metaphors. It’s the story of his understanding of heart attacks, their long-hidden aftermath, and plot twists with the potential to change the way cardiologists look at how the heart is damaged following major cardiac events.

For Dharmakumar, PhD, the story isn’t just about the damage done from the blockage of major vessels—the acute attack. It’s about hemorrhages from the tiny blood vessels embedded in heart muscle, which his studies show can lead to heart muscle death even after major arteries are flowing free again.

The current and long-held understanding of heart attacks is that “time is muscle”—that clearing blockages and clearing them quickly is all-important for preserving viable heart muscle. What Dharmakumar has learned—during his stints at Northwestern University in Chicago, Cedars-Sinai Medical Center in Los Angeles, and now at Indiana University School of Medicine—is that these microhemorrhages can be nearly as destructive as blockages.

“In animals and humans, we see there is a continuous death of heart muscle,” he said. “It is a paradigm shift. It is not only time, but whether the small vessels are bleeding after the major vessels are opened or not. That was a recent discovery in our lab.”
For Dharmakumar, the discovery is the latest chapter of the story of the heart he’s been unraveling for two decades. It’s a story he plans to expand as the inaugural director of the Krannert Cardiovascular Research Center.

Krannert, of course, is a legendary name in cardiology and at IU School of Medicine. The Krannert Institute is where Harvey Feigenbaum, MD, pioneered echocardiology. It is where Douglas Zipes, MD, greatly enhanced the understanding of all types of cardiac arrhythmias and helped develop therapies for hundreds of thousands of patients. But in the last two years, some dramatic changes have been taking place in IU cardiology.

In 2020, IU School of Medicine and Indiana University Health formed a joint enterprise to boost collaboration on research, clinical care, and resident training—the Cardiovascular Institute. That coincided with the hiring of Subha Raman, MD, from The Ohio State University, to guide the enterprise. Then, in 2021, the Krannert Institute was reimagined as the Krannert Cardiovascular Research Center, an engine for innovation.

Dharmakumar is familiar with the Krannert legacy. He wants to honor it and build on it. But he also wants to make engineering and the physical sciences a larger piece of the equation.

One of his favorite phrases is, “The question is…” To help him get answers, he will need Krannert’s existing roster of physicians and scientists. But he may also look in some different directions, such as recruiting the occasional Purdue University bioengineering grad.

As Raman sees it, Krannert has a valuable legacy, one now moving into a new era. “This is a great and timely advance from where we started,” Raman said. “Technology tailored to address significant unmet needs emerges only when we have leaders like Dr. Dharmakumar engaging a broad range of stakeholders in cardiovascular research and innovation.”

IN SOME WAYS, Dharmakumar’s seminal work is a great example of how technology—and a fresh perspective—can pay big dividends.

Evidence that there is hemorrhaging in the heart has been around for decades. But until recently, it received little research focus. For Dharmakumar, its presence—and unknown effects—was an itch that he needed to scratch. “I have always been plagued by that question—does it really matter?” he said. “We know that hemorrhagic stroke is terrible—it’s one of the worst strokes you can have. So, we’ve always been thinking there’s got to be something here.”

At Northwestern, Dharmakumar and his colleagues found that this hemorrhaging led to deposits of iron particles in the heart. Their presence seemed to prolong healing after a heart attack, but how this worked remained a mystery.

At Cedars-Sinai, his team determined that the iron particles from the hemorrhaging crystallized into sharp particles that damage the responding immune cells, causing them to spew toxins. Because the iron never left the heart following an attack, the result was persistent inflammation, adverse effects on heart rhythm, and eventual heart failure.

In August, Dharmakumar came to IU, where he and his colleagues began publishing some of their most exciting discoveries yet. In January, they described, in the Journal of the American College of Cardiology, how the death of heart tissue doesn’t end when blocked vessels are reopened. In fact, for half of the large animals in their study with hemorrhage, a second wave of heart muscle cell loss occurred—doubling the size of the zone impacted by the heart attack.

“Most people leave the hospital after a heart attack feeling well but don’t appreciate the lifelong risk of things like heart failure and sudden cardiac death from an arrhythmia,” Raman said. “This work helps identify nearly half of patients successfully treated for a heart attack that are at higher risk of these complications.”

Raman said the discovery sets the stage to better identify and treat high-risk individuals before leaving the hospital, improving their chances of staying healthy long-term.

And, soon to be published, a study by Dharmakumar and his collaborators shows how, in animal models, removing the effects of hemorrhage can lead to a better recovery.

The findings opened the door to a pilot study, which began in March, that will test the therapy in humans. If it shows promise, it could lead to a clinical trial based at Krannert. “We are putting a lot of resources in place and assembling the machinery well ahead of time because we think it’s going to be a positive study,” Dharmakumar said.

And there are other areas for potential breakthroughs in his sights:

Much further down the road, he wants to improve the effectiveness of stem cell therapies as a tool to heal the heart.

Several of the advances are coming to the fore now due to improvements in magnetic resonance imaging for heart patients, a key component of his work as associate director of the Biomedical Imaging Research Institute at Cedars-Sinai. And it goes back to Dharmakumar’s long-held interest in using technology to advance health care.

RAISED IN CANADA to Sri Lankan immigrants, Dharmakumar grew up hearing stories about the deaths of two of his grandparents due to heart attacks. “That always stuck with me, as a kid, to work on that. I didn’t know what I could contribute, but it was something I wanted to work on.”

Dharmakumar’s parents wanted him to become a physician, but he couldn’t stifle a passion for understanding how things work. At the University of Toronto, he earned undergraduate degrees in physiology and physics, a Master’s in mathematics, and a doctorate in medical physics. He would contribute to medicine, but not in the way his parents imagined.

His mentors suggested Dharmakumar focus his talents on the brain. They told him all the mysteries of the heart had been deciphered. He wasn’t buying it. And the heart just held too much fascination for him.

After his successes in Chicago and Los Angeles, the draw to Indianapolis was multi-layered.
He appreciated the approach of Raman, the director of the Cardiovascular Institute—connecting research and patient care in even greater ways, her appreciation of new applications of cardiac imaging, and her appreciation of the sciences and engineering in diagnosing and treating heart disease.

Then, there were dramatic differences between the patient populations in southern California and Indiana. At Cedars-Sinai, the medical center saw roughly 100 large heart attacks per year. IU Health sees 3,000. That’s more people to help and more potential research subjects. “We have many patients here in Indiana that are probably getting hurt quite badly, and it’s a place we can make an impact,” he said.

And then there was the Krannert legacy. As Dharmakumar’s scholarly work ventured into electrophysiology more than a decade ago, he learned of Zipes’ work. People he encountered in cardiology spoke highly of Krannert.

Some of his work is already complimenting Krannert’s history—chief among them how myocardial hemorrhage has implications for the heart’s electrical impulses. “That would be a handshake between the legacy of Krannert and what we’re doing,” Dharmakumar said. “It’s kind of the chronic heart failure arrhythmia story. But it’s not the end of it.”