Surgeons traditionally learned their craft with a scalpel in hand in a pressure-packed operating room. Gary Dunnington, MD, envisioned a better way, starting a movement to improve training. 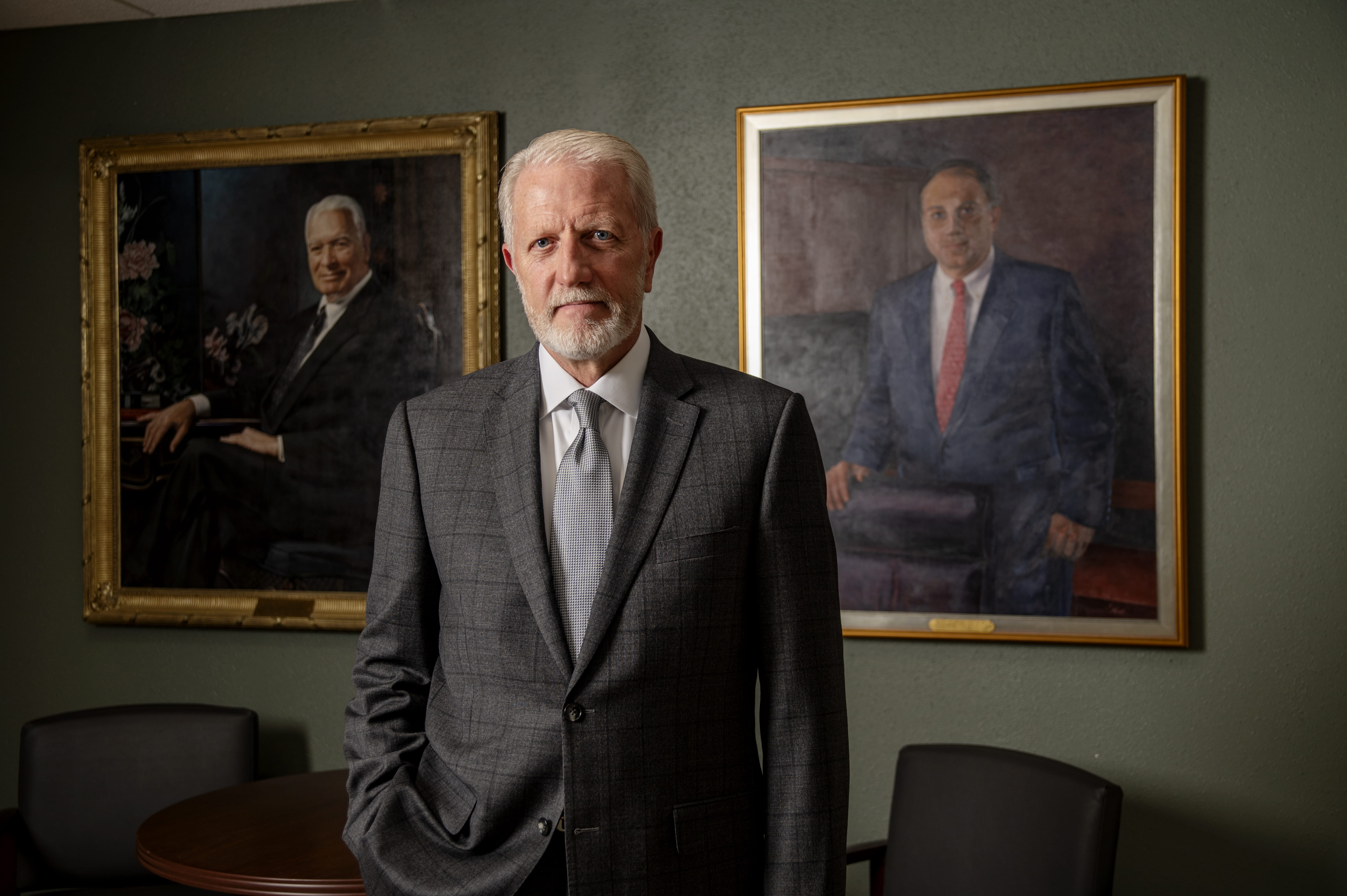 GARY DUNNINGTON, MD, traces his passion for surgical education to 1985, when he was chief resident at the University of Arizona and confronted by the realities of how his craft was being taught at the time. Sleep-inducing lectures with extensive slide decks in darkened classrooms. Surgeons who harassed, harangued, and belittled their residents in the operating room. Achievement measured mostly by case volume—and the assumption that high volume meant comprehensive training.

As Dunnington advanced through the time-honored system, he became preoccupied with a simple thought: “It was clear we were doing things the same way we had been doing them for 50 years,” he said. “I thought, ‘There’s got to be a better way.’”

For 36 years—including the last nine as Chair of Surgery at Indiana University School of Medicine— Dunnington has been finding better ways. He has been unafraid to tweak approaches or abandon them altogether. At three schools, he’s established new surgical skills labs. As labs proliferated, he led a team of surgeons to create a standard curriculum that’s in use across North America and around the world.

A 1980 IU School of Medicine graduate, Dunnington returned to his alma mater in 2012, with an appointment as the Jay L. Grosfeld Professor of Surgery. Quickly, he established a surgical skills lab, made education a priority in a clinically-oriented department, and raised the student ranking of the surgical clerkship from worst to first.

Along the way, Dunnington boosted resident research output by creating a master’s degree for two years of research work. He was part of a team that pulled off the biggest research recruitment in the school’s history—the landing of Chandan Sen, PhD, Gayle Gordillo, MD, and their team—35 people in all—from The Ohio State University. As a result, over the last three years, NIH research funding for the Department of Surgery has grown over 200 percent, pushing the department’s ranking from the mid-40s to No. 28. Sights are now set on the top 25.

And when AMPATH co-founder Joe Mamlin told Dunnington about the need for more surgeons in western Kenya, Dunnington supported the placement of a full-time IU surgical faculty member there, paving the way for a steady stream of visiting surgical residents, and enhancing the quality of the residency program training Kenyans to become surgeons.

After all that, Dunnington is now planning his retirement. By year’s end, he will leave the School of Medicine, end his clinical practice as a breast cancer surgeon, and begin spending winters in Arizona with his wife, Kim. The imprint he leaves is a deep one.

“Gary Dunnington’s legacy—as a surgeon, an educator, and a leader—has been profound,” said IU School of Medicine Dean Jay L. Hess. “He has mentored many aspiring leaders in the school and has transformed surgical education nationwide.”

DUNNINGTON’S PATH TO medicine began in New Castle, Indiana. He was the son of a minister and a homemaker who valued education for their four children. By age 13, Gary knew he wanted to be a physician. Although there were none in the family, it was just what he chose.

When other boys in basketball-crazy New Castle were captivated by sports, Dunnington was drawn to the forensic society. He and his teammates traveled the state, engaging in debates and perfecting their oratory. Echoes of the elocution he learned are reflected today in a voice that seems tailored to broadcasting.

Dunnington chose Ball State for college because it was close enough to commute from home. Even so, his father thought the 18 miles from New Castle was too far. He moved the family to Muncie and started a church there so the family could remain together.

Upon graduating from Ball State, Dunnington applied to just one medical school—IU—because no one told him to hedge his bets. He was accepted and assigned to the Muncie campus for his first year. It took only a brief surgical rotation to find his calling.

Weary of Indiana winters, Dunnington did his residency at the University of Arizona, eventually rising to chief resident. As he progressed, he began questioning the methods of training—the lectures, poor teaching in the OR and the lack of constructive feedback. When he followed a colleague to a conference of the Association of Surgical Education—which was focused on modernizing training—he had a new mission. “I remember walking the streets of Toronto and saying, ‘This is what I want to do with my life.’”

It didn’t look like the best career move. Surgical education was a nascent field, and Dunnington had been offered a surgical fellowship at the Mayo Clinic. But he followed a piece of advice he’s been offering medical students ever since: “Do what makes your heart leap.”

Dunnington began absorbing new teaching methods wherever he found them.

At the time, it was typical for surgeons to provide lectures to their students and residents. Instead, Dunnington became an early adopter of a new approach—problem-based learning—that presented learners with case facts and asked them for solutions. The approach was engaging, and studies showed it was better for learning. He also conducted research showing the value of nurse educators and structured exams that use standardized patients to teach and assess clinical skills like physical exams.

As Dunnington began to address the challenge of improving teaching in the operating room, he allowed a colleague to observe his teaching. He came away humbled. She saw he was missing teachable moments and suggested he help residents focus on the parts of the procedure that gave them the most trouble. She suggested a pre-op briefing at the scrub sink, slowing things down and giving explicit instructions during the surgery, and a debriefing when it was over.

He published research about what became known as the B.I.D. method (Briefing, Interoperative teaching, Debriefing), and now it’s widely used in surgical training. To improve assessments of a resident’s performance in the operating room, he partnered with researchers from Harvard and Northwestern to create a smartphone app, SIMPL, to provide early feedback to the resident. His broader innovation—taking criticism and learning from it—is quintessential Dunnington.

“Most of the ideas I’ve had in surgical education were because I came back after a teaching session and said, ‘That did not work. I need to try something else.’ Or, a PhD educator was with me and said, ‘Have you ever thought of this?’” 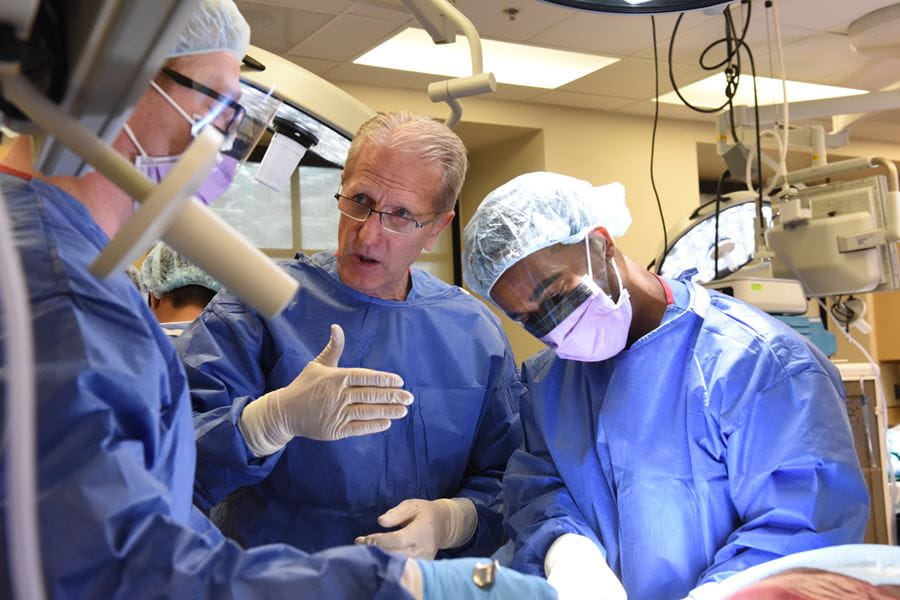 IN 1991, Dunnington moved to the University of Southern California and took charge of both the clerkship and residency programs. He was quickly visited by a respected urologist who brought a stinging complaint: Residents who’d spent a year in general surgery were still showing up in urology unable to tie a knot in the operating room. In the urologist’s words, they were unprepared. “He couldn’t have hit me harder if he had used a sledgehammer,” Dunnington said. He went on a mission to fix it.

Dunnington heard that the University of Toronto had begun training surgical residents in a simulated environment—a skills laboratory where they learned to tie knots, sew skin, and do procedures on cadavers rather than living patients. He visited to learn more, then took what he saw back to USC where, in 1992, he started one of the first surgical simulation centers in the United States. A few years later, at Southern Illinois University, he would establish another.

Studies have since shown that residents who experience surgical simulation perform better in the operating room—finishing procedures more quickly, with fewer errors, and reporting less stress.

As surgical education was still coming of age, it became clear that the people who run residency programs and clerkships needed more guidance. Dunnington and four other educators petitioned the American College of Surgeons to back a six-day immersive course in surgical education. It proved wildly popular, and Dunnington would serve as faculty in Surgeons as Educators for 15 years.

By 2012, Dunnington was comfortably ensconced as Chair of Surgery at Southern Illinois, a place he said was sometimes referred to as a Disneyland of surgical education. It was a small university partnering with a hospital CEO who was enthusiastic about spending what was needed to make it a premier medical education center. Because it was small, there were murmurs in academic circles that the Disneyland approach wouldn’t work at a big school.

About that time, IU Chair of Surgery Keith Lillemoe, MD, announced he was leaving for Massachusetts General Hospital. As he did, he sought out Dunnington with a question: “Gary, have you ever thought about coming home?” He had not. But the prospect of taking his ideas to the largest medical school in the country soon had Dunnington heading back to Indiana.

“When I came here in 2012, I felt I had something to prove,” Dunnington said. “This is home for me, and I wanted to leave a legacy from my time here.”

At both USC and Southern Illinois, Dunnington had started multi-disciplinary breast oncology centers. IU, with key support from the Vera Bradley Foundation for Breast Cancer, already had one that was humming. There was also an experienced breast cancer surgery team, which reduced his clinical burden.

UPON HIS ARRIVAL, Dunnington asked the 80 surgical residents why they had come to IU. Their response: IU’s overwhelming clinical volume meant they could see and do it all. Dunnington liked the answer but wanted to pair the high volume with a top-tier skills lab and a renewed emphasis on teaching.

IU’s surgical skills lab had been in a single small room with no simulators or other high-tech tools. Quickly, Dunnington established a first-class lab in the Van Nuys Medical Science Building. He even mixed in a new wrinkle—a mental skills curriculum that includes the coaching of a sports psychologist.

Beyond the skills lab, Dunnington injected the surgical department with a reminder about the joys of education. “He created a culture of being excited about being a teacher,” said Michael House, a professor of surgery and chief of surgical oncology.

That enthusiasm was reflected in the clerkships. Before Dunnington, medical students had ranked the surgery clerkship dead last among their experiences at IU. Four years after his arrival, in 2016, surgery was ranked first. It has remained near the top ever since.

“For all the right reasons, Gary chose to make medical education important at every level,” Wallach said. “He’s done it with grace and an enormous amount of caring and a good heart. He’s one in a million.”

Chandan Sen, who led the contingent from Ohio State that came to IU to establish the Indiana Center for Regenerative Medicine and Engineering, said Dunnington deserves credit for enabling the phenomenal growth of the department’s research. During Sen’s transition, Dunnington also helped smooth the rough spots. “First and foremost, what I noticed was that he is a perfect gentleman, a man of his word, and a man of spirit,” Sen said.

As to research in surgical education, Dunnington and his faculty have begun to shift the focus of surgical residencies from a fixed number of years to the mastering of key competencies. There’s work left for others to do, but Dunnington is proud of the progress his profession has made.

“I am absolutely convinced to my marrow that we produce a better surgeon today than we did in 1985 when I started,” he said.

If you would like to support an area important to Gary Dunnington, we invite you to contribute to the IU School of Medicine’s Resident Research Fund.