When Violet Refbord was born, glaucoma threatened to steal her vision. Her parents turned to pediatric ophthalmologists at Indiana University School of Medicine, where the latest advances in training and research have saved eyesight for five decades. 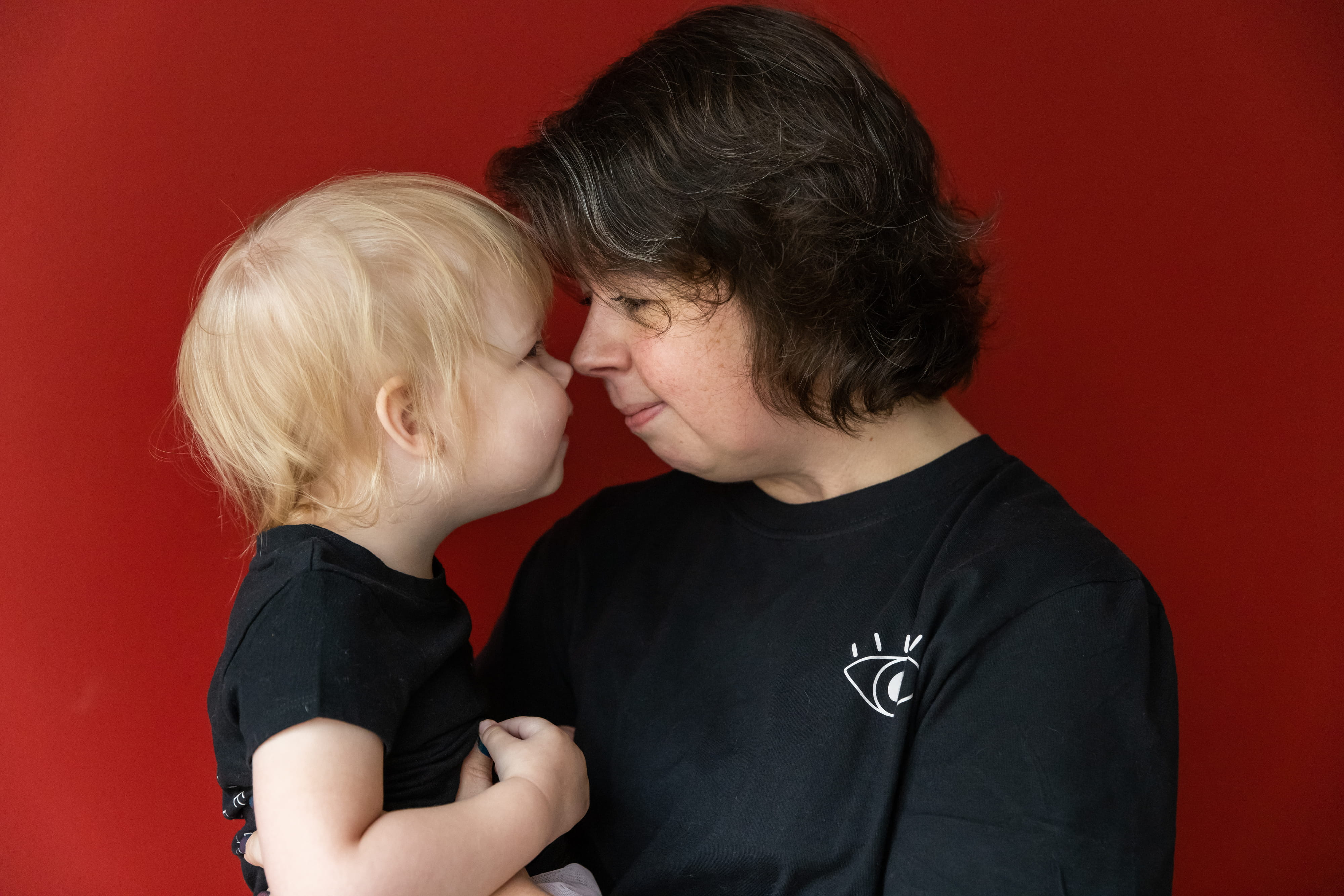 Ellen and Sean Refbord brought their daughter Violet, 2, to Indianapolis for treatment at Riley Hospital for Children at IU Health.

She wanted to look in her daughter’s eyes and know that she could look up, fix her gaze, and see the love in her mother’s face. Ellen wasn’t sure if that moment would ever come.

Violet Refbord was born in June 2019. All seemed routine until a pediatrician looked at Violet’s eyes. Her eyes were enlarged—and devoid of color. Her corneas were almost milky. When an ophthalmologist took a reading of the pressure inside Violet’s eyes, it was elevated.

The diagnosis: Violet had congenital glaucoma.

It’s a condition that affects one in 10,000 infants and produces stress on the optic nerve that, in some cases, leads to blindness. Ellen, a stay-at-home mom, and her husband, Sean, a union roofer, were soon referred to a suburban Chicago clinic, roughly an hour from their home in Valparaiso. But the office seemed untidy. It had a smell that lingered. The ophthalmologist seemed less than knowledgeable about Violet’s condition.

It took just one visit for Ellen to turn to Sean and declare that Violet needed to go to Riley Hospital for Children at IU Health.

WHEN IT COMES to the vision of their children, the Refbords are far from alone in turning to Riley and the pediatric ophthalmology program at Indiana University School of Medicine.

Since 1968, when it began with a single pediatric ophthalmologist, the section has grown to include eight ophthalmologists and four optometrists. Their specialties cross the panorama of eye conditions.

In 2020, the pediatric ophthalmology section conducted more than 20,000 outpatient visits. It runs one of the nation’s top fellowship programs. And it leverages its robust patient volume to serve as a vital research hub. Along the way, it’s nurtured a culture focused on patients like Violet.

“All of the people in our section are absolutely devoted to the kids and families they see,” said David A. Plager, MD, who is director of the Pediatric Section.

THE TREATMENT OF glaucoma, for lack of a better analogy, is like unclogging a drain—or installing one. The fluid inside your eye supplies its intricate structures with vital nutrients. When it’s done, that fluid needs to go somewhere. A network of cells and tissue helps it flow out into the circulatory system.

At Riley, Heather A. Smith, MD, an assistant professor of clinical medicine, put Violet under anesthesia and peered into her eyes. But the girl’s corneas were cloudy. So cloudy that Smith couldn’t see the optic nerve well enough to determine whether it was damaged.

The solution: perform microsurgery to open the canals. In Violet’s case, Smith made two attempts in each eye—all before Violet was two months old. None of them worked.

Usually, the next step is to install shunts—microscopic plastic tubing to carry away that excess fluid. But Violet was too small and, instead, underwent laser surgery to slowly decrease the amount of fluid the eye was producing.

At home, Ellen had to perform a daily ritual of placing drops in her daughter’s eyes to lower the pressure. Four or five times a day, Ellen found herself holding Violet as her daughter wailed from the sting in her eyes. When she tried an oral tablet alternative, the medicine wouldn’t stay down.

Through it all, Sean nudged his wife toward optimism. Ellen found respite in her family—and every so often reached into a box of Cosmic Brownies. “I ate too many,” she said. Always, her mind wandered to the worst-case scenario.

“What if my daughter never sees my face?” Ellen thought. “What if she doesn’t see a sunset?”

At 6 months old, Violet was big enough to have shunts implanted. And that’s when she gave her mother the moment she’d been waiting for.

As Ellen cradled her daughter, she looked down and grinned. And Violet returned the favor. Asked to describe that moment, Ellen comes quickly to one word.

Violet would need new shunts as she grew. By winter, when Violet was 18 months old, she was ready for XEN Gel shunts that were smaller and designed to split the difference creating a drainage canal and traditional tubing. With complications that required additional work. By summer, Violet underwent her 10th procedure—all in less than three years.

At a recent checkup, Smith got a clean look at the optic nerve in each of Violet’s eyes. It’s thinner than usual and slightly deteriorated, Ellen learned, but still intact. Ideally, the shunts will help ease potential stress, curbing the risk of blindness.

“They saved my child’s sight,” Ellen said. “That’s just incredible. I don’t know if I’ll ever be able to thank them enough for that.”

VIOLET WAS THE first child at IU to receive the XEN Gel shunts, Ellen said. And that gets at a core philosophy within the Department of Ophthalmology. “We do big-ticket items,” said Kathryn M. Haider, MD, who serves as Director of Clinical Research. “We look to explore treatments that affect a lot of kids, while also exploring treatments that make a major impact for kids with rare disorders.”

That includes several studies that explore dosing for drugs to halt the growth of abnormal blood vessels in the eyes of premature babies. Or ways to treat high myopia, which can lead to vision loss. Quite often, the research focuses on evaluating whether treatments used in adults are safe and effective in kids.

The Section of Pediatric Ophthalmology at IU School of Medicine is part of a clinical trial for an implant that slowly releases a steroid in patients after removing cataracts—one that could replace eye drops. “Putting eye drops in children who are two or three years old multiple times a day can be very challenging,” Haider said. “And for kids who have autism or Down syndrome, it’s almost impossible. This device could prevent post-op complications in these at-risk populations of children.”

The School of Medicine is known as an ideal site for large-scale trials. But it’s also at the forefront of translating the latest advances in radiology and genomics into the clinical setting.

IU is just one of a handful of centers in the United States where children battling retinoblastoma—an eye cancer that begins in the retina—can receive intraarterial chemotherapy. A catheter placed in the leg is threaded up through the blood vessels directly to the back of the eye where drugs are delivered directly to the tumor. It’s more targeted than traditional chemotherapy or radiation and spares the patient unwanted side effects.

Two years ago, Haider and Erin Conboy, MD, a medical and molecular geneticist, launched the Inherited Retinal Disease/Ocular Genetics Clinic, which diagnoses rare eye disorders and goes well beyond simply managing them. “Genetics is becoming a bigger and bigger slice of pharmacology and therapy,” Haider said. “We can offer these children and their families hope. That’s why we do this.”

Children referred to the Ocular Genetics Clinic are assessed for the function of light-sensitive cells in the eye, their visual field, and the ability to distinguish colors. A genetic counselor queries parents about family medical history.

After a simple cheek swab, the team can run a wide-panel DNA screen, which essentially is a spell-check of genomes associated with eye diseases. With this information, Conboy can learn more about the condition and sometimes predict conditions that may arise. So far, the clinics have identified the precise problematic genomes in roughly 55 percent of cases. Along with a battery of physical tests, Conboy consults with Haider to put together a genetic diagnosis.

The team also monitors databases that maintain lists of studies and clinical trials, with roughly 100 gene therapies at various stages of development. When the team spots a study or clinical trial that fits a patient, they look to get the patient enrolled.

“That’s a safety net and peace of mind for families,” Haider said. “We’re not just stumbling along. We’re trying to predict the future.”

FOR VIOLET, progress is evident in several ways.

Her irises are hazel and her eyes soak up the world. She adores books, is learning her colors, and points out the names of the animals she knows. When the Refbords walk outside, Violet can point out the blue car parked several houses down.

Violet’s been fitted for glasses that compensate for a high degree of nearsightedness. It’s a problem her mother embraces. “I don’t care if she has to wear Coke-bottle glasses. We’ll do it,” Ellen said. “All that matters is she can see what’s coming.”

To support training and research at IU School of Medicine that helps children see, contact Caitie Deranek Stewart at cderanek@iu.edu.