The research lab of Peter J. Roach, PhD is primarily focused on the metabolism of glycogen, its regulation, and the clinical consequences of its defects, as exhibited in glycogen storage diseases (glycogenoses). The approaches used include biochemical analysis of glycogen and related enzymes, genetically modified mouse lines, screening for inhibitors of glycogen accumulation in cells and, in collaboration with Thomas Hurley, PhD, analysis of relevant protein structures. 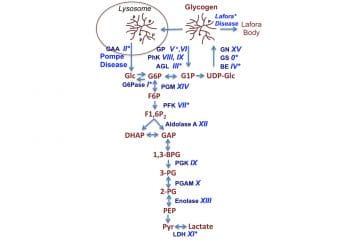 Glycogen is a branched polymer of glucose that acts as a reserve of glucosyl units, to be used for anabolism or as a source of energy. In mammals, the major deposits are skeletal muscle and liver, but glycogen is found in other tissues, including brain. In all tissues, it is believed to provide an energy buffer, laid down in times of nutritional plenty for utilization in times of need. Study of the enzymes of glycogen metabolism contributed much to the lab’s knowledge of enzyme regulation and signal transduction.

Genetic defects in a several genes, some known for decades and others discovered more recently, can lead to abnormalities in glycogen structure and/or accumulation. Usually, there is an over-accumulation of glycogen. Investigators in this lab are interested mainly in three of these glycogen storage diseases: Pompe Disease (GSD II), Cori Disease (GSD III) and Lafora disease. The Roach Lab has shown that genetic depletion of glycogen accumulation in mouse models of glycogenoses can correct pathological consequences of the aberrant glycogen storage. These results suggest a possible therapeutic approach to treat glycogenoses: suppress glycogen accumulation in tissues. 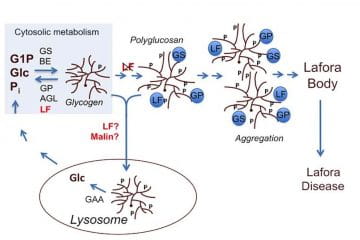 Mutations in either of two genes, EPM2A or EPM2B, cause almost all cases of Lafora Disease. The genes encode respectively laforin, a glycogen binding protein with dual-specificity phosphase activity, and malin, an E3 ubiquitin ligase. Their functions are not well-understood. However, mutation of either leads to a very similar disease in which glycogen structure is defective, being less branched, less soluble and more phosphorylated. Part of the research program in the Roach Lab seeks to understand the functions of laforin and malin.

Because genetic depletion of glycogen in mice can ameliorate symptoms of glycogenoses, the Roach Lab scientists developed a program to search for small molecules that could suppress glycogen storage. Attention is directed to inhibitors of the synthetic enzyme glycogen synthase or its activating protein phosphase (PP1/PTG). The lab developed assays for high and medium throughput screening and has analyzed close to 80,000 compounds from available chemical libraries. This group of scientists have several leads whose properties they are attempting to refine.

A full listing of publications by Peter Roach, PhD, is available on PubMed.