Here, we look at the significant contributions of women who are leading efforts in the field of Alzheimer’s disease, one of the critical areas of focus identified by IU School of Medicine leadership for developing expertise.

“It’s the time to be studying Alzheimer’s disease—funding is unprecedented,” said Liana Apostolova, MD, a Distinguished Professor and Baekgaard Professor of Alzheimer’s Disease Research at IU School of Medicine.

She leads the school’s top-funded research program in a record-setting year for National Institutes of Health (NIH) support. IU School of Medicine ranks fifth among all U.S. medical schools for funding related to Alzheimer’s and dementia. 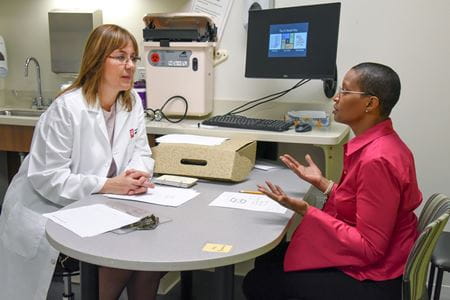 Apostolova secured the initial grant to launch the Longitudinal Early-Onset Alzheimer’s Disease Study (LEADS) four years ago with a vision to study how the disease manifests in people who become cognitively impaired earlier in life at ages 40-64.

“Dr. Apostolova has brought together leading academic investigators from around the U.S. and beyond to collaborate on these studies,” said Andrew Saykin, PsyD, director of the Center for Neuroimaging and of the Indiana Alzheimer’s Disease Research Center at IU School of Medicine. “I suspect Liana and her team will discover novel genetic variants through this investigation, as enhanced genetic risk is often reflected by earlier age of onset of symptoms.”

Over the last decade, NIH funding for Alzheimer’s and dementia research has rocketed, from $448 million in 2011 to $3.1 billion in 2021—a 700 percent increase. The prioritization of government funding is largely due to the aging Baby Boomer population—all of whom will be over age 65 by 2030. According to Alzheimer’s Association data, one in nine Americans age 65 and older has Alzheimer’s disease. By mid-century, the affected population is projected to grow to about 13 million.

IU School of Medicine is home to one of the nation’s oldest Alzheimer’s research centers. Founded in 1991, the Indiana Alzheimer’s Disease Research Center (IADRC) is one of just 32 such centers designated by the National Institute on Aging (NIA), a division of the NIH.

Apostolova leads the clinical core for the IADRC, which recruits and carefully evaluates study participants with the goal to provide researchers with high-quality clinical, imaging, biomarker and neuropathological data in Alzheimer’s disease and hereditary dementias and to improve early detection. She is among six women who lead or co-lead service cores within the IADRC.

“We take pride in the ensemble of extraordinary women in scientific leadership positions within our center,” Saykin said. 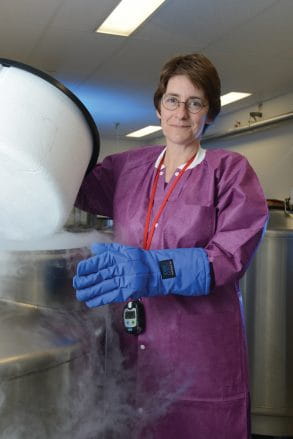 Tatiana Foroud, PhD, directs the Genetics, Biomarker and Bioinformatics Core and has been involved in dementia research since the mid-1990s. In 2003, she became principal investigator for the nation’s largest biobank for Alzheimer’s, the National Centralized Repository for Alzheimer’s Disease Samples (NCRAD), which she describes as the “Amazon” for DNA, cerebrospinal fluid, brain tissue and other biospecimens used in laboratories studying Alzheimer’s disease.

“About a decade ago, Alzheimer’s centers across the nation realized it’s important to coordinate and collaborate, and it became apparent we needed a way to share resources. Tatiana has led efforts in the country, and maybe the world, to do that,” said Bruce Lamb, PhD, another longtime Alzheimer’s researcher who serves as director of the Stark Neurosciences Research Institute and is the Roberts Family Professor of Alzheimer’s Disease Research at IU School of Medicine.

Lamb is responsible for recruiting another woman scientist, Adrian Oblak, PhD, to help him lead Model Organism Development and Evaluation for Late-Onset Alzheimer’s Disease (MODEL-AD), a collaboration with The Jackson Laboratory, Sage Bionetworks, University of Pittsburgh School of Medicine and the University of California-Irvine, working to develop new animal models for research in late-onset Alzheimer’s disease—a priority of the NIA.

“This is a huge program with multiple institutions involved and multiple principal investigators. Adrian has been critical to keeping things organized, and she’s actually doing some of her own research as well,” Lamb said. “Early-career investigators like Adrian are helping to lead these important programs.”

Shannon Risacher, PhD, is another IU scientist often identified as a “rising star” by her colleagues in Alzheimer’s research. She recently took over leadership of the IADRC’s Neuroimaging Core from Saykin.

“As my main scientific mentor, Dr. Saykin has taught me the importance of being open-minded about new ideas and asking questions about everything. Too often researchers can get stuck inside a silo and not consider other fields, technologies or perspectives,” said Risacher, assistant professor of radiology and imaging sciences at IU School of Medicine. “With complex human diseases like Alzheimer’s, a single cure is unlikely and certainly will not fit into a single domain but instead will be multi-faceted and overlap many fields. Working together can help everyone get ahead.”

Risacher considers both Foroud and Apostolova to be role models as trailblazers in Alzheimer’s research.

“They are both involved in so many projects and come up with so many ideas that I don’t know how they have the hours in the day to sleep also!” Risacher said. “I hope to follow in their incredible footsteps.”

Kelly Nudelman, PhD, is another early-career scientist at IU School of Medicine who lists Apostolova and Foroud, as well as Saykin, among her mentors. An assistant professor of medical and molecular genetics, Nudelman works with Apostolova on the LEADS study and with Foroud to co-lead the IADRC’s Genetics, Biomarker and Biospecimen Core.

“Dr. Foroud has been a constant inspiration for the past few years and has taught me so much about how to run a successful biorepository, as well as giving me a new appreciation for the importance of organization and planning in any scientific endeavor,” she said.

30 years of women in Alzheimer’s research

Since the Alzheimer center’s founding 30 years ago, women have been making significant contributions to Alzheimer’s research at IU School of Medicine. Mary Austrom, PhD, who passed away in October 2019, was founding leader of the IADRC’s outreach, recruitment and education core.

“She was a renowned leader in Alzheimer’s education and community engagement,” Saykin said. “Dr. Austrom also served as associate dean of diversity affairs at IU School of Medicine and was highly instrumental in helping us maximize participation of African American and other underrepresented groups in Alzheimer’s disease research and related programs.”

“The top priority of the Outreach, Recruitment and Engagement Core is to engage the African American, Black and Hispanic communities in Indiana, who are two-to-three times more likely to develop Alzheimer’s disease and other dementias compared to whites. By collaborating with our Community Advisory Board, we are raising awareness of these health disparities and engaging these communities in a dialogue about the importance of racial and ethnic diversity in our center’s research participants,” said Wang, assistant professor of clinical psychiatry.

“Dr. Gao is one the most knowledgeable scholars regarding analysis of complex longitudinal data sets in aging and Alzheimer’s research,” Saykin said. “She also is principal investigator of her own NIH-funded grants, including international studies of dementia.”

Medical physicist Yu-Chien Wu, MD, PhD, serves as scientific director of the In-Vivo Imaging Core for the Indiana Institute for Biomedical Imaging Sciences and is an expert in magnetic resonance imaging (MRI) and positron emission tomography (PET) technology. Her lab studies the use of diffusion-based imaging in Alzheimer’s, traumatic brain injury and concussion.

“A couple years ago, IU School of Medicine secured funds to get sophisticated animal imaging—PET/MRI—one of just two in North America. Yu-Chien is the leader of this new imaging facility, and she’s been fantastic,” Lamb said.

One of the Alzheimer center’s newest recruits is Kathy Newell, MD, who co-directs the Neuropathology Core with IADRC co-founder Bernardino Ghetti, MD.

Like Apostolova and several other Alzheimer’s researchers, Newell’s recruitment was supported by an endowment; she is the Jay C. and Lucile Kahn Professor of Alzheimer’s Disease Research and Education.

About 10 years ago, IU School of Medicine leadership designated Alzheimer’s and neurodegeneration as a critical area of expertise to develop, and that institutional support has proved vital in making IU a leader in this field.

“The war on Alzheimer’s disease seems to be one of the few areas of bipartisan agreement in the federal government, which has generously invested in research to find a cure,” Saykin noted. “However, to be in a position to take advantage of funding opportunities, an institution has to invest. The strong support of Dean Jay Hess and other senior leaders has been a key factor in IU’s success.” 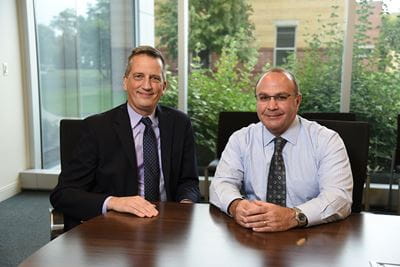 Saykin is co-director of a nationwide, NIH-funded effort to develop artificial intelligence (AI) methods for advancement in Alzheimer’s. In 2019, IU was awarded a $36 million NIH grant to launch a new drug discovery center for Alzheimer’s in partnership with Purdue University, known as TREAT-AD, co-directed by Lamb and Alan Palkowitz, PhD.

While many exciting discoveries are being made—including a potential “breakthrough” experimental drug found to be highly effective in a recent clinical trial—there are still more questions than answers about the development of Alzheimer’s and how to treat it. Lamb said he’s encouraged by the “next generation” of Alzheimer’s researchers rising up at IU School of Medicine, particularly women scientists currently developing their niches and expertise.

With each new discovery, the medical community gets closer to the ultimate goal of preventing Alzheimer’s disease.

“Our scientific theme going forward is precision medicine for Alzheimer’s disease—easy to state but a great challenge for the field—where our goal must be to harness complexity, distill the informative features of the disease without oversimplifying, and turn the results into actionable, personalized therapeutic strategies,” Saykin said. “We have an extraordinary team, and I am optimistic we will achieve these goals.