Off Duty with Melissa Cavaghan, MD: a virtual violinist On June 24, the National Virtual Medical Orchestra (NVMO) released its debut recording: a video of 61 musicians from all over the country playing a Beethoven symphony together, but separately.

One of them was Melissa Cavaghan, MD, a violinist, endocrinologist and associate professor of clinical medicine at IU School of Medicine. A longtime member of the IU School of Medicine Orchestra, Cavaghan said that the NVMO was organized by directors of other medical orchestras around the country.

“Because of the pandemic, we’ve all had to give up playing in person, so the directors stepped up to organize the virtual group. We’ve never even met in person, let alone rehearsed together,” said Cavaghan, who is Service Line Leader for Endocrinology and Metabolism at IU Health, as well as Medical Director for University Hospital’s Medical Diagnostic Clinic.

For Cavaghan, who normally relishes playing music with others, participating in the virtual venture was an unusual challenge.

“When you’re playing in an orchestra, it’s really important to blend in with the other musicians around you, and pay attention to the conductor’s cues for changes in tempo and expression,” she said. “When you aren’t playing live, you don’t get those cues, so it’s incredibly challenging.”

To help guide the musicians as they recorded themselves playing, the NVMO conductor sent them each a backing track, a tempo track, and a video of himself conducting the piece.

“It was a bit stressful to sit down to do the recording, but it was also really rewarding,” said Cavaghan. “This gets me doing something that, at my core, I love to do, so I’m really thankful.”

Cavaghan began playing the violin at age eight because a friend of hers did, too. She quickly fell in love with the instrument, which she said is “incredibly expressive—almost as expressive as the human voice.” 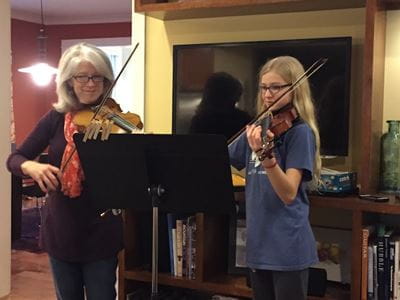 Over the years, Cavaghan has continued to play with intermittent focus (with a total pause during medical school, she says). These days, she’s motivated by her 17-year-old daughter, who also plays the violin.

“I didn’t play regularly for many years, but my daughter has helped me practice,” Cavaghan said. “She’s really good, and we play together now, which is wonderful.”

Cavaghan, who also plays the piano, says that many people in health and science careers have a strong interest in music—even if they don’t have much time to play.

“We’re creatures of obligation, and the things that we like or love to do are often last on the list,” she said.

Nonetheless, she thinks that creative and artistic pursuits can feed a physician’s soul—and make them more empathetic. For instance, she says that she often treats people with diabetes whose illness prevents them from doing things they love, and in some ways, Cavaghan can relate.

“In clinical medicine, we talk about treating the whole person,” she said, and physicians should remember that they’re “whole people,” too.

“Reminders of nurturing pursuits that you’ve missed, or are trying to maintain, always help you be a better physician,” Cavaghan said.

More like this:
Off Duty with Cary Mariash, MD: A pilot for pups