Off Duty with Cary Mariash, MD: A pilot for pups 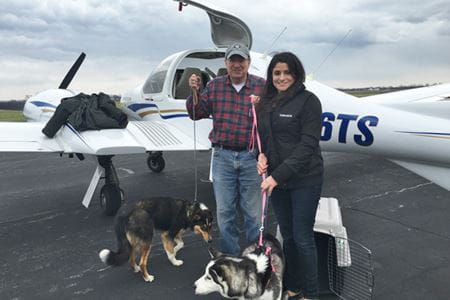 In 1992, Cary Mariash, MD, picked up a new hobby. Like many people with high-pressure jobs, his hobby helped take his mind off work. But, unlike most, Mariash chose not to pursue something conventionally relaxing, like gardening or yoga.

Flying planes “totally took me over,” says Mariash, who is Medical Director of Enterprise Clinical Research Operations and a Professor of Clinical Medicine in the Division of Endocrinology.

Since he began, Mariash has owned several planes and clocked about 2,300 hours of flying time. As a former Minnesotan, he earned many of those hours as a volunteer Angel Flight pilot transporting patients to and from appointments at the Mayo Clinic.

When he moved to Indiana about ten years ago, he found that there wasn’t much demand here for Angel Flight services. In search of a new way to donate his time and skills, he learned there was another population who needed his help getting from place to place.

Pilots N Paws is a national organization that facilitates the transport of rescue animals, usually dogs. Mariash signed on as a volunteer pilot, and to date, he’s flown about 200 dogs to their new homes.

He says that for the most part, he flies them relatively short distances of about 200 miles or so. 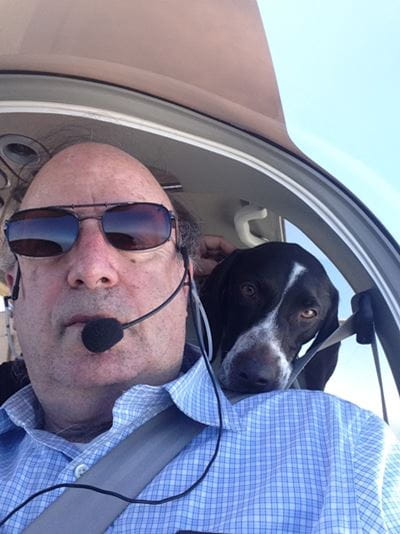 Sometimes, these flights are short legs on a longer journey. On one notable occasion, Mariash was part of a cross-country team of 7-10 pilots that flew a retired bomb-sniffing dog who had served in Afghanistan from San Diego to New York.

According to Mariash, transporting these unusual passengers is not especially difficult.

“With rare exceptions, almost every one of them has fallen asleep,” he says.

Flying with dogs does come with some unique challenges, however.

“Sometimes a dog will get sick, or get out of its crate and start running around the plane—which is not ideal.”

Additionally, decreased air pressure can lead to the release of certain unpleasant “odors,” which can be a problem in the plane’s close quarters, he says.

When he isn’t piloting pups, Mariash also enjoys his human-only flights. He says he doesn’t have a favorite route, but he has flown all over the US, including a trip around Alaska in 2013. He chronicled the adventure for family and friends in a daily blog.

When asked about the relationship between medicine and his love of aviation, he says there’s no connection—except that flying helps him to be a better physician.

“Even though flying can be stressful and time consuming, it is also, in its way, very relaxing, and it allows me to perform when I come back to work,” he says.