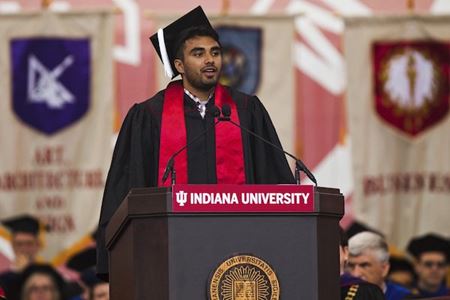 Lauren Henninger grew up in a working class community on the south side of Chicago. Her mom worked at a department store; her dad worked in maintenance at a manufacturing plant.

“College was never a conversation that was in my house,” she said.

Now Henninger holds a master’s degree in student affairs administration and is a lead advisor at Indiana University School of Medicine. She has a special place in her heart for helping first-generation students—those whose parents did not have college degrees.

About 9 percent of IU medical students identify as “first gen.” If they felt out of place as undergrads, it’s even less common to come from an uneducated family in medical school. Now there’s a way for first-gen med students to connect.

Inspired by an Association of American Medical Colleges (AAMC) conference session on supporting first-generation students, Henninger spearheaded the effort to form the First Generation Committee at IU School of Medicine in 2018 with support from Emily Walvoord, MD, associate dean for student affairs, and the help of several first-gen medical students. The committee aims to foster a network of IU School of Medicine students, faculty and staff who identify as first-generation.

That’s important for students who often struggle with “imposter syndrome,” when a person feels self-doubt and personal incompetence despite their education, experience and accomplishments.

Henninger, Messmore and other colleagues who identify as first-gen assure these students they not only belong at IU School of Medicine, but also bring unique strengths.

First-gen students are known to be inquisitive, persistent, hard-working and empathetic.

“I love my identity of being first-generation because it shows I am resilient,” said Aonesti Williams, a second-year medical student and First Generation Committee co-president. 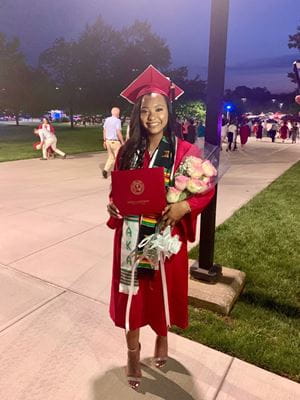 She grew up in Columbus, Ohio, primarily living with her mother, who worked long hours in a hair salon. The only person in her extended family with a college degree was an aunt who was in social work.

“She was the most influential person for me in wanting to get an education,” Williams said. “My family was below the poverty line, and we struggled a lot with our finances. For me, I saw what I didn’t want for myself.”

At her high school, Williams was mentored by the leader of a program for disadvantaged students who walked her through the process of applying for college and federal financial aid.

“I didn’t know a lot of people in school or have friends who wanted to go to college,” Williams said. “Miss Jackie took me under her wing and took me to a college visit day at Miami of Ohio. She was the only reason I went to college there. I really owe a lot of my success to this person and this program that saw potential in me.”

In college, Williams decided to follow a premed track, majoring in biology and neuroscience. During her senior year, she applied to medical school but did not immediately gain admission; she realized she needed to improve her score on the Medical College Admission Test (MCAT). Her advisor at Miami University (Ohio) connected her to Walvoord, who earned her bachelor’s degree from Miami. 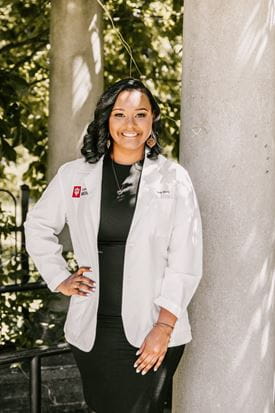 Walvoord introduced Williams to the Master of Science in Medical Science (MSMS) program at IU School of Medicine, a two-year program designed to help prepare students who come from backgrounds underrepresented in medicine to succeed in medical school. Williams credits the MSMS program with giving her the confidence that she was capable of becoming a successful physician.

“First-gen students are very curious. We always have to ask questions and look things up and do research,” she said. “And first-generation students have a lot of gratitude for people who help get us to this point. We realize not everybody makes it to medical school.”

Eashan Kumar, who serves as co-president of the First Generation Committee with Williams, said first-gen students are resilient and empathetic.

“We don’t live in that bubble where we think everyone around us has gone to college,” he said. “Because so much of medicine is connecting with patients and creating trust, my background helps me identify with many patients.”

Kumar’s parents immigrated from India. His mother had some college training and worked as a nuclear medicine technician but never finished a degree. His father made a good living in the construction industry and retail management despite not having a college education.

Unlike Williams, Kumar lived and went to school in an upper middle class community and was surrounded by peers who had parents with advanced degrees. He never questioned whether he would go to college, but navigating how to get there meant seeking out his own resources and mentors.

As an undergraduate student at Indiana University, Kumar connected with older students who went on to IU School of Medicine. They helped him figure out which courses to take and how to build a successful medical school application.

“Medicine has historically been an inaccessible career path for a lot of people who don’t have family connections to it,” Kumar said. “It is important to foster those social capital connections and develop a social support system for first-generation students.”

The First Generation Committee aims to do that through statewide social mixers (held virtually during the pandemic) and by publicly celebrating the accomplishments of all members of the IU School of Medicine community who identify as first-gen.

First-gen students share their stories during a “takeover” of the medical school’s Instagram feed annually on First-Generation Celebration Day—November 8. The committee also created and distributed First Gen pins for faculty and staff to wear so they can be easily identified by first-generation students seeking to build their support network.

“It’s this sense of ability and uplifting others as we all navigate this life. I didn’t have that support when I was going through college,” Messmore said.

Her first-gen experience intersected with poverty, which is common among first-generation students. They often feel they are “straddling two worlds,” Messmore said.

While incoming first-generation medical students often struggle with all of the medical terminology and “insider” acronyms early in their training, they thrive when they get into the clinic during their third and fourth years of medical school, Henninger said. 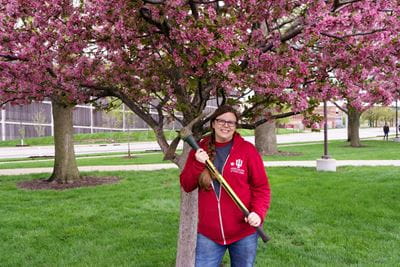 “They know what it is to work hard and have a boss, and they know how to interact with people and will ask for feedback,” she said.

Henninger and Messmore encourage first-gen students not to see their life experiences as deficits but rather as cultural wealth they are bringing to the medical profession.

“Because medicine has many issues in health care disparities, it will only get better if we have more people coming into medical school who carry those backgrounds that help them relate,” Messmore said. “Their lived experience makes them more empathetic as physicians.”

Are you a first-generation medical student or mentor? Check out these Tools and Resources for First-Generation Medical School Students from the Association of American Medical Colleges.

To find out how you can get involved in the First Generation Committee at IU School of Medicine, contact co-advisors Lauren Henninger or Niki Messmore.