Growing up as the only girl in a family with four brothers, Uchechukwu Emili has always taken it as a challenge when someone told her she couldn’t do what the boys were doing. She was a track and field athlete at Loyola University Maryland, competing in shot put and discus, and she took up boxing in medical school.

“There wasn’t much that my brothers did that I couldn’t do—and I challenge you that I probably did it better!” said Emili, a Nigerian American born in the Bronx who goes by “Uche” (pronounced oo-chay), a fitting name that means “intention” or “will.”

Emili’s familial experiences turned out to be the perfect training ground for her future career in orthopedic surgery, the least diverse of any medical specialty with just 6.5 percent of practicing orthopedic surgeons being female and less than 2 percent Black. As Emili graduates from Indiana University School of Medicine on May 13, 2022, she will start the next phase of her training at Ohio State University in a residency program where she will be the only woman in her cohort.

And she is not intimidated.

“Anytime somebody said, ‘You’re not the type of person who can do this,’ that has always been a challenge to me,” said Emili. “If it’s something I’m truly interested in, just because you have some misconstrued notion that women or Black people can’t do this, alright, let’s see!”

Setting her course in medicine

Emili has known since high school that she wanted to be an orthopedic surgeon—long before she realized how lacking the field is in diversity.

Her first mentor in medicine was her father, who had to start over as a physician when the family immigrated to New York in the early 1990s. Emili said she gained new respect for his perseverance after studying for her own medical licensing exams.

“I appreciate the hard work it took to do all of that while being in a new country, learning a new language and trying to assimilate quickly,” said Emili, who was born shortly after her parents immigrated. “He became a resident at a hospital in New York and rose through the ranks to associate residency program director.”

People have always told her she’s just like her dad, an internal medicine physician who specializes in pain and palliative care. Her mother is a nurse, so she had early exposure to health care careers. But it was her grandma who inspired Emili to go into orthopedic surgery.

“When I was little, whenever she came from Nigeria to stay with us, I was attached at the hip,” Emili said. “I love her so much!”

It was devastating when her grandma developed debilitating arthritis in both knees making it extremely difficult to walk.

“For daily life in Nigeria, mobility is very important, and she was the major caregiver for the rest of our family there,” Emili explained.

Her parents brought her grandmother to the United States for surgery and physical therapy, so Emili was able to witness her beloved grandma’s healing.

“Seeing that transformation to her getting back to moving, walking and dancing was incredible,” Emili recalled. “I didn’t know doctors could do this. Seeing that dramatic change for my grandma is where orthopedics started for me.”

Emili’s mentors warned her: “Ortho is still a progressive field. You can’t be surprised if you are the only female or only underrepresented-in-medicine individual.”

IU School of Medicine is working hard to develop more interest and train more orthopedists from diverse backgrounds, said Walter Virkus, MD, who has served as Emili’s mentor in the field throughout her time in medical school. “There is a national effort through the American Academy of Orthopaedic Surgeons, as well as a concerted effort here at IU School of Medicine to provide a welcoming environment for these groups, as well as an effort to recruit women and minorities to our department,” said Virkus, a professor in the Department of Orthopaedic Surgery. “We were successful in this year’s match, filling four of our six positions with women.”

In this year’s graduating class, Emili is among 13 IU School of Medicine students who matched to ortho residency programs throughout the nation—five are female. These women have supported one another throughout their final year of medical education, especially through the application process for the National Resident Matching Program.

“It’s nice to have the support of family, friends and mentors, but no one understands exactly what you’re going through the way a fellow applicant does,” said Priyanka Ghosh, the only one of the group who will stay at IU for residency.

She met Emili during their ortho rotation at Eskenazi Hospital and deepened the friendship when both did an away rotation in New York City.

“I can’t say enough about how supportive Uche is. She was there for the highs, the lows, the doubts, the second opinions, the venting sessions, the funny stories and more,” Ghosh said. “Ortho is a small world, even more so amongst women in the field. We will always be there to support one another! I could not be more proud of Uche and excited to embark on this journey as colleagues.” Virkus encouraged Emili to aggressively pursue the highest quality residency programs in the country, convinced she was a strong candidate who was not only smart and well-prepared but also had the grit it would take to be a trailblazer for women and minorities in the field.

“He gave me my first ortho research project. He believed in me, he made calls for me, and he was always real with me,” Emili said. “He was a sounding board and my No. 1 supporter when applying for away rotations and making up my mind for rank order of residency programs.”

While Virkus’ support was phenomenal, Emili also sought out mentors who look like her. Using #MedTwitter on social media, she connected with Black women in orthopedic surgery including Alexis Gaskin, MD, in California, and Kessiena Aya, DO, MSc, in Minnesota.

“To have that support from someone who has literally been in my shoes was an incredible thing,” Emili said.

It’s important for her to encourage the next generation of aspiring physicians from communities underrepresented in medicine. During her time as a student at IU School of Medicine-Fort Wayne, Emili joined the diversity committee and volunteered as a mentor for minority high school students. 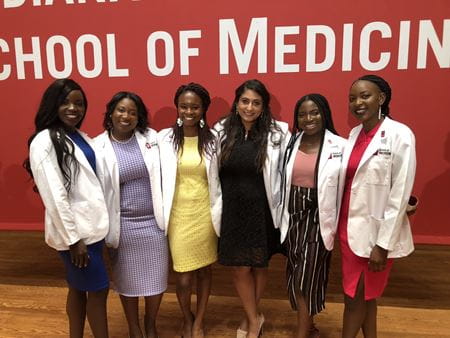 She is honored to be chosen as the MD student speaker for the 2022 IU School of Medicine Graduate Recognition ceremony and said she wants to recognize the “millions of ways” her classmates have gone out into their communities to serve, particularly during the pandemic.

“We’re the only class that did their whole clinical experiences through COVID, and we could’ve been the class that made it all about us,” Emili said. “But I think we dealt with it with as much grace as we possibly could have—and we came out stronger for it. We’re even more resolute in our calling to be doctors now.”

Not only that, but the Class of 2022 is exceptionally service-minded. Whether volunteering in student outreach clinics, organizing blood drives, lending their voices to racial justice initiatives or myriad other ways, this year’s graduates have made a difference, she said.

“We have all picked those things that are close to our hearts—things we want to fight for—and we have created spaces to help and serve in those areas,” said Emili. “That’s the kind of class and the colleagues I have—that’s the kind of family IU has given me. And that’s what’s needed in the world.”