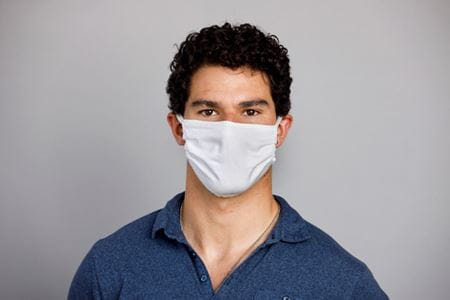 A few months ago, Sean Buehler would not have dreamed he would be serving as director of an isolation shelter for homeless people exhibiting symptoms of COVID-19, serving a six-county area.

Buehler started volunteering with Shalom Community Center in Bloomington as an undergrad student; now a student Indiana University School of Medicine, he serves at the shelter’s free health clinics. His unique background—a bachelor’s degree in public health and current research work in biocontainment for infectious diseases—made him especially qualified to step up when someone was needed to help open and run an isolation shelter.

“I sort of just fell into the role organically,” said Buehler. “I was helping Shalom, as well as other shelters in town, to develop their COVID response using some of the knowledge I gained from both IU School of Medicine studies and my research in biocontainment.”

At first, there was a warehouse space on the south side of town with 40 beds donated by Indiana University Surplus Stores. Then the shelter got a client with COVID-19 symptoms who also had numerous comorbidities and needed 24-hour managed care. Buehler and others made dozens of phone calls before getting the patient admitted to IU Health Methodist Hospital in Indianapolis.

“What that taught us was we couldn’t use that warehouse as an isolation space. It was pretty much impossible to maintain infection control,” Buehler said.

As he was urgently working to improve protocols, a call to Indiana Family and Social Services Administration (FSSA) led to an offer for Shalom to receive a $750,000 grant to open an isolation shelter for the homeless in the region serving Monroe, Morgan, Martin, Greene, Lawrence and Owen counties.

“Things kind of hit 1,000 miles an hour from that point,” Buehler said. “I sat for 10 hours a day for five days straight and developed procedures and protocols.”

He now serves as director of a converted Travel Lodge motel on Bloomington’s west side, providing a place for quarantining people with COVID-19 symptoms who have nowhere else to go. 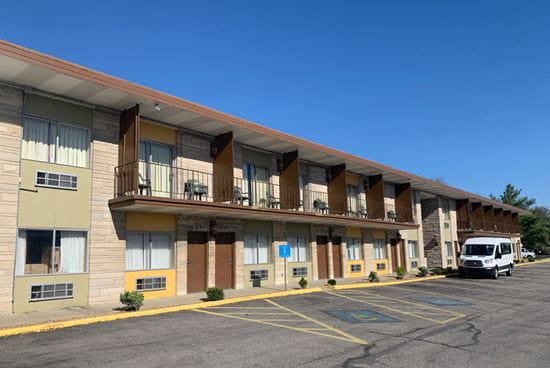 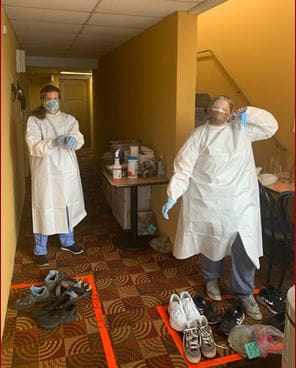 “We are concerned it won’t take a lot to spike an outbreak in the homeless community here because our shelters are so densely packed,” Buehler said. “We could become very needed very quickly.”

Shalom has funds to lease the motel for up to three months; Buehler plans to transition back to being a full-time medical student as summer closes and coursework resumes.

“I haven’t studied for my board exam in five weeks, but all these life skills I’m learning now are priceless,” he said.

03/18/2021 Update: Sean Buehler was awarded the 2021 Excellence in Public Health Award from the United States Public Health Service Physician Professional Advisory Committee (USPHS). This award recognizes medical students across the country who advance public health and exemplify the USPHS’ mission to protect, promote and advance the health and safety of the nation. Buehler was recognized for his work as founding director of the Monroe County Isolation Shelter, which provides safe shelter for members of the homeless population, group homes and those recovering from substance use disorder in southern Indiana who have either been exposed to or tested positive for COVID-19. In addition, he volunteered for five years at Volunteers in Medicine of Monroe County and serves on the board of the Shalom Community Center in Bloomington.

Matthew Logsdon also hasn’t had much time to study lately. Not only is he a full-time medical student, but he also holds an MBA from Notre Dame and runs the distillery at Indiana Whiskey Co., where he serves as vice president.

During the COVID-19 crisis, the South Bend distillery temporarily stopped producing its award-winning, small-batch whiskeys and instead began making hand sanitizer for essential workers like grocery store clerks, mail carriers and first responders, as well as caregivers and anyone else who needed it.

“For about four weeks, we totally shut down with whiskey making and were cranking out sanitizer,” Logsdon said. 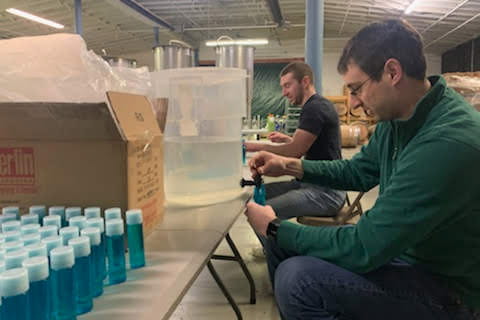 It all began mid-March with a joint request from the Food and Drug Administration (FDA) and the Alcohol and Tobacco Tax and Trade Bureau. Anyone with a distilled spirits permit was asked to consider making hand sanitizer. Distilleries were particularly equipped for this task because they’re already licensed to produce high-proof alcohol products, and they have retail and packaging partners in local communities.

Still, Indiana Whiskey had to shift operations quickly to produce and distribute a brand new product.

“We got everything together in seven days, which is pretty crazy,” Logsdon said, noting Maverick Packaging in Elkhart partnered in the effort.

Martin’s Super Markets made an initial order of 25,000 bottles and was willing to pay market price so first responders like EMTs and police officers could get sanitizer for free. Local postmasters also were eager to get sanitizer for postal carriers throughout the region.

Indiana Whiskey gave one free bottle of hand sanitizer to anyone in the community who needed it, no questions asked.

“A lot of people needed sanitizer for personal reasons, and they weren’t able to find it. It caused some initial anxiety,” said Logsdon. One note of gratitude came in from a mother taking care of her special-needs son; another from a woman caring for her homebound mother.

Indiana Whiskey was careful to keep volunteers safe by social distancing, and the students enjoyed the opportunity to interact while helping in the fight against COVID-19, Logsdon said. As a bonus, every third shift got some whiskey!

During the 4.5-week run of hand sanitizer operations, Indiana Whiskey produced and distributed about 7,000 gallons—five times the typical production rate for whiskey.

“The volunteerism surrounding this project has been absolutely extraordinary,” Florance said.