Lifelong friends come together in support of breast cancer research 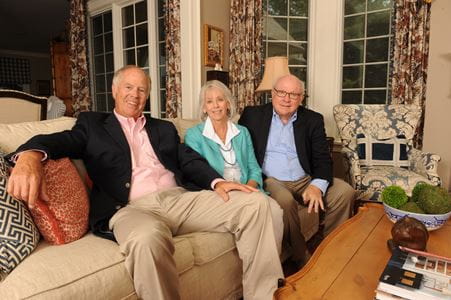 Spike Abernethy remembers his wife’s love of their three daughters and her joy at being a grandmother. He remembers her love of history, and how she worked to restore a farmhouse that had been in his family since Indiana’s frontier days.

He also remembers how hard Anne fought, for 5½ years, against a breast cancer she wouldn’t beat, but also how she took comfort during her battle from a picture she kept on her dresser.

It was a picture of the researchers at the Indiana University School of Medicine, led by Milan Radovich, PhD. She’d met them, seen their labs and knew they were working on her behalf to find a treatment.

“Every day, even though she had pain or another chemo treatment, it gave her that sense of hope knowing that there are people out there working long hours to try and come up with a solution to what she was dealing with,” said Spike Abernethy, Anne’s husband of 35 years.

But the disease which had afflicted Anne, triple-negative breast cancer, was a particularly aggressive and stubborn form of breast cancer that continues to elude a cure, despite advances. For a time, treatments sent Anne’s disease into remission, and extended her life long enough to see new grandchildren born and to allow her and Spike to travel the world. But the disease kept coming back.

Eventually, it became clear that no miracle would come in time for Anne. Still, Spike says Anne wanted other women—who would face breast cancer after her—to have a better chance. She and Spike became members of the IU Simon Cancer Center Development Board, which helps raise money for cancer research at IU School of Medicine. They gave generously and raised money in their South Bend community for research.

Anne died in 2013. Five years after her passing, Spike continues the work. He remains a member of the cancer center board. He’s active with 100 Voices of Hope, a breast cancer research support group. He’s made room for a sizable gift to support triple negative breast cancer research in his estate plan. Moreover, he tells his wife’s story where it will have an impact. And when people come to him with stories of their own breast cancer diagnosis, he links them with experts at IU School of Medicine.

Above all, he’s working to fight this scourge not just for Anne but for his three daughters, and his granddaughters.

Helping Spike in the effort—and supporting him through the aftermath of losing Anne—are Mick and Kathy Tuesley, a couple whose friendship Spike and Anne enjoyed for more than 40 years.

Kathy Tuesley won her own battle with breast cancer, a different form than Anne’s which she was able to beat back after surgery and chemotherapy. But the pain from losing her dear friend—and other women close to her—still remains close to the surface for Kathy. Like Spike, she and Mick began supporting breast cancer research at IU when Anne was in treatment, and they continue today. They want the research to go forward for future generations as well.

When word was announced about the new center—and the Vera Bradley Foundation’s latest $2.5 million gift to research—Spike Abernethy was heartened that one of the key private funders in the fight against breast cancer was taking their support to a new level.

“They are a leader and I hope others will continue to follow their example, in smaller ways,” Abernethy said. “But every bit of help is necessary to try to win this battle.”