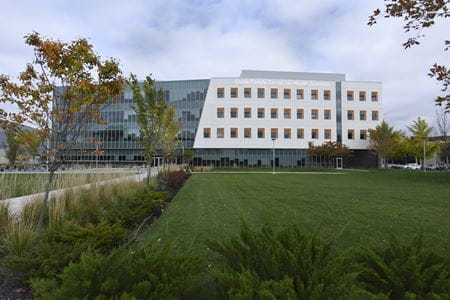 “I think you’re going to see a tremendous change in the next decade on the Evansville scene.”

These were the words of Steven Becker, MD, recorded in 2012, just one year into his post as associate dean and director of Indiana University School of Medicine-Evansville.

Fast forward to 2021, and his bold prediction has proven true: Evansville has become a model for how to grow a health care community. In less than a decade, the region’s competing universities, major health systems and business leaders have united around a common vision and secured funding to open a world-class health sciences center in the heart of Southwest Indiana. 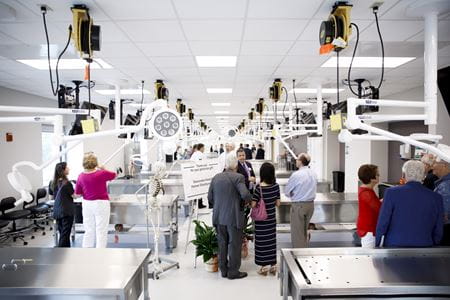 Opened in August 2018 in downtown Evansville, the Stone Family Center for Health Sciences doesn’t belong to any one entity. It belongs to the community. Supported by a $15 million gift from Evansville businessman William Stone, more than $26 million from the State of Indiana and $55 million from the City of Evansville, the Stone Center is home to IU School of Medicine-Evansville, along with University of Southern Indiana and University of Evansville graduate programs for nursing, occupational therapy, physical therapy and physician assistants. Plans are in place for the IU School of Dentistry to join this collaborative health professions community soon.

In tandem with the new building, new residency programs are sprouting up to make Evansville a health care hub. Over the last three years, IU School of Medicine-Evansville has added 87 new physician residency positions in family medicine, psychiatry and internal medicine through partnerships with four regional hospitals and grant funding from the Indiana State Graduate Medical Education Board. This innovative, collaborative approach is aimed at keeping well-trained physicians in Southwest Indiana, practicing in underserved and rural areas. 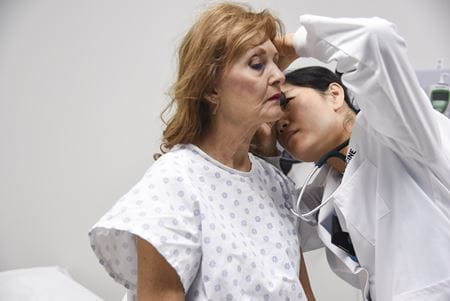 Members of the Evansville community are benefitting from new opportunities to join clinical trials in gestational diabetes, Alzheimer’s disease and other medical conditions. Local cancer survivors will have a place to go for wellness resources and healthy lifestyle coaching in dedicated space at the Stone Center.

“The remarkable success of the work in Evansville will serve as a model for the rest of the state as we build new facilities and continue to grow residency programs,” said IU School of Medicine Dean Jay L. Hess, MD, PhD, MHSA. “I would not be surprised if people travel here from around the country to see what the future of medicine looks like.”

It’s all quite remarkable, considering 11 years ago Becker was thinking more about retirement than leading a regional effort to expand medical education in Southwest Indiana.

‘I agreed to do it for two years’

When Becker got a call from D. Craig Brater, MD, dean of IU School of Medicine at the time, asking if he would take on directorship of the Evansville campus on an interim basis, Becker initially turned it down.

“I said I can help find somebody in the community, and he told me just to think about it a couple weeks,” Becker recalled. 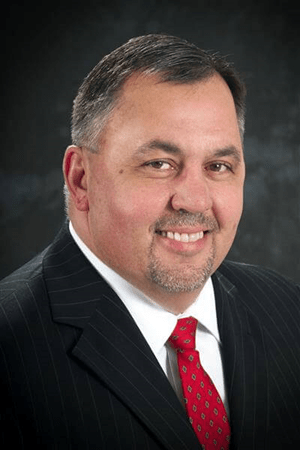 He and his wife, Carol, had just sent their last kid off to college and purchased a place in Florida. A professor of clinical radiology and imaging sciences, Becker was easing into retirement, working 20 weeks a year. It was Carol who convinced him to take the interim leadership position, knowing how much he cared about the medical school’s future in Evansville.

“I agreed to do it for two years.” Becker chuckled. “Now I just passed my 10th year as director.”

Once Becker had committed, it was like popcorn kernels into hot oil. Things immediately began popping.

Six weeks into the job, Becker got a call from Dan Adams, MD, a retired heart surgeon who had been elected to the Evansville City Council. He was keyed up, energized by a lunch conversation he’d just had with two community business leaders.

“I told them you are a dynamic and entrepreneurial leader, and you’re doing great things for IU School of Medicine in Evansville,” Becker recalled Adams telling him. “He said, ‘I do believe that in you—you are a builder—and I said you would call them within the hour to set up a meeting.’”

Becker soon found himself meeting with two leaders of the newly formed Evansville Regional Business Committee (ERBC), a consortium of 20 or so executives of the area’s major companies— “the movers and shakers in our region,” said Becker. They asked him to dream, to lay out a plan for what IU School of Medicine-Evansville could be if money were no object.

“The medical school didn’t mean a lot to Southwest Indiana at the time, but I knew it meant a lot and was critical to the growth in our region to have physicians trained in the area,” Becker said. Now the locals know, too. They know their area is energized with innovation, their downtown has sprung to life, and IU School of Medicine is at the center of it all. There are new apartments and housing developments, two new hotels, a convention center, a new YMCA, a casino and about 60 new restaurants—all within a few miles of the Stone Center.

“This is much bigger than I could have dreamt could happen,” Becker said. “People are shocked how the downtown area has come to life with the building of the Stone Center.”

Mark Browning, MD, has to laugh when he hears people in Evansville excitedly talking about the “new” medical school.

“All these people tell me, ‘We have a medical school here—isn’t that great?’ Well, it’s been here almost 50 years,” said Browning, an Evansville oncologist and adjunct clinical professor of medicine at IU School of Medicine-Evansville who was honored in 2019 for his enduring commitment to the school. 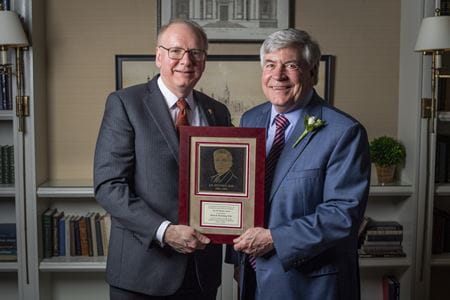 In 1973, Browning was one of 10 medical students assigned to do their first-year studies on the Evansville campus. Back then, it was somewhat of an experiment. Facing a physician shortage, the Indiana General Assembly created the Statewide System of Medical Education in 1971 with the goal of training a greater number of physicians, at multiple sites throughout the state, hoping to see them return to those regions to practice medicine.

In the fall of 1972, IU School of Medicine-Evansville opened with six students and six faculty members. A year later, Browning, an Evansville native, was surprised to learn he would not be heading to Indianapolis to start his medical school training but rather staying in his hometown. Even more surprised was one of his classmates.

In June 1973, on his wedding day, Terry Brown, MD, brushed aside congratulatory cards and anxiously opened a piece of mail from IU School of Medicine. He was relieved and elated to learn he had been admitted, but further reading left him puzzled—and wondering if the offer was real. He was assigned to study in Evansville, more than an hour south of his hometown of Jasper. He didn’t know the medical school existed there.

When he arrived on the University of Evansville campus, he recalled the facilities were meager: “What I can remember of a library was a bookshelf.” Yet his time in Evansville left him with close-knit friendships and newfound confidence—in a class of 10, everyone had a voice.

“It matured us,” said Brown, an obstetrician-gynecologist who retired from his Jasper practice in 2017 after 36 years.

Those 10 bewildered medical students who came to Evansville in 1973 have maintained their friendships for decades now, and some, like Browning, are still practicing in the Evansville area.

“That bond has lasted all our lives,” he said.

This fall, IU School of Medicine-Evansville will welcome 32 first-year students, and they will have the opportunity to stay on the regional campus for all four years of medical school. That’s made possible through a strong network of clinical partners, including six regional hospitals, and the altruism of more than 760 practicing clinicians who volunteer as adjunct faculty to train the next generation of physicians. 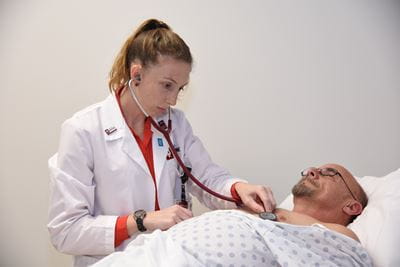 “You’ve got to realize these smaller campuses do have their advantages. A very senior physician can be one-on-one with a student for months or even years,” said Browning, who has volunteered as a preceptor for more than 32 years and funds several endowed scholarships with his wife, Jennifer.

Opportunities are also increasing for students to get involved in statewide clinical research projects since Evansville has become a regional site for the Indiana Clinical and Translational Sciences Institute (CTSI).

Medical students now have opportunities to learn alongside residents in the hospital setting, too. Residency positions in Southwest Indiana have increased from 18 to 120, and Becker expects to see that figure double in the next five-to-eight years. As part of a unique partnership, residents rotate at two or more cooperating hospitals in a program run by IU School of Medicine.

“The hospitals have come together, and that’s a win for Indiana,” explained Catherine Zimmermann, director of development and public relations for IU School of Medicine-Evansville. She was Becker’s first hire back in August 2011 and has a hand in growing the Evansville health care community. 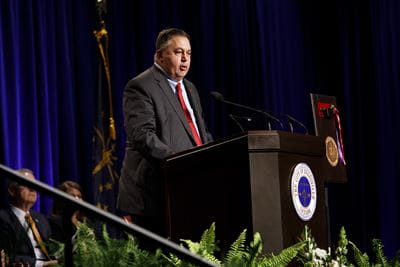 “The medical school is at the center of an economic revitalization of the city,” Becker said. “It’s really a remarkable story of a region where most people never thought this could happen—they never thought Evansville could come back to life,” Becker said. “Hundreds of people got involved and worked together. This has injected a can-do spirit and excitement into the region.”

Today, nearly everyone in Evansville is aware of the medical school and its impact.

“It’s been an incredible ride, and it keeps going,” Becker said. “There’s not a day I get up and something doesn’t happen where I think, ‘Wow!’” 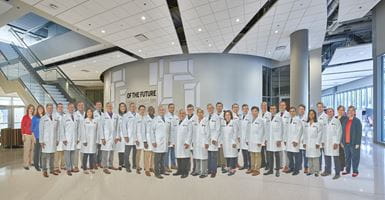 Hear what IU School of Medicine-Evansville students have to say about their experiences on this thriving regional campus.