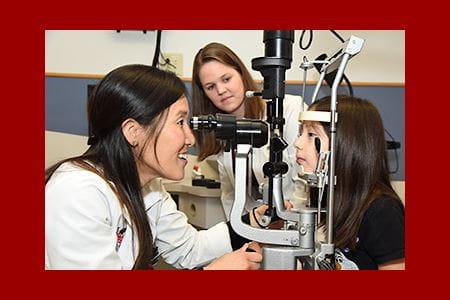 The Department of Ophthalmology at IU School of Medicine welcomed its inaugural class of first-year residents in July 2021 after transitioning to become an integrated residency program.

Previously, ophthalmology residents had the option of completing their first year of residency—postgraduate year (PGY) one, or the intern year—at a different institution before moving to Indianapolis for the remaining three years of their educational training (program years two, three and four).

Effective July 1, 2021, the Accreditation Council for Graduate Medical Education (ACGME) is now requiring residency programs to adapt to an integrated or joint format for PGY1, meaning all years of training would be offered through a single institution, said Charline Boente, MD, MS, who serves as the residency coordinator for the ophthalmology department.

The ACGME gave residency programs about two years to prepare for this change. For Boente, that meant creating a curriculum for the residents’ intern year from scratch.

The first year of any residency is an important transition period, Boente said. During this time, learners evolve from being a medical student to becoming a practicing physician, so it’s important to have a strong foundation early on, she said.

To create a well-rounded year of training, Boente lined up an array of clinical settings for interns to study in fields and specialties complementary to ophthalmology. This differing but complementary lineup is designed to give the interns a strong, broad understanding of general medicine.

Interns will do much of their training at the Richard L. Roudebush VA Medical Center in specialties such as general medicine, anesthesia and intensive care. The intern year will also include three months of ophthalmology at various locations.

Having the interns start their training on the same medical campus where they spend the rest of their residency comes with its advantages, Boente said.

They become assimilated into the system, become familiar with IU School of Medicine, and get to know the faculty and their fellow residents a year sooner than they would have under the previous program framework, she said. Then they hit the ground running during their second year of residency when the intensive ophthalmology training begins.