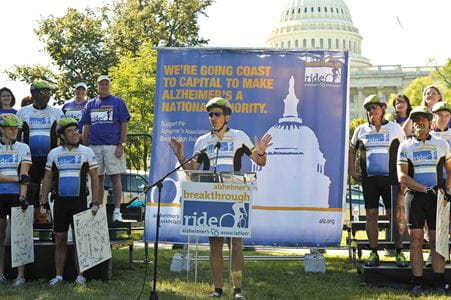 Riding his bicycle through the Chagrin River valley in Cleveland one warm, humid Sunday morning in the summer of 2009, Bruce Lamb, PhD, had a great deal on his mind.

Lamb, a leading Alzheimer’s disease researcher, had recently returned home after reviewing grants for the National Institutes of Health. Federal research funding for the neurodegenerative disease had been dwindling at the time, while the number of people afflicted with the disease continued to climb.

Now, close to 5.8 million people in the United States are estimated to have Alzheimer’s disease or related dementia, and that’s expected to rise to about 14 million people by 2050.

“I was thinking on this ride, we need to do something,” said Lamb, executive director of Stark Neurosciences Research Institute at Indiana University School of Medicine. “As researchers, we needed to step up and try to build that awareness and recognition of what needs to be done.” 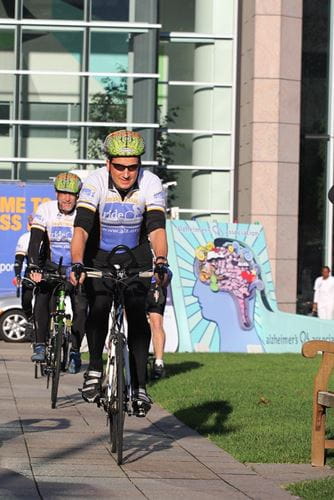 Lamb, who joined IU School of Medicine in 2016 from the Cleveland Clinic and Case Western Reserve University, shared his idea for a cross-country bike ride with the Alzheimer’s Association. The group had already been working with members of Congress to push for the National Alzheimer’s Project Act—later signed into law in 2011 by President Barack Obama.

Now, 10 years later, funding for Alzheimer’s disease research is at an all-time high. Funding that used to hover between $350 million and $400 million a year a decade ago has now increased more than six times that to $2.8 billion now, which includes a $350 million increase at the NIH between fiscal year 2019 and fiscal year 2020, according to the Alzheimer’s Association.Named the Alzheimer’s Breakthrough Ride, more than 60 researchers cycled a total of 4,500 miles from the West Coast to Washington, D.C. over the course of 67 days in the summer of 2010. Along the way, the group built support for Alzheimer’s disease research and collected more than 100,000 signatures that were delivered on Capitol Hill to make Alzheimer’s research a national priority.

“That has enabled some of the funding for these larger national programs, that IU has been helping lead,” Lamb said.

IU School of Medicine, which ranked fifth in the U.S for funding from the National Institute on Aging in 2019, received nearly $38 million in new grant funding last year for Alzheimer’s disease-related programs, including:

After about a year of planning, the Alzheimer’s Breakthrough Ride was set to begin in the summer of 2010 in San Francisco. A total of 62 researchers from across the country teamed up for the ride, agreeing to bike in segments, typically between three to four days.

Leaders with the Alzheimer’s Association followed the riders throughout the route in a large purple RV and in other vehicles to both promote the event and to make sure all participants were safe. 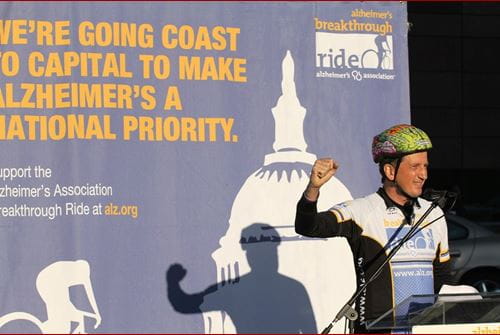 At the completion of the 67-day ride, which crossed 13 states, the group delivered the more than 100,000 signatures they collected to lawmakers on Capitol Hill on Sept. 21, 2010—World Alzheimer’s Day. Forty researchers joined close to 150 advocates to present the petition to Congress.

Some researchers were already avid cyclists and athletes, Lamb said, but many had to train for the ride, including himself. Participants cycled between 75 and 85 miles each day, with stops for breaks. One day wasn’t too difficult, Lamb said, but repeating that over the course of multiple days proved strenuous.

Other parts of the ride were at 6,000 to 7,000 miles in elevation in Arizona and New Mexico, much different than his training regimen in Cleveland. He rode a total of 600 miles, which also included a stretch from Michigan to Pennsylvania and from Maryland to Washington, D.C.

“All of a sudden I was out there and it was a small hill, but I could feel my heart beating out my chest,” Lamb reminisced about cycling in the Southwest. 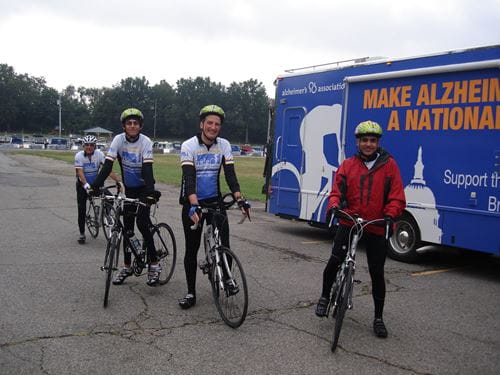 Despite the demanding physical aspects of the ride, Lamb said he appreciated talking with and learning from Alzheimer’s disease researchers from across the country during the journey.

Although the ride was organized around larger metropolitan areas, they would often stop in small towns. One day in New Mexico, they visited a school and talked with students there about the brain and Alzheimer’s disease, Lamb said. Another day they stopped at a small shop and talked with the store’s owner who shared how the disease affected his family.

“Events like that were really pretty amazing,” Lamb said. “You would hear all across the country stories about Alzheimer’s disease—my uncle, my grandfather, some sort of impact on them. It reinforced just how big an issue it really is.”