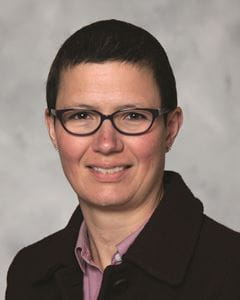 Indiana School of Medicine’s Department of Pediatrics is no stranger to employing successful women. The department’s faculty is currently 51% women and, of those women, they make up 54% of clinical track faculty. With this week marking the final week of Women’s History Month, this is a great opportunity to highlight some of these women and the incredible work they do for our organization, community, and for the field of medicine with their innovative research.

Jamie Renbarger, MD, unsure of what she wanted to do after high school, knew she wanted to get out of Fort Wayne, Indiana. She looked at a few out-of-state schools but fell in love with the University of Rochester in New York since the school had respectable arts and sciences programs. Renbarger had grown up playing classical violin, but also found a new interest in providing medical care for people once she became an EMT her freshman year of college. She continued to feed this interest by becoming a chemistry major. This newfound passion helped her make the decision early on in her college career to pursue medical school. Rochester proved to be the perfect fit for Renbarger, as she was able to stay engaged in music and prepare for medical school, but she grew tired of the long winters and was able to move to St. Louis once she completed her undergrad.

She attended St. Louis University for medical school and completed her residency at the St. Louis University School of Medicine, where she decided she wanted to be in Hematology and Oncology. When reminiscing about her time in residency, Renbarger mentioned how much influence Dr. Donna Wall had on her and what a great role model she was for her at the time. “She was the ‘mother hen’ for the residents and was able to connect with any patient and family,” said Renbarger.

Dr. Renbarger considered coming back to Indiana for her fellowship but felt that Baylor College of Medicine was a better fit for her at the time. After three years conducting research for her fellowship at Baylor, Renbarger flew out to Stanford University to hear Dr. David Flockhart, who at that time was the Division Chief for Pharm Oncology at IU School of Medicine, to hear him speak at a conference and meet with him afterward. Realizing that she wanted to be a part of the research that was being done by Dr. Flockhart and his team, Renbarger took an opportunity to come back to Indiana in 2002 to complete her second fellowship at IU School of Medicine and ended up working with the IU Health bone marrow transplant team for the first 13 years of her career.

In 2015, Renbarger helped to start the Precision Genomics Program and it officially launched in 2016. This program’s research is focused on outcomes with children that have sarcomas and optimizing health and wellness in cancer survivors. Renbarger is now the current Division Chief of Pediatric Hematology and Oncology. She never imagined herself being a division chief, but her colleagues recognized her ability to bring individuals together to form teams that are finding or developing innovative, clinical programs and thought she would be able to continue to naturally do this as head of the division.

In 2011, Renbarger traveled to the White House to receive the Presidential Early Career Award for Scientists and Engineers from President Obama. She received the award for her work in pharmacogenomic studies aimed at reducing neuropathies for children with cancer that are treated with the drug, vincristine. Renbarger is also the Caroline Symmes Professor of Pediatric Cancer Research and has been a member of the Alpha Omega Alpha Medical Honor Society for several years.

Renbarger shared that she recently started a non-profit organization here in Indianapolis called Karuna Precision Wellness Center in 2019. This organization focuses on addressing needs of cancer survivors by providing integrative medicine approaches aimed at optimizing their physical and mental wellness long after they have completed treatment. Karuna Precision Wellness Center was scheduled to have an open house in March of 2020, however, COVID-19 caused it to be delayed.

Renbarger is also a proud supporter of the St. Baldrick’s Foundation, where she has raised over $30,000 for the past several years by participating in the annual head shaving event. This will be her 8th year shaving her head for the Foundation’s event. She is a mother to her two teenage children and has several trips planned to see family, including a trip abroad to Paris to celebrate her younger brother’s birthday.