A digital system that tracks down all those pesky missing packages. A renovated rooftop greenspace for community and scientific events. A machine that assists clinicians with quick and efficient PPE application. A podcast that breaks down newly published studies. A social networking app just for scientists (you know, people who really get you).

You can only invest in one—which will it be?

That was the challenge for judges at the first-ever Wells Center Shark Tank event, which took place on Friday, March 12, via Zoom.

The virtual happy hour was a part of a series of social events created to promote camaraderie, conversation and collaboration within the Herman B Wells Center for Pediatric Research. Similar events included trivia nights, games, and contests while others focused on more serious issues such as barriers faced by women in STEM and faculty productivity during the pandemic.

The Shark Tank event was inspired by the television show of the same name, where small business owners pitch investment opportunities to a panel of entrepreneurs. Dibya Datta, PhD, spearheaded the Wells Center edition of the event.

“I wanted to create something that inspired creativity and collaboration in a low-pressure environment,” said Datta, who intentionally paired participants with partners who they may not work with ordinarily. 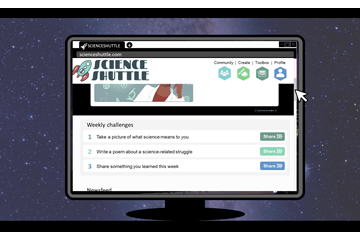 Ultimately, one team earned the favor of both the judges and the audience. Sukrati Kanojia, a PhD student in the Wells Center Pediatric Diabetes research program and the Department of Biochemistry and Molecular Biology, and Caitlin Bond, a research data analyst in the Pediatric Infectious Diseases and Global Health group, won the Judge’s Choice and Fan Favorite awards for their app-based social networking concept: Science Shuttle.

“As a scientist, 95% of the time you're dealing with failure, and you need something to motivate you or make you feel that you are not alone in this struggle,” said Kanojia. “So I thought, what if we could come up with a space—a safe space that is inclusive to scientific community, where you can share not only your success but also your failures.”

While there are several online communities for scientists, Kanojia explained that they are almost always specialty-based, limiting the potential for a diverse group of users. The Science Shuttle concept includes scientists and trainees from all backgrounds and work environments.

“I find that being grad student, you're working morning to evening in the lab. You really don't get an opportunity to go out there and meet people and connect,” Kanojia said. “So this can actually do that for you… you can interact with people from different fields and create a network.”

The pair were not originally supposed to work together. After their original partners withdrew, they were matched by Datta. It’s a good thing, too. They said that the idea evolved from a Twitter page to an app and website, and their victory relied on the blended ideas and talents of both team members.

At the live event, Bond and Kanojia wore matching Science Shuttle t-shirts and debuted a video advertisement created by Bond, who seized the opportunity to learn something new 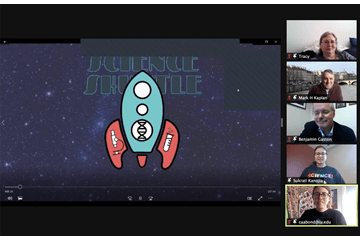 by taking advantage of the Adobe Creative Cloud software provided by IU. (Watch the video)

The winners received recognition and a book of their choice that focuses on nurturing their budding entrepreneurial spirit. While the Shark Tank event did not include any actual investment, Kanojia and Bond are clearly on to something with this concept, and they hope that the Science Shuttle (or something like it) will take off in the future.

Additional participants at this year’s event include: