Taking a chance on the unfamiliar: some thoughts from an Indiana transplant 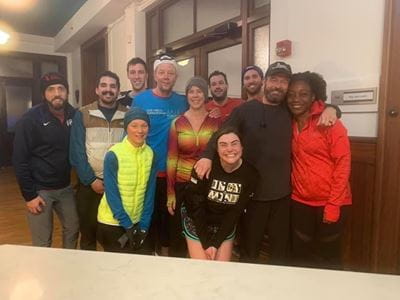 It’s human nature to be drawn to what we know, to what is familiar. For this reason, not many people are surprised to learn that my own type 1 diabetes diagnosis during childhood played a significant role in my decision to pursue training in pediatric endocrinology. When people hear that my diagnosis was the result of testing for a research trial designed to prevent it, my decision to become a physician scientist researching type 1 diabetes immunopathogenesis makes sense to them. My work and its implications are known by me and my family on a very personal level. It is familiar. And this is one of the reasons why I love it so much.

This appeal of the familiar, I think, is also why people tend to be confused when I tell them that prior to moving to Indianapolis to join the faculty at Riley in November 2018, I had no personal connections to the state. Indiana was not known. It was not familiar. In fact, until my first visit here in January 2018, the entirety of my knowledge of Indiana culture came from Seasons 1 and 2 of “Parks and Recreation” (which, for the record, is a pretty fantastic place to start). My decision to come to Riley to pursue my career as a physician scientist in pediatric endocrinology was rooted in the academic strengths of the Department of Pediatrics:  the opportunity to be mentored by well-respected colleagues whose work I had read and talks I had attended at conferences, the strong commitment to junior faculty development as evidenced by the current positions of former mentees, and the encouraging, collegial work environment that fostered creativity and collaboration, to name a few. I expected to love the work. What I hadn’t expected was just how much I would come to love the city as well.

I often tell people that Indianapolis is a hidden gem – and I truly believe that. It is a city filled with friendly people who care deeply about civic engagement and community development. If you jog along the Canal in the summer, you will inevitably pass an outdoor yoga class, or live music outside the Indiana Historical Society. In colder months, you just may have a chance to see Hamilton’s Leslie Odom, Jr. perform with the Indianapolis Symphony Orchestra. And when COVID-19 sidelines group gatherings during a period of heightened social unrest, the opportunity to participate in a virtual book club on The Color of Law with other young professionals will provide a space for connection, discussion, and reflection on the impact of systemic racism in our city’s history. Indy is a city that is small enough to foster real relationships with your neighbors, but large enough to support diverse interests and vibrant arts and culture. So to those in a position similar to mine, excited about IU School of Medicine’s rich academic environment, but unsure about the city, I’d encourage you to take a chance on the unfamiliar. If I’ve learned anything about Hoosiers since moving here, it’s that they won’t let it stay unfamiliar for long.

Pictured:  Myself with some of my favorite people in Indianapolis – the Naptown Run Club!