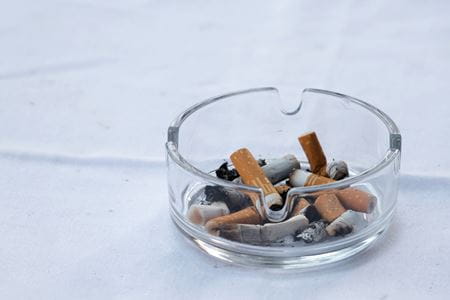 For as long as he can remember, Tatsuyoshi Kono, PhD, has strongly discouraged smoking cigarettes. In fact, as a child he successfully persuaded his own family members to quit because of its association with increased risk for health problems, such as Type 2 diabetes.

Now an assistant research professor in the Indiana University School of Medicine Department of Pediatrics, Kono is working to figure out exactly what leads to this risk with hopes that he can help more people stay healthy and quit for good.

“I personally have a family history of Type 2 diabetes,” said Kono, who conducts his research within the Center for Diabetes and Metabolic Diseases and the Herman B Wells Center for Pediatric Research. “I wanted to follow up with my family to share why smoking is so detrimental in relation to Type 2 diabetes development. However, this data wasn’t available, so I decided to investigate it myself!”

In a study published in Molecular Metabolism, Kono and his colleagues sought to identify some of the key players that lead to the development of Type 2 diabetes among cigarette smokers. They implemented a novel approach that combines live animal (in vivo) models and petri dish (in vitro) models to uncover the underlying mechanisms that affect pancreas function and lead to higher risk for Type 2 diabetes in the smoking population.

To replicate the conditions of at-risk smokers, scientists compared two categories of mouse models that had been fed a high-fat, western diet: those exposed to cigarette smoke and those that were not. They monitored weight changes and glucose tolerance in both groups of mice while the test group went through 11 weeks of smoke exposure and another 11 weeks of smoking cessation.

The group found that the mice who had been exposed to cigarette smoke experienced excessive weight gain and buildup of a waxy category of lipids called ceramides during the cessation period. Overall, insulin maturation and secretion were impaired. To answer that, Kono and his team looked at pancreatic beta cells—the ones responsible for insulin production, in vitro. Their data showed that exposure to cigarette smoke led to an imbalance of free radicals and antioxidants within the beta cells. That imbalance is called oxidative stress, which is correlated with increased ceramide content in the pancreas, reduced beta cell mass and depleted insulin production—just like they observed in the animal models.

And that’s not all they found.

The group was able to reverse the detrimental effects of cigarette smoke exposure using an antioxidant treatment called N-acetyl cysteine, or NAC.

The Centers for Disease Control estimates that more than 20 percent of adults in the state of Indiana smoke cigarettes, so it may be more than a coincidence that Indiana adults have such high rates of diabetes and prediabetes—about 13 and 36 percent respectively.

Kono said that he is especially concerned for this population as cases of the novel coronavirus continue to climb.

“Since both smoking and diabetes are known to increase the risk for severe symptoms of COVID-19, I hope our study can help motivate people to quit smoking,” said Kono.

Next, Kono and his colleagues will take a closer look at ceramide accumulation and the pathways that lead to its altered metabolism in the context of diabetic stress. Kono said that he hopes these findings will be useful for future smoking cessation programs that focus on therapies that minimize oxidative stress and promote healthy weight management in former smokers—people like his family members.

“If someone is asking you to quit smoking,” said Kono, reflecting on his own persistent childhood requests, “please know that those requests are made out of love.”