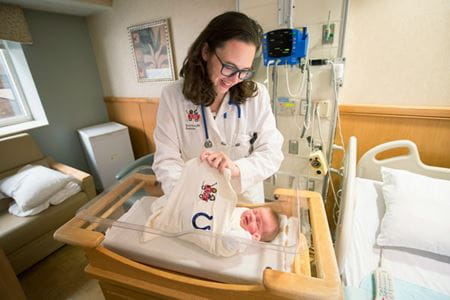 Emily Scott, MD, has had a big year so far. Scott was just named on the Indianapolis Business Journal (IBJ) list of 40 under 40. The IBJ chooses this group of young professionals who have "achieved a level of success, achievements or community engagement that stands out among other nominees." The prestigious Indiana award just celebrated its 28th year honoring 1,120 professionals in the Indy area during this time.

Scott has served as an assistant professor of clinical pediatrics with the Division of Pediatric Hospital Medicine since 2010. She works out of Methodist Hospital as the medical director for the well newborn unit. In her time as director, she has helped transform the way that the program gives treatment to mothers and babies that are opioid-addicted. Using a “hugs before drugs” approach, the well newborn team encourages mothers and babies to reunite sooner after birth to help wean the baby from their addiction.

“We treat the babies the same way medically, and we try to empower the mom,” Scott stated in her IBJ interview about the program.

In addition to being named as a 40 under 40, Scott’s team was named one of IBJ’s Health Care Heroes for 2020. The hospitalist group received Top Honoree status in Community Achievement in Health Care and was recognized at a breakfast held at the Indianapolis Marriott Downtown.