Never underestimate the power of your example as a physician 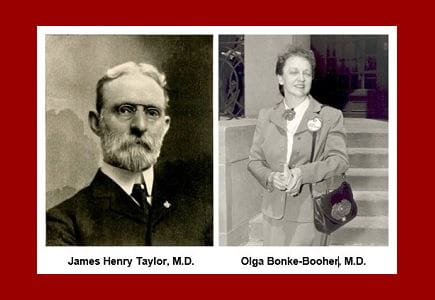 While his name has all but disappeared from the pages of Indiana’s medical history, James Henry Taylor, M.D. deserves to be remembered today not only for his many stellar accomplishments but for inspiring others to pursue medical careers through the power of his example as a teacher and physician.  Olga Booher, one of Dr. Taylor’s young patients, is an example of his influence.

Dr. Taylor was one of Indiana’s first pediatricians and a respected teacher and mentor to many generations of pediatricians.  He was born on November 15, 1852 in Greencastle, Indiana and died in Indianapolis on July 23, 1944.  Dr. Taylor, who was Class Valedictorian, was granted his Doctor of Medicine degree from the Indiana Medical College in Indianapolis in 1878. He began his career as a teacher in 1879 and for several years following was a Demonstrator of Anatomy at the Indiana Medical College.  A Demonstrator of Anatomy performed the cadaver dissection and explained the process to the class.  Anatomy was a cadaver laboratory course introduced into medical education at that time.

In 1888 Dr. Taylor pursued further post-graduate study in Paris and Vienna and returned a year later to the Medical College of Indiana where he was appointed Professor of Pediatrics and elected to the Chair of Diseases of Children and Clinical Medicine He held both positions from that time until the school closed in 1905.  In a biographical publication in 1899 his uniform kindness and courtesy to young physicians was commended.  The publication noted that since 1878 sixteen young men and women had studied medicine under his instruction in his medical practice.  Following their time with Dr. Taylor the majority stayed in Indiana to practice.  This apprenticeship system was still one means of medical education in the mid to late 19th century while at the same time, medical schools were increasing.

The power of his example continued to contribute to others through his long and large practice as a pediatrician and surgeon up until the age of 78.  When Riley Hospital for Children opened in 1924 Dr. Taylor joined the original faculty for Riley Hospital’s Pediatric Department.  He also served in the Pediatric Department at Indianapolis City Hospital (later Marion County General Hospital, then Wishard Memorial Hospital, and now Eskenazi Health).  He also provided service at the Indianapolis City Dispensary that provided medical care for the city’s poor populations, Methodist Hospital, and St. Vincent’s Hospital.    Besides taking care of both children and adults Dr. Taylor also delivered over 1,600 babies.   This was at a time in medicine when delivering babies became part of some physicians practice.

Throughout the life of one of his young patients who later became a pediatrician, Dr. Taylor’s dedicated presence and influence can be seen.  Olga Bonke was born Aug. 14, 1907, in Indianapolis and passed away on October 30, 2002.  When Olga was a young girl growing up in Indianapolis her pediatrician and the physician for her entire family was James H. Taylor, M.D.

Dr. Taylor obviously saw and believed in the promise of his young patient as she grew through the years and her interest in science and medical school.   Upon graduation from Manual High School in Indianapolis, Olga Bonke was recognized with the James Whitcomb Riley Medal in honor of her senior year grades and with the Holliday College scholarship for Butler University where she graduated in 1929. During her days at Butler she was a member and President of Zeta Tau Alpha fraternity.  The Zeta Tau Alpha Fraternity, an international women’s fraternity whose purpose is to strengthen friendships and develop each member’s potential, is now based in Carmel, Indiana.

Dr. Taylor’s continued interest and mentorship were still in mind as she began her studies at the Indiana University School of Medicine.  Dr. Bonke-Booher later recalled in an oral history interview that “As a matter of fact, he came to my first case presentation in seminar and another pediatrician brought him.  He was quite an old man at that time, of course.”  She credited Dr. Taylor as being a major reason for her decision to become a pediatrician.

In 1933 she received her Medical Degree Cum Laude from the Indiana University School of Medicine.  She again looked to her pediatrician’s example of future training and where to go next.  She remembered his going to Vienna and that had been her idea since she was a small child – going to Vienna for her pediatric training.  Apparently she also thought of surgery as a specialty along the way but decided on pediatrics.  By the time she was ready for Vienna it wasn’t considered the ultimate place for pediatric education.  She said “I thought Riley Hospital was”.  Dr. Bonke-Booher was one of the first female chief residents in pediatrics at Riley Hospital for Children and had served there as head of the Children's Diabetes Clinic.

Dr. Olga Bonke married Norman Rogers Booher, M.D., an internist, in 1934.  As a woman ahead of her time, she hyphenated her maiden name and husband’s name to recognize both identifies and became Dr. Olga Bonke-Booher.  She and her husband had a private practice in Indianapolis for a number of years until his death in 1973, when she retired from full-time practice.

Much like Dr. Taylor, Dr. Bonke-Booher led an active professional life and was devoted to community service.  Among her many accomplishments she received the Maynard K. Hine Medal in 1975 for her contributions to Indiana University in Indianapolis for her 22 years as Secretary of the Alumni Association.  She also served as president in 1962; She was recognized by the Indiana State Medical Board for 50 years of practice in Indianapolis.  She also represented the Indiana State Medical Association on the Indiana Nutrition Council for five decades, beginning in 1947.  In 2000, when she officially retired from Indiana University, she was appointed Volunteer Clinical Associate Professor Emeritus of Pediatrics.

In a 1993 oral history interview, Dr. Bonke-Booher still remembered an incident that occurred while she was a child under the care of Dr. Taylor, who as her pediatrician wanted to vaccinate her.  She recalled running around the room but knew that kind of behavior just wasn’t to be put up with by her pediatrician.  As she said, “I guess I calmed down because I was vaccinated.”  She said that despite having to get vaccinated, she was very fond of him, a recollection she made when she was 86 years old.

The child who grows up before your very eyes in clinic visit after clinic visit year after year may very well one day remember you as the reason why that child grew up to become a pediatrician, too.  Just like you.

Never underestimate the power of your example and influential presence in the lives of the families and children that you care for as a physician and especially as a pediatrician.