From Drowning to Soaring: Pediatric Nephrology's Journey through the Past Five Years 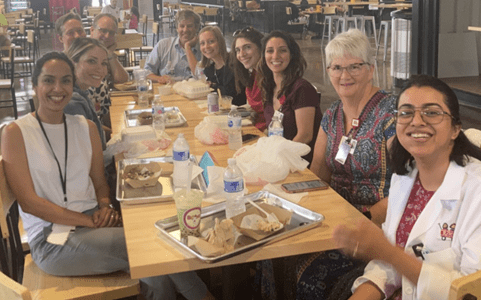 Indiana University School of Medicine’s Pediatric Nephrology division is ranked 14th in the nation clinically, a jump of nearly 20 spots from its ranking of 34th just five years ago.

Pediatric Nephrology has seen significant growth within those five years by adding several providers to their team. This increase in faculty was needed to help relieve the workload that the division was facing, but ultimately, sharing that clinical work amongst more team members allowed the division to increase their academic productivity and research. Since adding more research-focused providers, all members of the Nephrology division have since been able to publish multiple papers, become PIs or site PIs for clinical studies that are patient focused, presented their findings at national meetings, and have more than 20 clinical studies that are currently underway.

This expansion started in 2017 when, David Hains, MD, returned to Indiana to become the Division Chief of Pediatric Nephrology. Hains, having graduated from Indiana University’s medical school in 2004 and now being a nationally recognized nephrologist, came in as Division Chief realizing that his division needed to grow and increase their research efforts. “Either we need an additional person that can help us with clinical aspects of a program, a person with a focus on education, or someone to help with research. We usually have in mind of what type of person we want and then post the job to see who applies.”

The original team that consisted of Corina Nailescu, MD, Myda Khalid, MD, andy Amy Wilson, MD, started to change when Hains added two research-focused physicians in Andrew Schwaderer, MD, who had collaborated with Hains on previous projects and grants, and Michelle Starr, MD, who was able to add an outcomes-based clinical research dimension to the division that they had never had before. The team then brought on Neha Pottanat, MD, who is the medical director for the dialysis unit and Sushil Gupta, MD, to their clinical arena, which ended up more than doubling their clinical-focused faculty. Vijay Saxena, PhD, also joined under Dr. Schwaderer’s research program.

The three original clinicians that were with the division, prior to Hains, were spread thin with their work as they were busy covering the entire state of Indiana, which left them little time to be involved in the academic realm of their work. Pediatric Nephrology had the goal of expanding their mission and building out their bandwidth so they could continue to serve their patients on a broader scale, but also pursue new knowledge and help train the next generation of pediatric nephrologists.

When looking to add physicians, Hains stressed that he wanted to find people that could pursue their interests here and be programmatic builders. “As we grow and diversify, we have different needs,” says Hains, “Peds Neph is typically a small community and there have been some one-offs where people reach out, especially if we have a job posted that is research focused.” The division’s national recognition for their work has also caught attention from promising applicants as Hains continues to receive interest from providers and fellows that want to come work for Riley Children’s Hospital.

Pediatric Nephrology’s jump in US News and World Report rankings over the past few years is believed to also contribute to candidates rising interest in the program. This is one of the first resources that fellows, residents and potential faculty use to evaluate programs throughout the country. Hains shared, “Once we get people here, we usually don’t have trouble recruiting folks. It’s an awesome group of people and you can feel the whole positive culture of Riley no matter where you are; it’s the whole School of Medicine campus for that matter.” The national rankings at least start the conversation for these potential students or professionals to consider the program and lead those individuals to keep IU School of Medicine on their short list.

Schwaderer said he himself was drawn to IU School of Medicine by its Midwest humbleness and explained why other applicants would be interested in coming here. “It’s now become a nationally recognized peds department, they didn’t announce their own laurels and they still have a lot of unrecognized potential,” shared Schwaderer. There has recently been a national shortage of pediatric nephrologists, but the division saw a record number of fellowship applicants last year. This was in part due to COVID-19, where potential fellows could attend virtual interviews instead of flying out to their desired landing spots.

Starr, who joined the faculty in October of 2019, spoke of the program, “I could not have found a better group or division to land in. I feel very thankful, and it feels like I joined a rocket ship on its way upward.” She noted that the complexity of care has increased in children so their need for more clinicians has grown. Their team has seen an increasing number of patients with kidney issues, especially babies born early, who are three times more likely to have kidney problems or critical illness. The division is leading a lot of various cutting-edge initiatives and has the nation’s first neonatal nephrology program of its kind that involves inpatient and outpatient care.

The entire team has been able to become more productive and they have the numbers to show for it. Wilson has increased the ambulatory blood pressure monitor program by going from 40-50 monitors a year to now doing 50-60 monitors in one month. Nailescu has partnered with transplant surgeons, and significantly increased transplant numbers, along with sitting on national boards as an expert in vaccines and how those affect patients that are on immunosuppression. Gupta travels to Evansville and Fort Wayne clinics several times a month to treat new patients and brings on new therapies for nephrotic syndrome patients that are not yet at Riley. Pottanat has positively made numerous changes to the dialysis unit.  The number of days that are normally needed for inpatient dialysis have been cut down by half, and the entire nursing staff for the dialysis unit has doubled, which has led to vast improvements in all their quality metrics. Starr has led a new program which has enhanced their ability to identify patients with kidney injury in the neonatal ICU. Their improvement is staggering as they have gone from identifying nine percent of children with kidney injury to now being able to identify 100 percent of all children with kidney injury in the NICU.

With so many changes shaking up the division, the goal now is to stay on this course of growing and diversifying. Before 2017, Pediatric Nephrology at Riley was “drowning in clinical work” according to Hains, but now the team can focus more on patient care during their clinical time, and they can direct more attention to their programs as well as their research projects.

“Every single person in the division has that other dimension that makes our program well-rounded,” said Hains. With the proper building blocks in place to form a strong base, the Pediatric Nephrology division can really push the envelope on developing their program even further.