History of Medicine Book of the Week: Heredity in Relation to Eugenics (1911)

Eugenics, Genetics and a Fit Society

By Maria Asuncion A. Abeleda 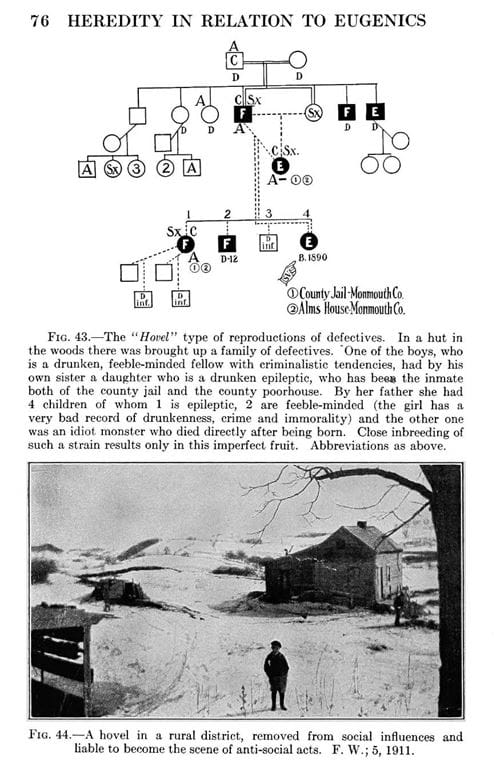 Figure of a pedigree chart for a family of "defectives" and photo of a rural district where this family possibly lived.[i]

“It is better for all the world if, instead of waiting to execute degenerate offspring for crime or to let them starve for their imbecility, society can prevent those who are manifestly unfit from continuing their kind. . . . Three generations of imbeciles are enough.”[ii] These were the words of Justice Oliver Wendell Holmes Jr. who wrote the decision of the United States Supreme Court in the Buck v Bell case in 1927. This was the case of Carrie Buck who was a patient in the Virginia State Colony for Epileptics and Feeble-minded and challenged a law that permitted sexual sterilization of inmates of institutions in order to promote the “health of the patient and the welfare of society.”[iii] The US Supreme Court determined that the compulsory sterilization law did not violate the Constitution. American eugenicists rejoiced in this US Supreme Court decision because this led to enforcement of sterilization laws in several states which boosted the influence of the American eugenics movement on the general public even though the state of Indiana passed the first compulsory sterilization law in 1907.[iv] It was in the heartland of the Midwest, where the majority of the population were white, that eugenics programs were first implemented to lessen the population of poor whites in the rural areas and to encourage white educated families to produce more healthy and fit children.[v]

One of the central figures in the propagation of the eugenics movement in the United States was Charles Davenport, a prominent biologist and geneticist, who founded the Eugenics Record Office (ERO) located in Cold Spring Harbor, New York in 1910. The ERO was the research institute for eugenics and heredity that collected information regarding family history and biological and social data of the American population from 1910 to 1939.  According to Davenport, “eugenics is the science of the improvement of the human race by better breeding.”[vi]  He believed that most human diseases and conditions (like pauperism, criminality, feeblemindedness, epilepsy and insanity) could be passed to offspring and the subsequent generations. Therefore, he proposed that the general program of the eugenicist was to induce individuals with desirable traits to reproduce fit offspring and prevent individuals with undesirable traits to produce unfit offspring.  He also advocated the state-control of the propagation of the mentally and socially incompetent within the population in order to prevent the strain in society’s resources and the decay of the human race.

In 1911, Davenport wrote a book entitled Heredity in Relation to Eugenics, which was printed with the financial support of the Carnegie Institution. This book was about the science of eugenics and how it could be used to address social and public health concerns and well-being of the population. It was written to validate and justify of the application of eugenics and creation of eugenic programs like the state compulsory sterilization laws to curtail the reproduction and procreation of individuals with undesirable traits like mental deficiency and pauperism.  Eliminating undesirable human traits within the population would eventually lead to a fit society as envisioned by Davenport and other staunch supporters of eugenics. To prove that eugenic programs were beneficial to society, Davenport employed two scientific theories in the field of genetics: namely, Darwin’s theory of natural selection and Mendel’s principles of inheritance. In 1859, Charles Darwin proposed the theory of natural selection which stated that populations evolve over time and that those who adapt well to their environment were more likely to survive and reproduce, passing their heritable traits to future generations.[vii] In 1865, Gregor Mendel performed crossbreeding experiments on pea plants to exhibit that traits of an organism were transmitted in discrete units and controlled by single units or genes and the appearance of these traits was dependent on the pattern of inheritance (dominant or recessive).[viii] Davenport believed that human diseases and conditions (like pauperism and feeble-mindedness) were inherited through simple patterns of single gene determinants. Hence, two poor individuals would produce poor children and two feeble-minded individuals would produce feeble-minded children. Even though new knowledge emerged afterwards on the complexities of the inheritance of human diseases and conditions and the possible effect and contribution of the environment on these human traits, Davenport continued to defend and maintain his understanding of genetics and eugenics until his death in 1944.[ix]

Within the book, multitudes of pedigree charts of American families who suffer various human diseases or have certain social or physical conditions were presented to validate the eugenic view of the hereditary nature of human diseases and conditions. Because of how influential and well-connected Davenport was during the height of the American eugenics movement, this book was used to disseminate information and knowledge about eugenics to the public and it became the standard textbook of the study of eugenics in US colleges and medical schools for several years.[x]  A first edition copy of the book can be found in the Leo J. McCarthy, MD, History of Medicine Room and Collection at the Ruth Lilly Medical Library. It is a grim reminder of the tragic history of American eugenics movement in the 20th century. Forced sterilization, anti-miscegenation laws, “Better Babies” contests, segregation, and racial discrimination were all done in order to achieve a eugenicist’s dream of a fit and robust human race and society by eliminating undesirable human traits through the knowledge of genetics.

Several historians and scholars have criticized the reasoning of the early American eugenicists that most human conditions were mainly caused by genetic predisposition and enhanced by environmental factors.[xi] They have demonstrated how American eugenicists like Davenport used the field of genetics as a front to obtain public support for the eugenics movement and that social, political and financial motives made the push of eugenic programs in the US.[xii] Eugenic programs, like forced sterilization laws and anti-miscegenation laws, were implemented because of the general public’s belief that mentally defective individuals would drain the state and federal funds and that darker races were not evolutionary developed compared to lighter races and intermarriage between them would lead to the deterioration of humankind.

[iv] Paul A. Lombardo, A Century of Eugenics in America: from the Indiana Experiment to the Human Genome Era (Bloomington, IN: Indiana University Press, 2011), https://iucat.iu.edu/catalog/14561917.

[vii] Charles Darwin, The Origin of Species by Means of Natural Selection, or, The Preservation of Favored Races in the Struggle for Life (London: John Murray, 1859), https://iucat.iu.edu/catalog/15030820.