History of Medicine Book of the Week: Counsels and Ideals from the Writings of William Osler (1905) 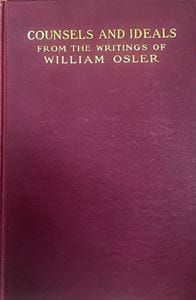 The Revolutionization of Medical Education

(right) Copy of Dr. Charles Camac’s Counsels and Ideals from the Writings of William Osler from the Leo J. McCarthy, MD, History of Medicine Room and Collection at the Ruth Lilly Medical Library (photo taken by author).

Counsels and Ideals from the Writings of William Osler is a collection of Dr. William Osler’s philosophical approaches to medical education and practice. This text was compiled by Dr. Charles Camac, a fellow educator, doctor, and aide to Osler. William Osler is best known for his work revolutionizing the medical curriculum of the US and Canada. He was born in Ontario and pursued his undergraduate and medical education in Canada before traveling abroad for postgraduate education. In 1888, he was recruited as the physician-in-chief of Johns Hopkins Hospital and professor of medicine at the school of medicine. He worked to synthesize the best elements of English and German education systems; from England he brought teaching at the bedside and from Germany he brought a postgraduate training system.[i]

Osler believed that students should learn by practicing medicine, rather than just observing, and that clinical instruction should begin and end with the patient. This is reflected in the elements of European education that he adopted, and the internship and residency period he introduced after graduate training at Johns Hopkins.[ii] These sentiments, which are extremely valuable and reflected in medical education today, especially in postgraduate medicine, are reflected within The Counsels and Ideals of William Osler. The text is composed of forty-seven of Dr. Osler’s writings, and includes a foreword written by Camac. These writings would primarily be of interest to medical humanists as a text detailing Osler’s philosophical views and thereby as a source that explains many of his contributions to the medical field. It would also be of interest to those involved in medical education either as students or as teachers as it serves as a reference point that these individuals could work towards in order to support and uphold Oslerian tradition. It contains the principles of how to be a good student, teacher, and physician.

Osler’s influence can still be seen through tributes to him in various medical journals as well as articles and books published on his life and work since his death. Prior to Osler’s arrival to the medical education scene in 1884, most physicians were trained via apprenticeship with a preceptor, as was common in Europe. However, most preceptors were too busy to commit to this role, so student learned through observation and reading textbooks. During the 19th century, a large number of proprietary medical schools were established, and a typical medical school had a very small faculty teaching the necessary courses. Very few schools had access to hospitals and many medical graduates had no hospital training. Through Osler’s efforts, clinical clerkships for medical students were implemented for their clinical years and the overall medical education improved through greater patient care, with a humanities focus. Oslerian teachings can still be seen now through the reemergence and reemphasis of the generalist role in medicine. While the structure of medical education that Osler helped to shape has survived in a viable way, the process and content of Oslerian tradition can be seen more clearly by those that are aware of the emphasis of academic humanism in medicine.[iii] The love of humanity that can be associated with philanthropy and the arts is linked with Oslerian tradition and medical schools are showing a higher commitment to emphasizing these values.

Osler composed his own medical textbook titled The Principles and Practices of Medicine in 1892, which is still known today as a medical masterpiece. There was a great diversity in the background of medical students and, similarly, a great diversity in medical texts prior to the publication of Osler’s textbook. Starting in the 1860s, textbooks acquired a more substantial role in medical school courses, but many of these textbooks were older with the authors being products of the 1830s-1860s schools. Textbook competition was intense with no one book dominating the market. By 1906, American textbooks dominated the list of textbooks, and by that time most were recently published. Of these, Osler’s work emerged as the single dominating text. His book was valued for its use in educating students, though it was considered weaker by practitioners for their uses due to how little Osler addressed treatments. The Principles and Practices of Medicine was used widely in women’s, homeopathic, and African American institutions. It reflected and promotes the emergence of national standards for medical education and practice. The introduction of this text and its systematic adoption provided for greater stability within medical education as well.[iv]

There are two sections of particular interest to the medical humanist, student, or teacher: “Medical Education: The Teacher, The Student, The University, The Hospital” and “The Practitioner of Medicine: The Student Practitioner, The General Practitioner, The Specialist, The Consultant.” It is in these two sections that Osler muses about the qualities of those involved in medicine and how to be the best student, teacher, and practitioner possible. He emphasizes balance in all things leading him to write about the drawbacks of specialization and intense focus.[v] This concept of balance would likely resonate with this audience. The copy that is stored in the Leo J. McCarthy, MD, History of Medicine Room and Collection at the Ruth Lilly Medical Library is a first edition from 1905. It was published in Boston by the Houghton, Mifflin & Company about 13 years before his death. It is unclear who this copy belonged to, but it was either well cared for or unused, because it is in good condition for its age.

This source is unique in that it is not a medical reference text and is actually more philosophical in nature. It is meant to guide the thought process of its readers. Osler states that education is the “complex, varied influences of art, of science, and of charity.”[vi] In many ways, this statement is representative of how Osler revolutionized the medical field. He advocates for a special education for the study of medicine and an inner education for the study of self and goodness. A student can be recognized by his “absorbing desire to know the truth, an unswerving steadfastness in its pursuit, and an open, honest heart, free from suspicion, guile, and jealousy.”[vii] Osler’s work serves as a guide, and medical education today is a reflection of this guide through its adherence to the influences of art, science, and charity. It continues to adapt to teach the newest wave of doctors how to be healers as well as doctors.