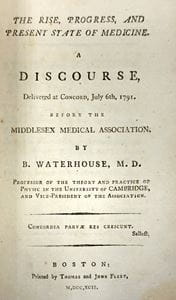 At just thirty-one pages and housed in an inconspicuous wrapper, Benjamin Waterhouse’s The Rise, Progress, and Present State of Medicine. A Discourse, Delivered at Concord, July 6th, 1791, Before the Middlesex Medical Association (1792) is a small volume that could easily be overlooked. The copy in the History of Medicine Collection was never bound in hard boards—a common practice used to gather shorter treatises on a related subject into a single volume—and yet it is in quite good condition and fortunate to have survived all these years. Benjamin Waterhouse (1754-1846) is most well-known as the first American physician to successfully practice smallpox vaccination, initially on his own family. He was also one of the earliest specially-trained American physicians, having studied in Europe with English and Scottish physicians John Fothergill and William Cullen. He roomed with John Adams while living in The Netherlands, and corresponded with Thomas Jefferson and many other prominent figures, specifically encouraging Jefferson to embrace inoculation as a common practice. When Waterhouse returned to a newly independent United States in 1782, he accepted a position as Professor of Theory and Practice of Physic at Harvard College. After leaving Harvard, he served in the Army during the War of 1812, and remained in the military until 1820. Though this book may be small and discreet, at nearly 230 years old, it is an interesting item from one of the United States’ earliest and most influential physicians, published when he was just 38 years of age.

An original copy of this work is available in the Ruth Lilly Medical Library’s History of Medicine Collection (Call Number: WZ270 W326r 1792).

A digitized version is available online through the U.S. National Library of Medicine’s Digital Collections: https://collections.nlm.nih.gov/catalog/nlm:nlmuid-2751023R-bk