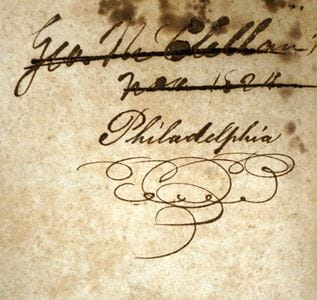 We were excited to discover the signature of George McClellan (1796-1847) in our copy of the first American edition of Robert Willan’s On Cutaneous Diseases (1809). Willan is considered the founder of modern dermatology and the first edition of this book was of great importance; it was one of two dermatological books to first contain color plates and also the first to use the word lupus referring to cutaneous tuberculosis. McClellan was a leading surgeon and well-respected teacher, giving private lectures in the anatomy room adjacent to his office. He is most remembered as the founder of Jefferson Medical College in Philadelphia, which opened its doors in 1826 and has since produced many noted American doctors. These associations are exciting to discover in our collection because they shed some light on the intent of the original collectors of the books, but also on a broader narrative in the history of medicine: who was reading whom. For one of America’s leading surgeons to own the work of another great physician is not surprising, but there is an inherent excitement when handling a book that you know was handled by a notable figure, even more so when it is signed and dated by that person. The date is notable in this particular signature because 1824 is the year he approached the Legislature of Pennsylvania to acquire the charter for the new medical college. McClellan’s surgical renown was wide, and it is said that he operated on people from all over the United States and Europe, and was the first American to perform several operations, including the removal of the parotid gland. McClellan died in 1847 at the age of fifty, but the distinguished family name was carried on by his famous son, Union Civil War general and the 24th governor of New Jersey, George B. McClellan. And of course, the college McClellan was instrumental in creating still maintains an esteemed place in the medical community.

An original copy of On Cutaneous Diseases with McClellan’s signature can be viewed in the Ruth Lilly Medical Library’s History of Medicine Collection (Call Number: WR140 W689o 1809).