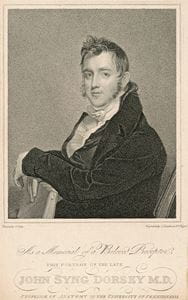 One of the significant and interesting items in our collection is a first edition of the first systematic book of surgery written by an American: John Syng Dorsey’s Elements of Surgery; for the use of students (1813). Dorsey (1783-1818) had been given a good education, both in America and Europe, and proved to be a student with discernible intelligence. As a young physician, he performed the first successful ligation of the external iliac artery in the United States. He was working and came to prominence during the era of Romanticism and his figure in many ways parallels the typical stories of those prominent poets, explorers, military figures, and scientists often associated with the period. Young, brilliant men, with immense talents and hopeful social positions, created impactful works and, in the case of Dorsey, on the evening of his first lecture at the University of Pennsylvania, was infected with typhus. He died several days later at the age of 35. In the spirit of this allusion, it turns out Dorsey was also a poet. Between 1805 and 1818, Dorsey created a 40-page manuscript of poems, some of which were published in the influential Philadelphia literary journal, The Port Folio.[1] Also in the History of Medicine Collection is a second copy of Dorsey’s important book of surgery, though only the second volume. However, what makes this book so special is that the author inscribed it to another doctor, with reference to the book itself. He actually inscribed the book twice. 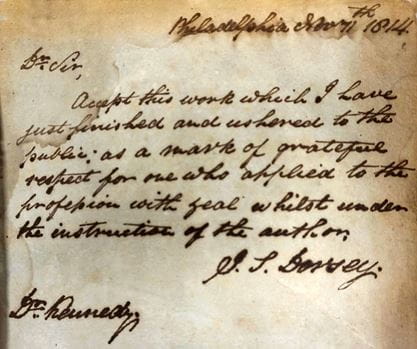 As inscribed on the front blank leaf:

Accept this work which I have just finished and ushered to the public; as a mark of grateful respect for one who applied to the profession with zeal whilst under the instruction of the author. 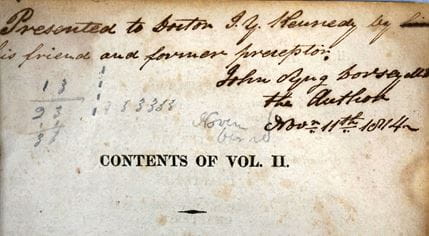 As inscribed on the Contents page:

Presented to Doctor J. Y. Kennedy by his friend and former preceptor.

Given that Dorsey died soon after Elements of Surgery was published, he may not have signed many copies. To call to mind the scene in which he generously writes in and gifts his masterwork to a former student, brings us that much closer to this important figure in the history of American Medicine.

An original first edition of this two-volume work is available in the Ruth Lilly Medical Library’s History of Medicine Collection (Call Number: WO100 D717e 1813 v.1-3)

A digitized version is available online through the U.S. National Library of Medicine’s Digital Collections: https://collections.nlm.nih.gov/catalog/nlm:nlmuid-2552013R-mvset

Image of John Syng Dorsey courtesy of the National Gallery of Art.[2]