Historical Book of the Week: The Physician Himself, and What He Should Add to His Scientific Acquirements (1882) 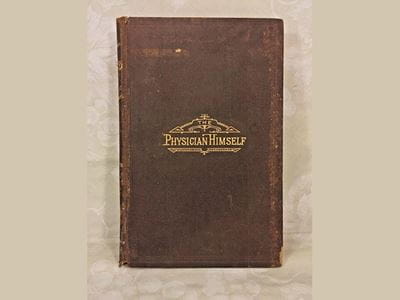 The cover of Daniel Webster Cathell’s book, The Physician Himself, and What He Should Add to His Scientific Acquirements. A second-edition copy, published in 1882, can be found within the Leo J. McCarthy, MD, History of Medicine Room and Collection at the Ruth Lilly Medical Library.

The cover of Daniel Webster Cathell’s book, The Physician Himself, and What He Should Add to His Scientific Acquirements. A second-edition copy, published in 1882, can be found within the Leo J. McCarthy, MD, History of Medicine Room and Collection at the Ruth Lilly Medical Library.

Medical education in the United States went from being unmethodical to more structured beginning around 1870.[1] The development of education consisted of establishing higher standards for both the university and the prospective physician. In this context, Daniel Webster Cathell wrote at least twelve editions of The Physician Himself and What He Should Add to His Scientific Acquirements between 1882 and 1922, a book that was directed toward helping physicians excel in their medical careers.[2] Self-help guides, such as Cathell’s, were useful for physicians who needed help acquainting themselves with the new social norms that were created by the increased standards of medicine. This book served as a guide for American physicians of this time and included tips on how to build a reputation and attract patients during an expansive time for the medical profession.[3] Although Cathell himself wasn’t widely known, the fact that he had multiple editions of his book published shows the impact that his words had upon other medical professionals and how popular his books were during this time.

D. W. Cathell was a physician himself. He graduated from the State University of New York Downstate College of Medicine in 1865 and started his own medical practice in Baltimore within that same year, making him a credible source for others within his field.[4] The main purpose of Cathell’s book The Physician Himself was to help knowledgeable physicians separate themselves from the quacks. On the first page he states, “there are gentlemen in the ranks of our profession who are perfectly acquainted with the scientific aspects of medicine, and can tell you what to do for almost every ailment that afflicts humanity… [that] have never achieved either reputation or practice, because they lack professional tact and business sagacity.”[5] Cathell didn’t want knowledgeable men to fail at their practice because of their lack of status, and he aimed to help them with practical advice.

Throughout his book, Cathell mentions multiple reasons why it was necessary for a physician to separate themselves from their competition, including the overcrowding of physicians in urban areas. When the enactment of licensing laws was established in the 1850s, more medical schools opened which caused a tremendous increase in the number of students who could enroll.[6] “The key source of physicians’ economic distress in 1900 remained the continuing oversupply of doctors,” Cathell wrote.[7] In response to this crisis, he offered useful tips to his readers, such as where to place your medical practice in order to receive the most business. He insisted that placement was very crucial because if you founded your practice next to other physicians it could deter business, but it was also important for your practice to be in an area close to places that people would access every day, such as schools and stores. Cathell also mentioned ways to obtain more patients such as having a clean and proper appearance, leaving personal matters at home, and treating patients with respect. Although this advice seems obvious today, a lot of physicians struggled with the transition to professionalization and this social guidance would have helped them outrival other physicians in this crowded marketplace.

As a result of overcrowding in this field, rivalry amongst physicians was not uncommon. The Physician Himself provided tips to physicians that were struggling with the competition that fellow professionals posed. This book gave physicians the knowledge necessary in order to provide their patients with a better quality of care in order to outshine their rivals. According to Cathell, a sense of competition can be beneficial; however, when coming into contact with a rival the physician should always behave like a gentleman.[8] Moreover, Cathell adds that medicine is an honorable calling, and a man practicing medicine should behave as such in and out of work. In addition, he advised against going into practice with other physicians because of the common rivalry. Going into practice with another physician would not be beneficial because every physician has a different level of knowledge and a different way of conducting business. As a result, tying your name and career with someone else’s could be very detrimental if your partner did not behave with professionalism and respect towards patients and other physicians.

The work of Daniel Webster Cathell was primarily beneficial to physicians of the turn of the twentieth century, providing them with insight into the recent rise of medical professionalization so that they could use this new social knowledge in order to flourish professionally. The Physician Himself demonstrates that physicians were intelligent, but needed assistance on the social aspect of medicine. Cathell even provided valuable insights concerning issues that physicians still struggle with today, such as the importance of seeing the patient as more than just a disease. He says “to be successful you should fathom each patient’s mind, discover its peculiarities, and conduct your efforts in harmony with its conditions.”[9] In the end, Cathell’s explorations of overcrowding, where to practice medicine, patient relationships, etc. are just as relevant today as they were in the nineteenth century.[10] As historian J. D. Howell has asserted, “good medicine was more than good science, and it still is. Cathell knew this; so did his readers; so do we.”[11] The Physician Himself provides its readers with a basic understanding of social roles and norms involving practicing medicine, showing that success in this profession relies on the knowledge of both medical and social science.

[3] D. W. Cathell, The Physician Himself, and What He Should Add to His Scientific Acquirements, Baltimore: Cushings & Bailey, 1882.