Historical Book of the Week: The Collected Syllabi of Dr. Thomas Dent Mütter (1850) 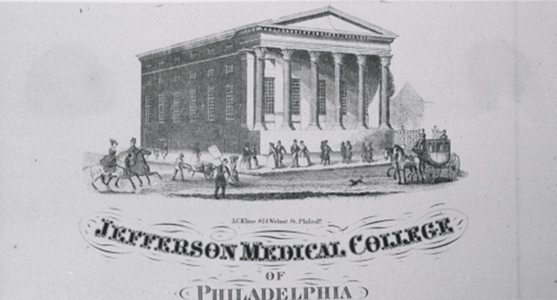 Formally titled Syllabus of the Course of Lectures on the Principles and Practice of Surgery Delivered in the Jefferson Medical College, Philadelphia, the collected syllabi of Dr. Thomas Dent Mütter is a curious book by an equally curious person. Dr. Mütter served as the Chair of Surgery for Jefferson Medical College from 1841 to 1856. If the name sounds familiar, it is likely because of the museum which shares it. Dr. Mütter was an avid collector of medical models and oddities. Though they now reside in the collections of the Mütter Museum, these items were once used as illustrations of conditions and procedures during his lectures.[1]

In his time as a professor, Dr. Mütter developed a reputation for himself as someone who was invested in his students, both in and outside the classroom. He encouraged students to do their own research, and to always be asking questions of their professors and the world around them. This philosophy bled into his lectures as well, utilizing what one author calls the Edinburgh “quizzing” style, presumably named after the famous medical school there. This turned lectures into something closer to a dialogue than the more standard professorial monologue.[2] While this “quizzing” style is not mentioned by this name elsewhere, Dr. Mütter did not seem to be alone in this philosophy.

Medical education in the United States took a great deal of inspiration from medical education in Europe. Dr. Mütter, himself, spent a year studying abroad in Paris. By the early 19th century practical instruction had largely become the norm. Students expected it the same way they expected a very one-sided classroom experience. Jacques Lordat, a professor from Montpellier, however, believed dialogue in the classroom to be a “powerful pedagogical tool.”[3] Joseph Carpue, in London, believed that the encouragement of students to ask questions could further cement the acquired knowledge in their mind, but also enrich the time spent in the classroom as a whole.[4] Though not common, it is clear from the writings of Dr. Mütter and his colleagues that this teaching approach made him very popular among the students of Jefferson Medical College.[5]

Dr. Mütter’s lectures may be lost to time, but the syllabi are not. His collected syllabi were published in 1850, six years before his retirement, and nine years before his death.[6] The copy housed in the Leo J. McCarthy, MD, History of Medicine Room and Collection at the Ruth Lilly Medical Library is a first edition, both written and compiled by Dr. Mütter himself. It was published in Philadelphia where he lived and taught most of his adult life.[7] It is unclear who this copy belonged to, but it was either rarely touched or highly cherished because at 170 years old, the pages are all intact and the spine is barely beginning to separate from the rest of the binding. It is likely that it belonged to a student of Dr. Mütter because who else would require a compilation of syllabi?

This source is unique in that it is not truly a medical reference text. While some factual information is presented, it is severely truncated, and meant to be supplemented with actual class instruction. It is also not a teaching manual. A person looking for teaching advice would be disappointed to find only lecture outlines, with no notes on how they were presented or the student’s reactions to them. The function of this book was not to educate people about surgical practices, but to provide a structured plan for education these procedures to be imparted in a classroom, specifically by Dr. Mütter. In that way, this book is more akin to a collected volume of letters than a medical textbook. It is a personal-professional document rather than formal scholarly literature.

Outside of its connection with Dr. Mütter, and by extension, with an emerging style of teaching, there is seemingly no good reason for this book’s presence in the History of Medicine collection. The level of detail presented varies wildly, ranging from just a term with no explanation to several pages worth of supplementary information given for one term. For example, under “Non-malignant Diseases,” the first term, Neuralgia, has six words listed under it, with no further explanation given. These are “Diagnosis, Causes, Symptoms, Prognosis, Diagnosis, Treatment.”[8] One would assume that these terms would make more sense after a lecture, but removed from classroom context, this is book effectively useless for imparting knowledge. Between every page there are two blank pages, presumably intended for note-taking. Considering Dr. Mütter’s teaching style, it is possible that these terms were left blank, because it was intended for the student to fill them in as they listened to the lecture and did their own readings. It would be in line with Dr. Mütter’s quizzing style of lecture. In some cases, though, such as the term “Caries, or Ulceration in Bone,” also under “Non-malignant diseases,” actual information is given, such as the proper treatment of these maladies.[9] There Dr. Mütter actually describes the types of remedies needed, and the stages in which to apply them. This is presumably because those terms would not be covered as detailed, if at all, in class, so more context was needed in the initial syllabus.

All of this, is of course, largely conjecture. Dr. Mütter did not leave behind many personal papers, and much of what is known about the man is known through the writings of those who knew him, either personally or professionally, or both.[10] There are no allusions to other people in this compilation, and it is a solo book, disconnected with any other medical texts. The tone is dry and academic, much like reading a dictionary, though with less defining all the way around. This is a supplementary source and a legacy building piece. Dr. Mütter suffered from poor health throughout his entire life. When this was published in 1850, his health began to take a turn for the worse. In the last six years of his life, Dr. Mütter began concentrating on what he would be leaving behind.[11]

[7] Thomas Dent Mütter, Syllabus of the Course of Lectures on the Principles and Practice of Surgery, Delivered in the Jefferson Medical College, Philadelphia. Philadelphia: J.H. Jones Printer, 1850.