History of Medicine Blog Series: Curious Mystery Found in a Book about Tuberculosis 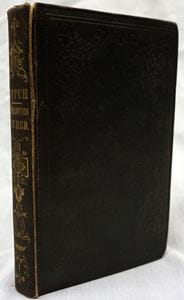 The thin cord that is wrapped around the book Six Lectures on the Use of the Lungs and Causes Prevention and Cure of Pulmonary Consumption, Asthma, and Diseases of the Heart (1847) by Samuel Sheldon Fitch (1801-1876) caught our attention recently. Initially assumed to be a remedy for a broken binding, this cord was soon revealed to hold a much more interesting discovery. A small pipe-like instrument tied to the front of the book and its accompanying signature (“John Arnold, Aug. 31st, 1848”) presented a challenge, as we spent much time researching this unknown Arnold. There have been several famous Arnolds, including the watchmaker John Arnold (1736-1799) who coined the term “chronometer” and made major contributions to timekeeping, and also of course the family of American Revolution figure Benedict Arnold (1741-1801, with no sons by the name of John), but the dates and names did not align with either historical figure. The small little “pipe” presented the more interesting mystery, as we were not quite sure in which direction to search. Setting aside the book, we reached for the next item on the shelf, which happened to be a thin folder of documents, and pulled out two letters addressed to John N. Hurty (1852-1925) who held significant influence on Indiana public health policy as Indiana State Health Commissioner. The letters, from J.F. Pratta in Southington, Connecticut, address Hurty’s comments on Fitch’s book and mention that Pratta’s mother had once been treated for tuberculosis by Fitch himself (but too late, for she died from the disease in 1852). Pratta also offered to send along the small exhalation pipe, prescribed by Fitch to his mother, if Hurty should be interested. Mystery solved.

An original copy of Fitch’s Six Lectures, the letters from J.F. Pratta to John N. Hurty, and the exhalation pipe can be viewed in the Ruth Lilly Medical Library’s History of Medicine Collection.

A digitized version of Fitch’s Six Lectures is available online through the National Library of Medicine’s Digital Collections: https://collections.nlm.nih.gov/catalog/nlm:nlmuid-65421290R-bk