History of Medicine Book of the Week: Nature’s Remedies (1934) 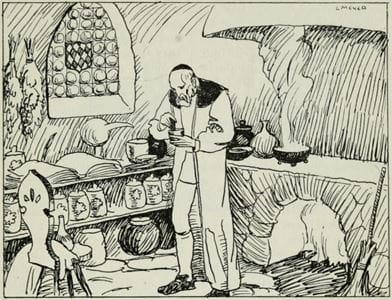 The herbalist at work. From Meyer, Joseph E., Nature’s Remedies: Early History and Uses of Botanic Drugs as Revealed in the Legends and Anecdotes of Ancient Times. Hammond, Ind.: Indiana Botanic Gardens, 1934, 6.

History through an Herbalist’s Eyes

Tucked away in the corner of the History of Medicine Room at the Ruth Lilly Medical library is a small, plain, green book titled Nature’s Remedies written by Joseph Ernest Meyer in 1934.[i] Flipping to the title page reveals the subtitle, Early History and Uses of Botanic Drugs as Revealed in the Legends and Anecdotes of Ancient Times. Flipping through it briefly, I was enamored by the colorful illustration of herbs which was unexpected for a history book. Skimming the section headers also caught me by surprise. “Vitamin E – The Sex Vitamin,” “We Will Live to 200 Years or More,” “This Nervous Age,” and “Monopoly in Medicine” are just some of the section titles that made me raise an eyebrow. What even is this book? In Meyer’s own words in the preface:

The purpose of this book is briefly to unfold the story of man’s use for his medicinal needs of the natural products of the forest and field, in the form of botanical or vegetable drugs and medicines, to note the gradual changes of opinion to the virtues of those natural drugs and medicines and the apparent reasons therefor, and finally to offer such conclusions and suggestions as seem necessary or warranted. While unfolding this interesting story of botanical, we shall take occasion to acquaint our readers with the nature of the service we have been rendering the public these many years and which we are constantly improving.[ii]

While the title suggests the book to be a folk history of botanicals, the preface reveals this is only one part of what is contained within its pages. Meyer does go into the legends behind Roman, Chinese, and Native American herbal medicine. But he also presents his personal (and political) philosophy of medicine as well as recipes for some of his own remedies, tips for growing your own herbs, and profiles of common botanicals. To understand why a book with such an array of disparate information would be written, it is important to understand the author and what were his intentions were in publishing it.

Meyer acquired his passion for plants and nature while accompanying his father on nature photoshoots throughout the Midwestern United States during the last decades of the 1800’s. Initially working at a printing company in Chicago, Meyer started his own business in 1910 after moving to Hammond, Indiana. Named Indiana Botanic Gardens, his business specialized in growing and selling herbs and natural remedies via mail-order catalog.[iii] During the 1920’s and into the 1930’s Meyer began traveling widely throughout the US and Europe in search of knowledge and rare botanicals. It is likely that during this time he compiled the folk legends featured in this book.

Meyer was not a historian, however, and retelling of history is not the primary focus of this book. On one level Nature’s Remedies could be seen as simply an advertisement for Meyer’s business. He published this book through his own company and throughout the text, features the products that he sold as well as the price. But this was more than just a glorified sales catalog as Meyer took the took the opportunity to express his anti-regulation attitude of medicine as well as how certain policies were restricting the freedom of businesses and consumers alike.

Meyer expresses several times his disdain for new laws and regulations put on his trade by the federal government. In particular he cites the Pure Food and Drug Act of 1906 as a conspiracy between the pharmaceutical industry and Washington DC to deny citizens the right to self-treatment and corner the market on medicine. This suspicion came from the fact that pharmaceutical companies pushed for industry regulation which allowed them to have a hand in writing the policy and defining what is considered medicine.[iv] He goes so far as to urge the reader to write their congressman and demand the right for the public to decide for themselves how to best treat their ills. This sentiment was in line with many alternative healers of the time whose ability to practice medicine was being curtailed by new legislation, an attitude which has a long history in American medicine.[v] Meyer also takes some time to explain his personal thoughts on the matter. He says that his goal is not to replace physicians, who he actually holds in high regard, instead he only seeks to provide natural treatments for the relief of everyday ailments. He believes that if people want to use his remedies, they should be able to do so, but he makes no claims to herbal medicines being the panacea to all ills. Meyers freely admits to being old-fashioned in a world that is changing with or without him.

Though the book at times can feel disjointed, Nature’s Remedies is truly a treasure trove of information. Whether a reader is looking for tales of the origins of natural healing in an several prominent cultures, researching folk recipes for common ailments, or fulfilling a curiosity about techniques for cultivating a wide range of botanicals, this book has something to offer. All of this information mixed in with the thoughts of a man passionate about his craft and acutely aware of how the tide of medicine is changing around him.  Joseph Meyer’s writings offer vital insight into this volatile time in American medical history where tradition and freedom clashed with science, industry, and regulation.