History of Medicine Book of the Week: Duncan’s Medical Cases (1778) 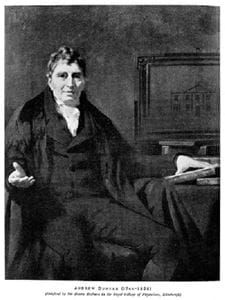 (right) Andrew Duncan, the elder, a man of philanthropic action and with a burning desire to learn and educate.[i]

Dr. Andrew Duncan, the elder (1744-1828),[ii] made clear his intentions for publishing his remarks and observations in his Medical Cases; to spread the knowledge of medicine for the sake of improving clinical practice. These records were initially reserved for lecturing his medical students but were made available to the public in 1773[iii] for the sake of sparking interesting in the growing field of medicine for an enlightened Scotland. A 3rd edition of Medical Cases, published in 1784, is now held in the Leo J. McCarthy, MD, History of Medicine Room and Collection at the Ruth Lilly Medical Library. Duncan’s impact on medicine has been largely forgotten. As historian G.T. Bettany fervently argues:

Duncan’s reputation has suffered by comparison with his more famous colleagues, but the comparison is unfair, for he was not a scientific but an intuitional innovator. He was particularly noteworthy in drawing on continental models when proposing new institutions and did much to break the insularity of the Edinburgh medical community. He was particularly far-sighted in promoting the unity of physicians and surgeons at a time great professional rivalry.[iv]

Duncan’s remarks and observations reflect the relevant shifts in evidentiary medicine. Collection of quantitative and qualitative data was meant to eject the old practice of forming solutions from single-case issues.[v] Medical Cases is a physical reminder of Duncan’s contribution to 18th century medicine that used statistical evidence from a large population.

Duncan was able to play a pivotal role in his time due in part to the credibility he gained from his association with Edinburgh University. Prior to his birth, the Medical Faculty established in 1726 had already solidified international recognition for teaching.[vi] This was a clinical teaching, “based upon demonstration and observation of patients.”[vii] After receiving his MA degree from St. Andrews University in 1762, he began journey as a medical student at Edinburgh University that same year, and obtained his MD from St. Andrews in 1769.[viii] Very soon he was elected the President of the Royal Medical Society in 1767 and again served from1769 until 1774.[ix]

The late 18th century and early 19th century is marked with medical rivalry. The concept of surgeon and physician are separate entities and men of the time were reluctant to merge them. Yet Duncan, the far-sighted man that he was, sought to bridge the gap. His formation of the Aesculapian Club (1773) and the Harveian Club (1782) were attempts to bring together surgeon and physician.[x] It is important to note the shift in professional status medical men were then experiencing. These clubs were social societies, modern day “network nestles,” where representatives of elite vocations may congregate and collaborate. This was an ingenuous move by Duncan, for it demonstrated his devotion to medical practice and opposition to theory. The parties together aided him in his scholarly pursuits with the publication of Medical and Philosophical Commentaries, the first scholarly medical journal to be published regularly in Great Britain.[xi]

Duncan, the elder was active in the academic pursuits and was also revered as a benevolent man who cared as much for his students as he did his patients. Since Duncan stressed practice over theory, he devised plans for a hospital, as there needed to be a place where his medical students could gain experience. In 1777 Duncan proposed and began working to create the Public Dispensary of Edinburgh.[xii] Construction was slow going, but there were many patients needing aid. The Dispensary was the first in Scotland serving the poor and destitute. Thus, the facility aided a community plagued with illness while providing a place where medical students could practice medicine hands-on.[xiii]

The edition held in the Leo J. McCarthy, MD, History of Medicine Room includes modifications added since the first edition. For example, Duncan added a “Collegium Casuale,” or what can be thought of as an early version of an appendix to the text. According to Duncan, this was added due to popularity and interest sparked by the first edition. Within the Collegium Casuale were the general questions, observations, records, and methodologies used to compose the data collected. The data collected included “an account of the condition of the patient,”[xiv] and notes on each patient’s age, sex, “temperament”, and “condition of life.” Interestingly, while the medical perspective in Duncan’s observations reveals new ways of viewing disease, the lingering humoral theory can be seen when choosing to list a person’s “temperament” (e.g., sanguine, melancholic, choleric, and phlegmatic). After explaining the ways in which the data was collected and assessed, Duncan catalogs the ways the data was presented and challenged in his lectures. The practice of observational work is highlighted in this historical document.

Following the Collegium Casuale, Duncan begins to list the various studies carried out at the dispensary. One of his patients, “A Case in which there occurred a peculiar morbid Sensibility of one of the Hands,” accounted a 24-year old man who came to the dispensary in April 1777 complaining of pain so severe in his left hand he could not move it. The man is named, “F-----, R-----,” and Duncan suggested “electricity therapy,” for the ailing man.[xv] A general skimming of cases beyond F.R. show the common use of electrotherapy in 18th century medicine. Duncan in this case expresses wariness towards electricity therapy in medicine yet offers it to almost every patient. In line with the enlightened era, it is actually quite normal to see what initially was so commonplace (electricity therapy) come into question. Duncan and many of his peers were aware of the potential the medical field had. Driven for advancement, the dispensary and publications such as these for public consumption demonstrate the growing interest in the field.

All the cases assessed and collected for Duncan’s Medical Cases were in fact provided by the Public Dispensary.[xvi] The dispensary had a major impact on public health in Edinburgh. Advances in community health was positively affecting the overall quality of life for residents of all classes. As the dispensary expanded branches devoted to pharmacy and vaccinations, crucial landmarks in the medical field, were established.[xvii] Over time, work in the Dispensary became an established core for the curriculum at Edinburgh University.

Duncan went on to found the Royal Edinburgh Hospital for Mental Disorders in 1807 at Morningside.[xviii] Emphasis towards communal health and a desire to understand those with mental disease became his focus later in life. In his later years, Duncan became the First Physician to the King of Scotland in 1821.[xix] His compassionate nature for the destitute superseded any noble accreditations. Duncan’s institutional pursuits were noble, and his reconstruction of medical education contributed to the ways aspiring physicians learn in residency to this very day.

[iii] John Chalmers, Iain Chalmers, and Ulrich Tröehler, "Helping Physicians to Keep Abreast of the Medical Literature: Andrew Duncan and Medical and Philosophical Commentaries, 1773–1795,” Journal of the Royal Society of Medicine 112, no. 1 (2017): 36-47, https://www.jameslindlibrary.org/articles/helping-physicians-keep-abreast-medical-literature-andrew-duncan-medical-philosophical-commentaries-1773-1795/.