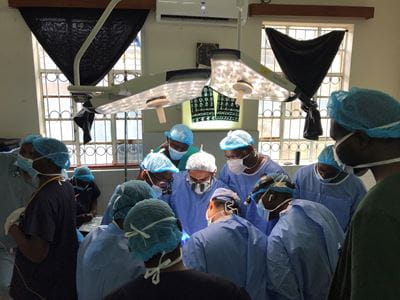 Performing surgery inside a small hospital operating room in Eldoret, Kenya, more than a dozen medical students, residents and attending physicians huddled around Avinash V. Mantravadi, MD, and Kazim Alwani, MD, observing their every movement in the hopes of learning more.

With sunlight beaming through the windows and surgical lights hanging above, sweat dripped down their faces as they performed surgery on a patient to remove a salivary gland tumor.

There was not an inch to move,” Mantravadi said, describing the confined operating room the doctors were working in.

Although it was hot and cramped, that didn’t bother the eager learners inside. They returned day after day for nearly two weeks to build up their skills and watch the surgeons work.

The nearly two-week trip to Kenya built upon a long-standing collaboration between the department and AMPATH—a partnership between Moi University (MU), Moi Teaching and Referral Hospital (MTRH) and the AMPATH Consortium of North American universities, led by Indiana University. 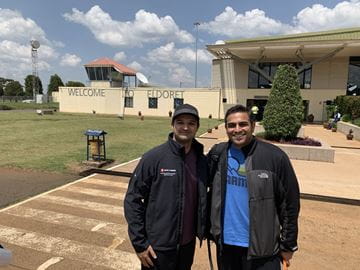 When Mantravadi and Alwani first arrived at Moi Teaching and Referral Hospital, they jumped right into clinic, signing up patients for surgery. The two joined nine other residents and physicians who flew to Kenya from the United States for the hospital’s ear, nose and throat (ENT) camp.

While surgery was top on the list of duties for the program, teaching went hand-in-hand.

Eleven medical students and two residents from Moi signed up for the program, along with three attending physicians from the hospital. Another six physicians traveled to Eldoret from Nairobi, including one Nairobi resident from Zambia and one from Cameroon.

Near the start of their nine days of service at the hospital, the group of medical learners and teachers quickly “hit the ground running,” Mantravadi said, despite most not knowing one another.

“To see the level of cohesion that develops when people have such a shared mindset and a shared common goal was really fascinating,” Mantravadi said. “Things were seamless. It was neat to see how that matured pretty much immediately.”

For Alwani, the trip was a sort of homecoming. He earned his medical degree from Kilimanjaro Christian Medical College in Tanzania, south of Kenya. He said it was satisfying to teach the medical students in Eldoret—and also communicate in Swahili—using the skills he’s learned from department faculty during his four years at IU School of Medicine. Being trained in Tanzania, Alwani said he relates to those in Eldoret.

“One of those medical students in the corner was me a few years ago,” Alwani said.

Susan Cordes, MD, a former associate professor of otolaryngology at IU School of Medicine and current volunteer faculty for the department, started taking trips to Eldoret in 2009. She helped created an “ENT camp” at the hospital a year later, and she’s visited there 10 times since.

The program at the hospital is led by Henry Nono Ngoitsi, MMed, the coordinator of the ENT camp; Sisenda M. Titus, MMed; Owen Menach, MMed; and Makaya I. Denge, MMed. 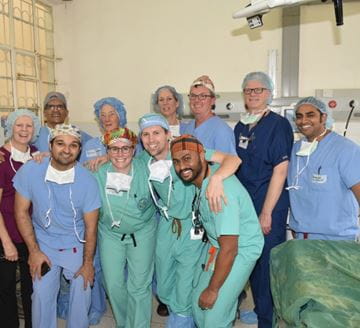 Although Cordes represented IU School of Medicine on a volunteer basis at the ENT camp, no IU otolaryngology faculty members had visited Eldoret since 2013, until last month, Mantravadi said.

“This allowed us an opportunity to continue to collaborate and reinvigorate the program,” Mantravadi said, “and that wouldn’t be possible without her leadership over so many years and the infrastructure that she laid. It’s a lot of tireless work, but it’s very inspiring to many young faculty members.”

Cordes first traveled to Kenya as a senior medical student at IU School of Medicine, before the IU-Moi partnership in Eldoret got off the ground. She instead traveled to Lugulu, a small town west of Eldoret.

“I always knew I wanted to go back,” Cordes said. “After I was there, I felt a really strong compulsion to go back when I had more training and could be more useful.”

Over the years, Cordes has gathered supplies for the hospital and university, which she’s received through word of mouth from colleagues, hospitals, and various donation organizations. As the program has grown, so has the amount of medical materials.

With a renewed interest among department of otolaryngology faculty to grow their partnership through AMPATH, Mantravadi said he hopes to expand the number of trips faculty and residents take each year to two over the next two years. Eventually, with buy-in from other universities in the AMPATH Consortium, they have a goal to host four ENT camps a year. 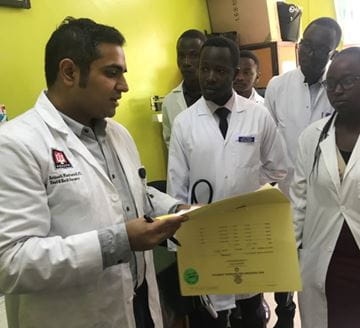 Cordes said they’re also actively working to create an ENT residency program at MU. She would also like to see more faculty from other otolaryngology subspecialties get

Each year, the bonds both personally and professionally between ENT physicians in the United States and Kenya grow, Cordes said, ensuring the success and growth of the program. involved with the ENT camp; they’ve mainly focused on head and neck surgery.

“I’ve really learned the value of relationships,” she added.

Alwani said he’s grateful the leaders of the Department of Otolaryngology—specifically the department chair, Jonathan Y. Ting, MD, MS, MBA, and the resident program director, Taha Z. Shipchandler, MD—are fully supportive of the program, and want to see it expand.