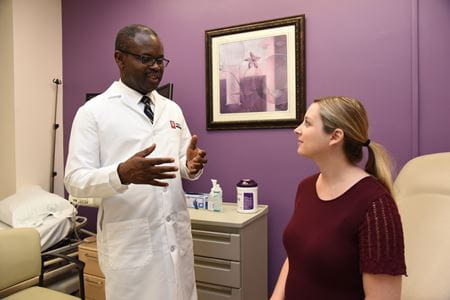 As SARS-CoV-2, the novel coronavirus that causes Coronavirus Disease 2019 (COVID-19), continues to disrupt daily life for millions of people around the world, researchers and physicians are quickly learning all they can about the virus as it spreads. Among many of the questions they want to answer: how does COVID-19 affect pregnant women?

When it comes to pregnant women and the coronavirus, there are currently more unknowns than knowns. With over a million and a half cases worldwide, relatively few reported cases have been in pregnant women, which makes research in this area limited.

“The initial published data is from China where it first started, and now there are also a couple of published papers from New York where the epidemic is at its peak,” said Method Tuuli, MD, MPH, professor, vice chair for obstetrics and director of perinatal research at IU School of Medicine Department of Obstetrics and Gynecology. Tuuli is also a maternal-fetal medicine specialist at IU Health and medical director of the labor and delivery unit at Methodist Hospital.

“The largest study so far was about 43 pregnant patients who had COVID-19. Curiously, about one in three of them presented with normal pregnancy symptoms, then later on developed symptoms of COVID-19, were tested and found to be positive. There’s a lot of guidance that is coming from different societies and experts, but most of this is from very little pregnancy data.”

Pregnant women are generally considered at an increased risk of viral infections, such as influenza, because of the changes happening in their bodies. While the early data suggest that pregnant women who develop COVID-19 pneumonia have approximately the same rate of intensive care unit admissions as in the non-pregnant population, the data are limited to small case series. It is still unclear if pregnant women have a greater chance of getting COVID-19 than others. But because new cases are emerging every day, obstetrician-gynecologists are getting new information and guidelines on how to treat their patients every day as well.

“Everything is changing daily or even hourly,” Abernathy said. “We have been delaying some appointments. For many patients coming in for a routine anatomical survey we’re saying, ‘let's delay it until we get past this steep curve phase and just keep it safe.’”

The most common symptoms of COVID-19 include fever, cough and shortness of breath, but some may have other symptoms such as diarrhea, nausea and vomiting or no symptoms at all and still carry the virus. If a pregnant woman tests positive, one major concern is how to protect her baby.

“There's been a question of whether this is transmissible to the baby in the uterus or not,” Tuuli said. “Initial reports said no, but more recent reports indicate there is a possibility. Watching these cases and studying the emerging data carefully will help clarify some of those questions.”

“If a pregnant woman is infected and delivering soon, you don't have the risk of a congenital anomaly, so we don't have that concern,” Abernathy said. “I think the biggest concern is mother's health and if mom develops severe respiratory compromise, she might have to be intubated.”

So far, the virus has not been detected in amniotic fluid or in a mother’s breastmilk. But it’s still unclear whether a mother who tests positive for COVID-19 can pass it to her newborn baby.

Right now, many hospitals are putting temporary restrictions in place because of COVID-19, such as increased visitor restrictions, canceling non-essential procedures and seeing patients virtually when possible. There is a push to test all pregnant women when they arrive at labor and delivery, since as many as 1 in 3 pregnant patients with COVID-19 may only present with pregnancy symptoms, according to early reports from New York.

“We are planning and thinking through this carefully to provide the best care as much as possible for our pregnant patients,” Tuuli said.

While these extra precautionary measures are likely only temporary, Abernathy and Tuuli said they’re still important to keep everyone safe.

“We are in a business where we usually would like to tell people, don't worry about things,” Tuuli said. “I don't think that this is one of those things where we can say that with certainty. Rather, we absolutely want our pregnant women to follow the precautions that are recommended. Stay home as much as you can, wash your hands frequently, and if you have to be out in public, follow the Centers for Disease Control and Prevention (CDC) recommendation to wear a mask.”

“It’s scary times, but I think it’s better to be safe and stay home,” Abernathy said. “If it’s not urgent or emergent, then just stay put.”

Learn more about coronavirus research and news at Indiana University.